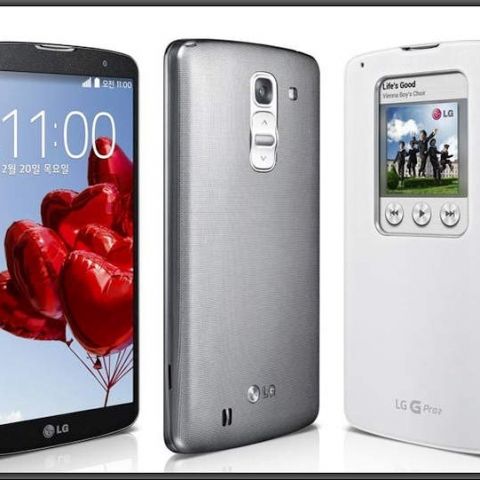 LG has launched the much-awaited successor to the Optimus G Pro, the LG Pro 2 smartphone in India for Rs. 51,500. The smartphone is available at a discounted price of Rs. 49,900 through e-commerce website Snapdeal.

The LG G Pro 2 was announced by LG in February at the Mobile World Conference. The smartphone runs Android 4.4 KitKat OS out-of-the-box. It has a 5.9-inch full-HD IPS display with 1080x1920 pixels resolution. The smartphone has a quad-core Qualcomm Snapdragon 2.26GHz processor coupled with 3GB of RAM. It has a 13MP rear camera with LED flash and an Optical Image Stabilizer Plus. The smartphone houses a 2.1MP front-facing camera as well. It supports 4K Ultra HD recording, wit Magic Focus, Natural Flash, Flash for Selfie, and Burst Shot.

The LG G Pro 2 supports advanced connectivity options including Bluetooth, Wi-Fi, GPS/ A-GPS, GPRS/ EDGE and 3G support. It packs a 3,200mAh battery. The smartphone is available in Titan Black, Silver and White colours. It's 16GB variant is priced at Rs 51,500 while the 32GB variant is expected to be launched soon for Rs 53,000 (approx). The smartphone will compete with Samsung's Galaxy Note 3, which was launched for Rs 49,990.

Soon Kwon, MD, LG India commenting on the launch said, "We launched the G Pro last year in the Indian market and received an exceptionally favorable response from consumers. Following the success of the G Pro, we are launching the new G Pro 2, with enhanced features, based on the feedback of our consumers. The year 2014, is going to be an exciting year, as LG plans to bring out a string of innovative devices, which will capture the imagination of users. By year end, we intend to take on 10% share of the Indian smartphone market."