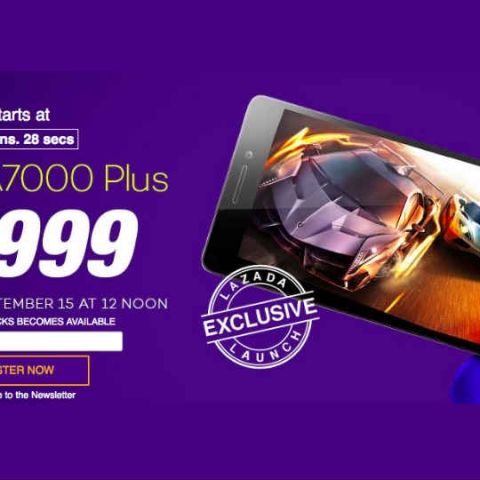 Beijing based technology giant, Lenovo has announced the launch of the Lenovo A7000 Plus smartphone. The device has been unveiled in the Philippines and will be available there from 15th of September. The A7000 Plus is priced at PHP 7,999 (Rs. 11,350 approximately).

The Lenovo A7000 Plus is a successor to the Lenovo A7000. The A7000 Plus features a 5.5-inch 1080p display. The rear houses a 13MP camera where as the front has an 8MP camera. The device has 16GB built-in storage expandable via a microSD card. Under the hood a 64-bit octa-core MediaTek MTK MT6752 chipset with 2GB of RAM powers the device. It features a 2900mAh battery. It runs on Android 5.0 Android Lollipop out of the box and also boasts of 4G LTE connectivity. On paper it looks like the Lenovo A7000 Plus is a significant improvement over the A7000.

Lenovo’s most popular smartphone in the recent past has to be the Lenovo K3 Note. The K3 Note was a significant improvement over the A7000 and is priced at Rs. 9,999. If you are one with a budget of 10K, then we have the perfect smartphone recommendations in our Ask Digit segment. We also take a look at the top 3 smartphones you can buy for a budget of Rs. 15,000 and Rs. 25,000.

In the recent past, Lenovo has announced a bunch of interesting smartphones such as the Lenovo Vibe Shot and the Lenovo Phab Plus that sports a 6.8-inch display treading onto tablet territory. Just a few days ago Lenovo started rolling out the Android 5.0 Lollipop update for the A6000 and the A6000 Plus. Have you received your update?