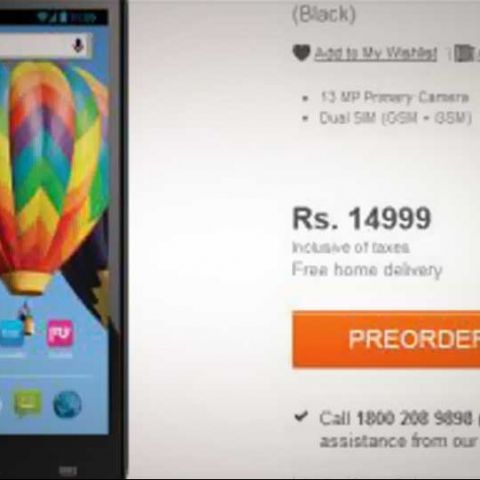 After the launch of Micromax's first full-HD handset, the Canvas Turbo, now Karbonn has stepped into the ring with its own full-HD smartphone, dubbed the' Titanium S7', which is now available for pre-order at Flipkart for Rs.14,999.

The smartphone is the first full-HD 5-inch smartphone from Karbonn, and the most powerful in their current line-up. Under the hood, the Titanium S7 will be powered by a 1.5GHz quad core processor and runs on Google's Android 4.2 Jelly Bean operating system. It sports 16GB of internal memory, as well as a microSD memory card for expansion.

It will also feature a 13 megapixel rear shooter along with a 2MP front camera for video calling. On the connectivity front, it will support 3G connectivity, Wi-Fi and Bluetooth support, and has a built-in GPS receiver.

Much like other Karbonn smartphones, this one also has support for dual-SIM(3G 2G GSM). To everyone's surprise, the online retailer fails to mention the on-board RAM and battery capacity.

The Titanium S7 is going to be up against the likes of Micromax Canvas Turbo and Gionee Elife E6, considering the price bracket with the Canvas Turbo priced at Rs. 19,000 and Gionee's E6 priced at Rs.22,000, unless the Titanium S7 disappoints us with only 1GB RAM (which is highly unlikely), the S7 is basically the exact same package for a lot less.

We have provide a small table below for a quick comparison of three smartphones mentioned above.

For more details check the links below: