JioPhone pre-order starts today at 5:30PM: Everything you need to know about the 4G VoLTE feature phone

Reliance Jio's JioPhone will be available for pre-order via the company's website and the MyJio app starting 5:30 PM today. The 4G feature phone is aimed at 500 million feature phone users in the country. 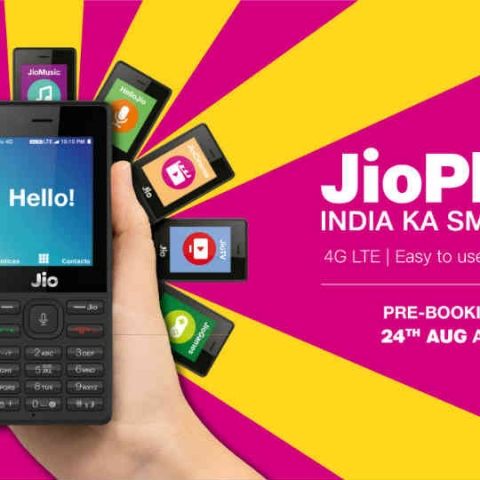 JioPhone, the 4G feature phone from Reliance Jio, will be available for pre-orders starting today at 5:30 PM. The feature phone with 4G support can be booked via Jio's website or the MyJio app. The handset can also be booked via offline retail stores or by sending an SMS and it is expected to become available later in September.

To recall, JioPhone is the next big bet from the Mukesh Ambani-led company since the debut of its VoLTE services in September last year. With JioPhone, Reliance Jio aims to convert nearly 500 million feature phone users in the country into 4G users. Jio has over 123 million subscribers but its user acquisition has stalled in the past few months. The company needs to convert feature phone users into 4G subscribers in order to tap into next set of users.

The JioPhone will be available at a one-time refundable deposit of Rs 1,500. At the launch last month, Ambani confirmed that the deposit will be fully refunded after 3 years on the return of the used JioPhone. The company has confirmed that it will collect Rs 500 today at the time of booking and remaining Rs 1000 when the handset gets delivered next month. Jio has already begun beta-testing the feature phone and it plans to make 5 million units available every week.

In terms of features, JioPhone sports a 2.4-inch QVGA display and includes a voice assistant that can be used to navigate the device or initiate voice calls and send text messages. There is a 4-way navigation key and the handset offers an alphanumeric keypad. It includes a 2MP rear and 0.3MP front camera and there is 4GB of internal storage expandable via SD card slot. The feature phone uses either Spreadtrum 9820A or Qualcomm Snapdragon 205 mobile chipsets. It has 512MB RAM and runs a custom operating system called KAI OS.

JioPhone buyers can enroll to Jio's Dhan Dhana Dhan offer with a monthly recharge of Rs 153. The Rs 153 plan offers unlimited 4G data with FUP of 500MB per day and free calling and SMS benefits. Additionally, JioPhone users can also make sachet recharges of Rs 24 for 2 days validity and Rs 54 for a week long validity. With the JioPhone, Reliance Jio is primarily trying to push the adoption of Jio apps which offers live TV, music streaming among other features.

On the connectivity front, JioPhone offers Wi-Fi, Bluetooth 4.1, GPS and near-field communication, and Jio plans to enable digital payments with a future update.The company says JioPhone users can also recharge with Rs 309 and use the supplied cable to stream the content from their 4G feature phone on a large-screen LCD or CRT TV. The JioPhone is an ambitious device from the company but there are already reports of Idea Cellular and Bharti Airtel working on their own competitors. It remains to be seen whether Jio succeeds in adding more subscribers to its base with its 4G feature phone.