Chinese smartphone manufacturer iQOO launched 2 smartphones under the Neo 7 series namely, iQOO Neo 7 and iQOO Neo 7 SE in China. Now, as per a recent listing on Bluetooth Special Interest Group certification, the Indian variant of the new iQOO Neo 7 could differ from the Chinese variant. As per it, it is very likely that iQOO will be rebranding iQOO Neo 7 SE and launching it in India as iQOO Neo 7. 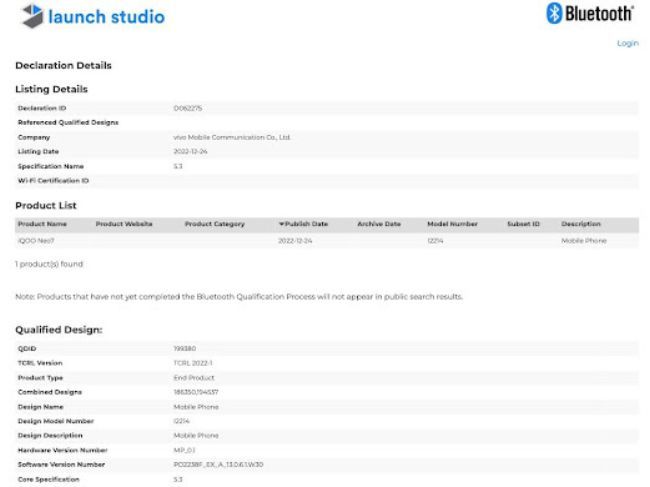 The Bluetooth listing reveals a good amount of information about the Indian variant of the iQOO smartphone. The software version “PD2238F_EX_A_13.0.01.W30” along with the Indian variant with Bluetooth 5.3 support can be seen in the Bluetooth SIG listing. A recent benchmark result from GeekBench shows the software version of iQOO Neo 7 SE (Chinese version) as V2238A and this information combined with the surfaced SIG listing suggests that iQOO Neo 7 will be actually a rebranded iQOO Neo 7 SE.