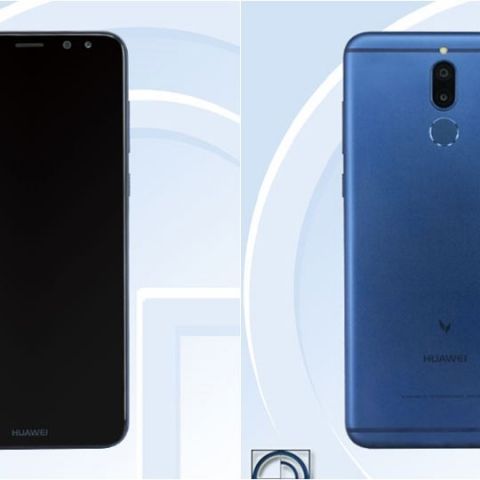 Huawei, China's leading smartphone maker, is all set to introduce its next flagship Mate 10 series at an event in Munich on October 16. The smartphones are expected to feature a new full-screen display with 18:9 aspect ratio and use company's newest Kirin 970 chipset. Ahead of the launch, TENAA has certified a new Huawei smartphone that could belong to its upcoming Mate series.

The certification listing reveals that the smartphone sports a 5.9-inch display with a Full HD+ resolution of 2160 x 1080 pixels. The display offers 18:9 aspect ratio and is codenamed RNE-AL00 or Maimang 6. Noted tipster Evan Blass had recently reported that Huawei's next Mate series is codenamed Blanc, Marcel and Alps.

The TENAA certification suggests the device measures 156.2 x 75.2 x 7.5mm in dimension and comes with 4GB RAM and 64GB expandable storage. The smartphone is powered by an octa-core processor and houses a 3240mAh battery. It also features four cameras with dual camera setup on the front as well as the back. The RNE-AL00 gets a combination of 16MP + 2MP sensors on the back while the front camera setup includes a combination of 13MP + 2MP sensors. The setup, however, seems like a downgrade from the one found on Mate 9 and P10 series.

A recent leak claimed that flagship Mate 10 will feature a 5.99-inch display with a resolution of 2880 x 1440 pixels and offer a bezel-less design. The device codenamed Blanc is also said to offer a combination of 20MP + 12MP rear camera setup. The new RNE-AL00 certified by TENAA might be a cheaper version of flagship Mate series and could debut under company's Honor brand.