Oppo just released its flagship Find X and Find X Lanborghini Edition phones, giving us a glimpse at the future of bezel-less smartphones. However, other smartphone manufacturers are not far behind as it seems like Huawei has also found a way to make super thin-bezel smartphones that might come close to the Oppo Find X or the Vivo Nex. As per a report by LetsGoDigital, via Wccftech, the Huawei filed a patent in February 2018 that details a unique build process, which could allow the company to rid bezels from their smartphones. The patent was reportedly approved on June 7 this month and it tips at a smartphone with a rectangular housing and a full-screen display.

As per the report, the patent describes the use of new framing process as the existing ones are hampering the installation of edge-to-edge display on a device. The company could work around this issue by using metal strips that are glued to the sides of a device. This can be done “in a professional manner” using double-sided adhesive tape or glue so that it does not affect the waterproof and dust-proof capabilities of the smartphone. The rear panel is also shown to play a crucial role in the process as it houses the display. Alongside the side metal strips, the screen would also be fixed on the top of the rear panel using adhesive and this is said to help Huawei in achieving a smartphone with a high screen-to-body ratio. 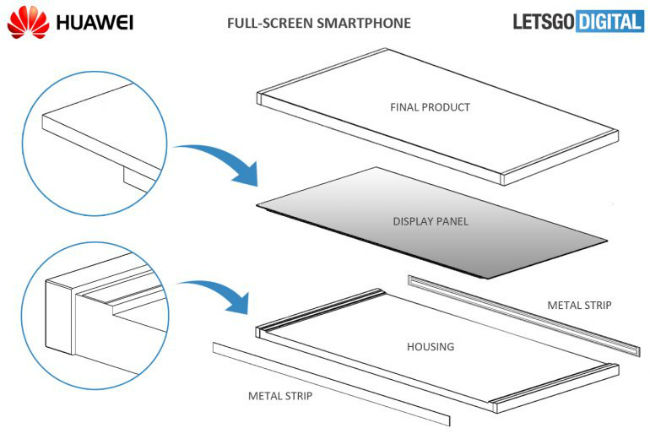 The patent is titled “Mobile Communications Device” and it can be applied to phones and tablets. It also states that there might still be a narrow bezel on the top and bottom of the screen and the new design process is said to give anti-static properties to the device. However, we are not really convinced about the durability of a handset that is put together using adhesive. Almost all internals of today's smartphones are soldered together to ensure durability and resistance to electrical shorting. This also ensures that the internal components don’t fly loose when the handset is accidentally dropped. In any case, companies keep applying for patents all the time, but this doesn’t ensure that the technology will be used in an upcoming device or in any of the company’s devices at all.

Speaking of patents, Motorola was recently granted a patent that it filed on June 14. The patent mentions a technology that can help a foldable smartphone with flexible OLED display bend without being damaged. As per the patent, the bendable Motorola smartphones could feature a thermal element and an integrated temperature sensor. The element is said to increase the temperature of the display around a hinge to counter the effect of semi-permanent deformation or bending of the display. The temperature sensor could be integrated with the hinge (or hinges) and measure the temperature when the display is in the bent position and note how long has it been in a curved position. You can read more about this patent here.