Huawei’s first 5G smartphone expected to arrive in 2019, could be the Mate 30 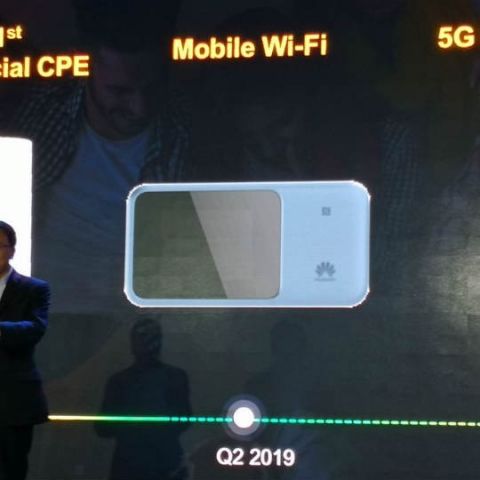 It looks like Huawei plans to launch its first 5G smartphone in the second half of 2019. This information comes from images of a slideshow which was presented at the the company’s global analyst summit in Shenzhen. Before the release of the smartphone however, It looks like Huawei will launch the first 5G mobile hotspot. The 5G mobile hotspot will launch in Q2 of 2019.

At MWC 2018, Huawei showcased the Balong 5G01 modem. It is expected that this modem will be present in the Huawei 5G mobile Hotspot. Both the 5G smartphone and the hotspot devices are expected to have base bands that will be developed in house by Huawei.

If speculations circulating the Internet are to be believed, then the first Huawei 5G smartphone could be the Mate 30.

Huawei has also been conducting 5G trials in India, in partnership with Airtel. Huawei and Bharti Airtel recently announced that the duo successfully conducted 5G network trials under a test set-up in India. The 5G trial was conducted at Airtel's Network Experience Centre in Manesar (Gurugram). During the test trial, a user throughput of more than 3Gbps was achieved.

While we are still in the era of 4G smartphones, Huawei unveiled its latest P20 and P20 Pro smartphones at an event in Paris. A teaser has released on the companies India Twitter handle teasing an India launch of the device. The tweet reads, “Put aside the many for the one that’s here to deliver you all. #SEEMOOORE #HuaweiP20Series #HuaweiP20Pro”. The Huawei P20 has been priced at EUR 649 (Rs 52,200 approx) in Europe, whereas the P20 Pro costs EUR 899 (Rs 72,300 approx). The devices are speculated be priced the same or slightly lower in India.

Huawei’s P20 and P20 Pro smartphones come with an AI-powered camera and proprietary optics which have been "co-engineered" with Leica. Coming to the specifications, both the smartphones are powered by the company’s latest Kirin 970 SoC, which is equipped with a dedicated Neural Processing Unit (NPU) onboard and are running on EMUI 8.1 based on Android 8.1 Oreo. The Huawei P20 Pro sports a 6.1-inch full-HD+ OLED FullView display whereas the P20 comes with a 5.8-inch full-HD+ RGBW screen. The P20 and P20 Pro come with 4GB and 6GB RAM respectively and they both sport 128GB of internal storage. The company has managed to accommodate a home button on the front the smartphones, which supports 'edgeless fingerprint' feature. It can recognise gestures like a short tap for back, long tap for home, and swiping left or right for multi-tasking.

The highlight was the triple camera setup on the P20 Pro. The P20 Pro features a 40 MP RGB 1/1.7-inch sensor, a 20 MP monochrome sensor and an 8MP sensor with a telephoto lens on the rear. The telephoto lens is capable of 3x optical zoom. Its rear camera also supports 10x digital zoom, a laser transceiver for faster autofocus, 5x lossless hybrid zoom, a Leica colour temperature sensor, and a high ISO range of up to 102400, which the company said is at par with the Canon 5D Mark IV. The Huawei P20 features a dual rear camera setup with a 12MP 1/2.3-inch RGB sensor with a f/1.8 aperture and a 20Mp RGB sensor with a f/1.6 aperture lens.

Both P20 and the P20 Pro are equipped with a 24.8MP front-facing camera, which supports a 3D portrait lighting effect feature. Using the feature, users can change the lighting in an image after capturing it.

First @Huawei 5G smartphone with its own 5G chipset coming in 2H 2019. Which mostly points to the Mate series.#HAS2018 pic.twitter.com/8k5qThGEmp