Huawei has sent out press invites for the 24 February. The date for their event is just one day before the beginning of MWC 2013. At the event Huawei is expected to show off the rumoured P2 that boasts of an eight-core processor. 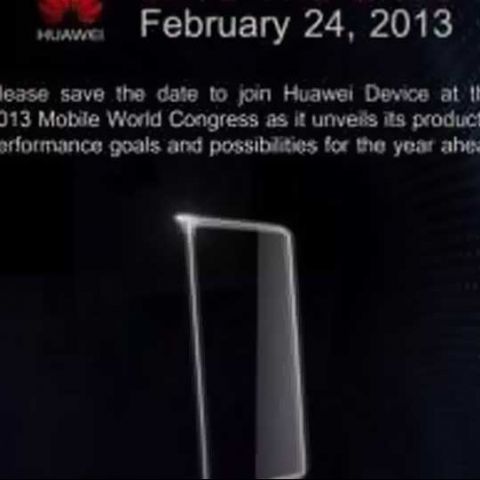 Huawei has sent out press invites for February 24. The date for their event is just one day before the beginning of MWC 2013. At the event Huawei is expected to show off the rumoured Ascend P2 that boasts of an eight-core processor.

With an eight-core processor, we are really curious to see what the smartphone will be capable of. Today we have quad-core devices available in the market with 2GB RAM. These devices are powerhouses when it comes to performance, but they consume a lot of battery. We can’t wait to see what other specifications the Ascend P2 holds under the hood.

Leaks on the Internet suggest that the Ascend P2 will have a 5-inch 720p HD IPS display, eight-core processor along with 2GB of RAM, 8GB built-in storage, Android 4.1 Jelly Bean straight out-of-the-box, and a 3,000mAh Li-on battery to power it all.

Huawei is also expected to unveil a smaller version of the P2. Called the Ascend P2 mini, the device will have a 4-inch display with a 1280x720 pixel resolution. The smartphone is expected to run on Android 4.1 Jelly Bean. It is also expected to have an 8MP rear facing camera and 1GB of RAM along with a dual-core processor.

At CES 2013, Huawei showcased the Ascend Mate and the Ascend D2. The Ascend Mate has a 6.1-inch display with a 1280x720 IPS display and has a 1.5 GHz Hi-Silicon quad-core processor under the hood combined with 2GB of RAM. It runs on Android 4.1 Jelly Bean straight out of the box and is powered by a 4050mAh battery. The Android OS is skinned with Huawei’s Emotion interface. It has an 8MP AF rear-facing camera with HDR and 1MP HD front-facing camera for video calls.

The Ascend D2 will sport a 5-inch IPS display has a resolution of 1920x1280 pixels and runs on Android 4.1 Jelly Bean straight out-of-the-box. The OS is skinned with Huawei’s Emotion interface. In terms of specifications under the hood, the D2 has Huawei’s K3V2 1.5 GHz quad-core CPU along with 2GB of RAM. It has a whopping 13MP BSI rear-facing camera along with a 1.3MP front-facing camera for video calls. It also sports a 3000mAh battery.