Even though the Huawei P30 Lite, the Redmi Note 7 Pro and the Oppo R17 Pro are priced differently, they go up against each other in terms of hardware and specifications. 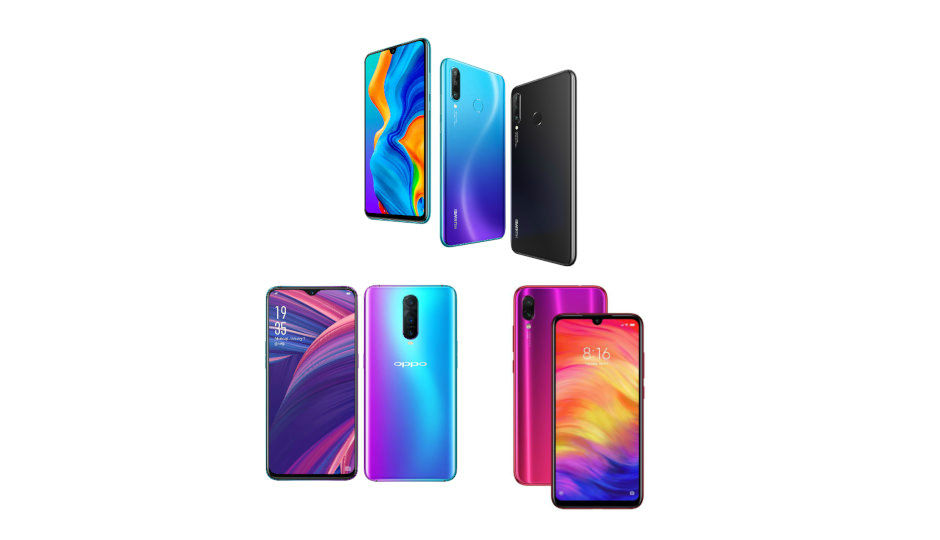 Huawei has announced its P30 series of handsets in India, which, alongside the P30 Pro, also includes the P30 Lite. The new phone will go up against handsets in the mid-range segment, like the Redmi Note 7 Pro and the Oppo R17 Pro(₹ 21990 at amazon). The latter two handsets feature similar specifications that are comparable, even though the three target a different price segment of the mid-range smartphone market. If you are on the lookout to buy a mid-range phone, this hardware based comparison of the Huawei P30 Lite, Redmi Note 7 Pro and Oppo R17 Pro should help clear some things up. 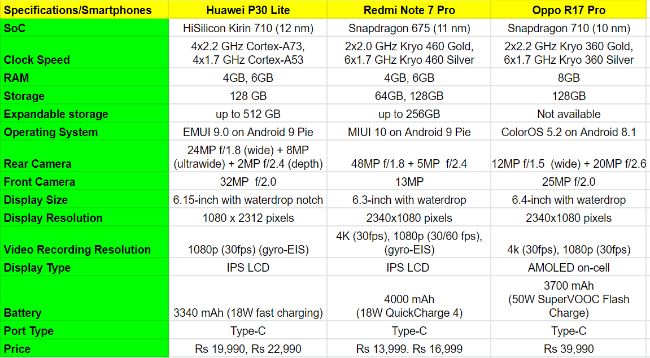 When we talk about display and design, the trio sport a similar front panel design with almost the same display size and the same can be said for their back panels as well. The new Huawei P30 Lite sports a 6.15-inch IPS LCD display with a 1080 x 2312 pixel resolution, while the Redmi Note 7 Pro features a 6.3-inch IPS LCD panel with 2340x1080p resolution. The Oppo R17 Pro sports a 6.4-inch AMOLED on-cell display panel and has 2340x1080 pixel resolution. All the three phones come with a waterdrop notch display type but the R17 Pro has a clear advantage here with a better AMOLED display panel type.

In terms of optics, the Huawei P30 Lite and the Oppo R17 Pro sport a triple rear-camera setup, while the Redmi Note 7 Pro features dual cameras. The P30 Lite is equipped with a 24MP sensor that is paired with an f/1.8 aperture wide angle lens, an 8MP sensor with ultrawide lens and a 2MP depth sensor with an f/2.4 aperture. There is a 32MP sensor on the front with a f/2.0 aperture lens.

Out of the three cameras on Oppo R17 Pro’s rear, one is a Time of Flight sensor that enables capturing of additional depth details. Then, there is a 12MP sensor with an f/1.5 aperture wide angle lens and a 20MP camera paired with an f/2.6 aperture lens. On the front is a 25 MP sensor with f/2.0 aperture lens.

The Redmi Note 7 Pro garnered interest, thanks to the 48MP main Sony IMX586 senor that is paired with an f/1.8 aperture lens. The main camera is coupled with a 5MP secondary sensor with an f/2.4 aperture lens. On the front, the device comes with a 13MP sensor.

The three handsets come equipped with a USB Type-C and support fast charging. However, the charging method used are unique for each device and their battery capacities also vary. The Redmi Note 7 Pro features the largest battery here with a 4000mAh capacity that supports 18W Quick Charge 4. The Huawei P30 Lite runs on a 3340mAh battery that also supports 18W fast charging and the Oppo R17 Pro is backed by a 3700mAh battery that can handle 50W SuperVOOC charging.