HTC has launched a mid-range Android smartphone for India, and a few other South East Asian countries. The phone is called Desire SV, and will be priced at Rs. 22,590 (MOP). It is expected to be available in India over the next couple of weeks.

This is one of the highest spec dual-SIM Android phones available in the Indian market. The phone comes with Android 4.0.4 ICS onboard (upgradeable to Jelly Bean) and the latest version of HTC Sense, version 4.0.4. Beats Audio sound enhancement is also featured.

The HTC Desire SV features an 8MP autofocus camera with LED flash, capable of 480p HD video recording. There is no front-facing camera however. The phone has 4GB of built-in storage, with a microSD slot for expansion.

In terms of connectivity, the HTC Desire SV supports 3G, Wi-Fi b/g/n with hotspot support, Bluetooth v4.0, microUSB v2.0, and GPS with A-GPS. FM radio support for now has not been disclosed.

HTC has also included 25GB of free Dropbox storage, as well as a document viewer. The Desire SV weighs in at 131 grams, and is 10.7mm thick. It runs on a 1,620 mAh battery, though talktime and standby information has not yet been provided.

There are special colours that the HTC Desire SV will come with, and the one that we got our hands on was the orange version.

We will be doing a detailed first impression story on the Desire SV very soon; so do stay tuned for that. 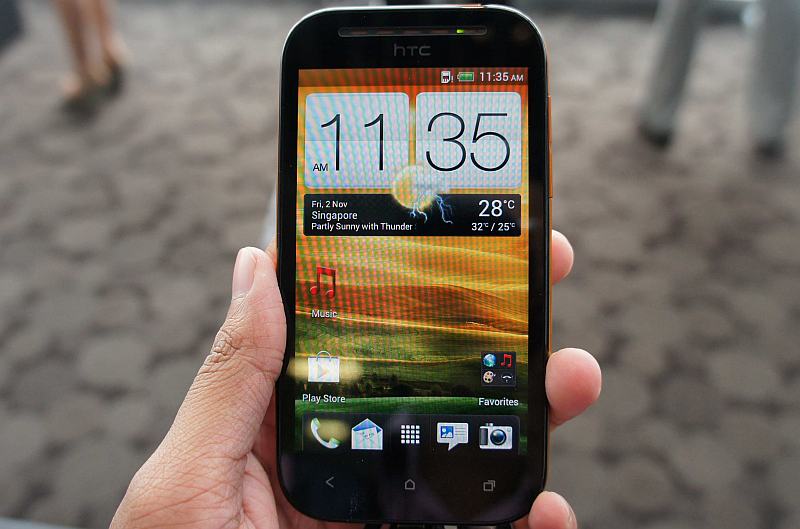