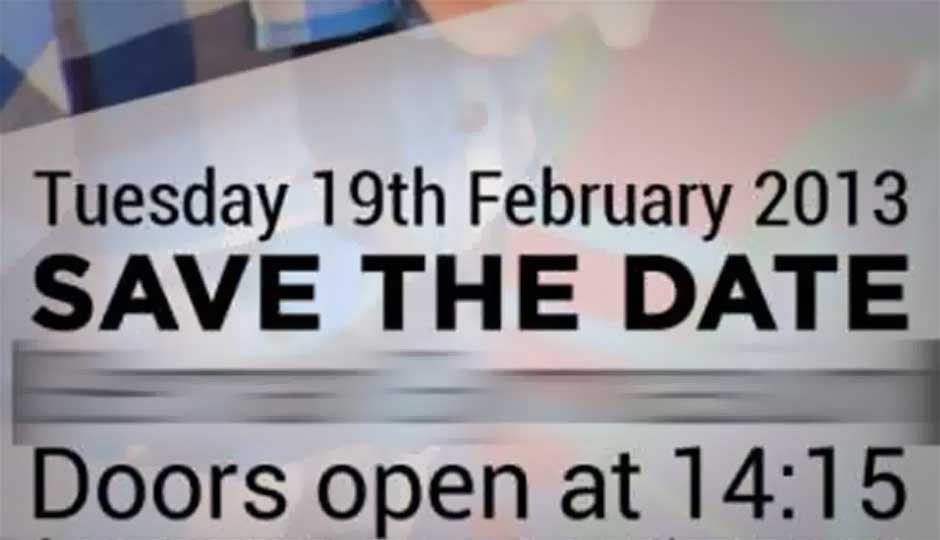 HTC has sent out invites for an event that is scheduled for February 19. The event will take place in London and New York. The London event is scheduled for 3:00PM on February 19. The event will take place at the same time in New York (approximately 10AM). In India, it will be approximately 8:30PM on the same day. The invite doesn’t say anything else apart from the date and time.

When Apple sends out invites, the invite usually has a hint of what we can expect. This HTC invite however doesn’t give any such information. What is expected however is that HTC will show off its much anticipated HTC M7 smartphone.

The HTC M7 is expected to have a 4.7-inch 1080p HD display, quad-core processor on a Qualcomm SoC, 2GB of RAM, 32GB built-in storage, 13MP rear snapper and a 2MP front facing camera for video chatting.

The M7 seems to be on the same lines as the HTC Butterfly, which was launched yesterday in India. Priced at Rs. 45,990, the HTC Butterfly is powered by a Qualcomm S4 Pro 1.5GHz quad-core processor along with 2GB of RAM. The phone runs on Android 4.1 Jelly Bean, and an upgraded Sense UI. The Butterfly has a 5-inch Super LCD3 Full HD display, a first for smartphones and the first 1080p display smartphone to launch in India.

The Butterfly comes with 16GB built-in storage, and an expansion slot. The rear camera on the Butterfly is an 8MP one, with the BSI lens, while the front one is a 2.1MP clicker with an ultra-wide angle lens. Not to forget, the Beats Audio capabilities, along with a dedicated amplifier for the built-in speakers, are a part of the Butterfly package as well.

HTC is holding this event just before MWC, which will happen from May 25 to 28.