Honor Note 10 with Kirin 970 SoC, 6GB RAM spotted on Geekbench ahead of launch

Honor Note 10 is expected to launch in China soon and the flagship device has now popped up on Geekbench. The company is skipping the Honor Note 9 and jumping to the Note 10, and as per the Geekbench listing, the upcoming device sports the codename HUAWEI RVL-AL09. As one would expect, the smartphone is running on an octa-core processor, which is most likely the company’s latest HiSilicon Kirin 970 SoC and it is coupled with 6GB RAM. The memory and processor combination is the same as the Huawei P20 Pro.

The device manages to score 1901 in single-core tests and 6818 in multi-core tests. This is slightly more than what the P20 Pro scored in our review. The P20 Pro scored 1897 in single core performance and 6667 in multi-core tests. Additionally, the Honor Note 10 is listed running on Android 8.1 Oreo. The listing doesn’t reveal any other details, but rumours suggest that it will feature a large 6.9-inch display panel, which could be supplied by Samsung. The device is also expected to feature the GPU Turbo Boost technology, which was recently announced by the company. In fact, the slight bump in benchmarking score could be the result of the new software technology. 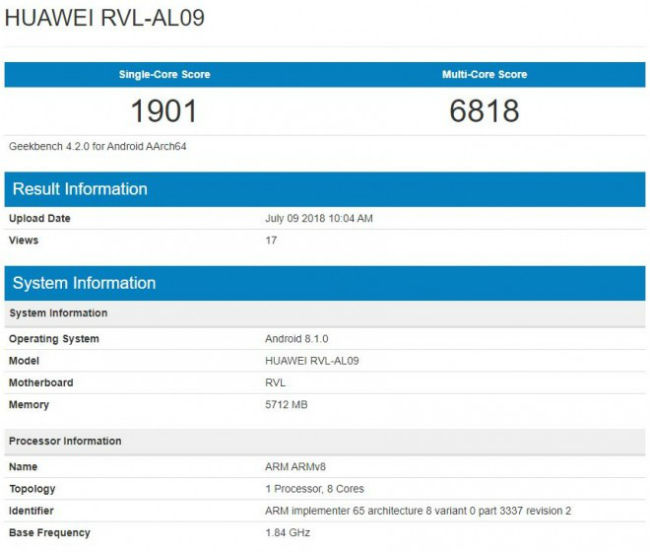 Honor last launched the Honor 10 GT in China, which comes with more RAM than the Honor 10. Alongside 8GB RAM, the smartphone is also updated with GPU Turbo technology and the company said that it enhances the device’s performance by 60 percent. At the same time, it lowers power consumption by 30 percent. Apart from the RAM, the smartphone has the same specifications as its predecessor Honor 10 (Review) that was unveiled in May in India.