The company has created a public event on Facebook titled “Nokia Mobile India Launch 2018” confirming that Nokia’s yet to be released smartphones will be made available in India during the event. 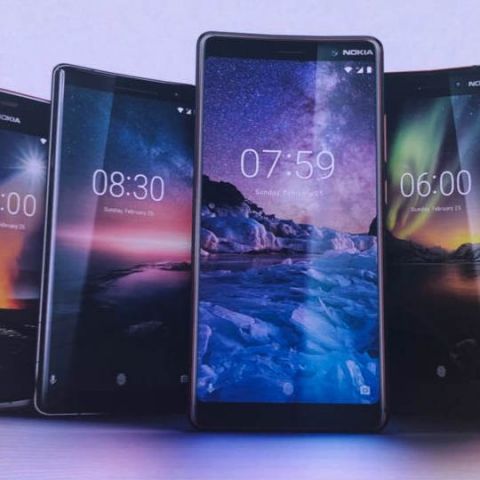 Putting all rumours and speculations to rest, HMD Global has created a Facebook event for Nokia, which is titled “Nokia Mobile India Launch 2018”. You can watch the live stream here, which will be activated once the company goes live on the specified date. The details of Nokia’s created event on Facebook reads, “Having evolved in design, technology, and style - we bring to you a new range of smartphones in India; equipped with best of Android and Google services. Join us as we unveil the next milestone for Nokia phones via Facebook Live, on April 4th at 12:00 PM.” The company will most likely be announcing its 2018 series of smartphones in India at the event, which includes the Nokia 8 Sirocco, Nokia 7 Plus, Nokia 6 (2018) and the Nokia 8110.

The above-mentioned devices were unveiled by the company at the Mobile World Congress 2018, where the company also announced that all of their smartphones, except the Nokia 2, will be a part of the Android One program. Let’s have a look at the specs of the mobile phones, which the company is expected to unveil at the forthcoming event.

The Nokia 8 Sirocco features a dual-glass design, which is protected by Gorilla Glass 5 and comes with a stainless steel frame. It’s certified IP67 for water and dust resistance and features a 5.5-inch QHD POLED display. The device is powered by the Qualcomm Snapdragon 835 SoC with 6GB RAM and 128GB internal storage. It comes with a 12MP + 13MP dual-rear camera with a wide-angle and a telephoto lens respectively. The device is backed by a 3260 mAh battery and runs on the Android One program. It was launched priced at 749 EUR (approx Rs 59,600).

The Nokia 7 Plus sports a 6-inch FHD+ display with an 18:9 aspect ratio and is powered by a Qualcomm Snapdragon 660 SoC with 4GB RAM. On the rear, it features a 12MP wide-angle and a 13MP telephoto lens dual-rear cameras, with Carl Zeiss optics. At the front, it is equipped with a 16MP camera, also with a Zeiss lens. It is powered by a 3800mAh battery and is internationally priced at 399 EUR (approx Rs 31,700).

Nokia announced the global variant of its Nokia 6 (2018) smartphone, which, till then, was exclusive to China only. The device is powered by a Qualcomm Snapdragon 630 SoC with 3GB RAM and sports a 5.5-inch Full HD display. It sports a 16MP rear camera and comes with an 8MP sensor at the front. It is powered by a 3000mAh battery and supports wireless charging. It is priced at 279 EUR (approx Rs 22,200). All the three phones above come with the ‘Bothie’ feature.

The company also released a revamped version of its Nokia 8110 or the ‘Banana phone’, which now supports 4G. Users will also be able to use it as a Wi-Fi hotspot and it runs on KaiOS, which supports Google Maps, Google Search, Google Assistant and comes with Facebook, Twitter and more apps which can be downloaded from its app store. The device comes in Black and Banana Yellow colour variants and is priced at 79 EUR (approx Rs 6,300).

The Nokia 1 was also announced at the MWC 2018, but the company has already made it official in India last month. It is powered by a MediaTek MT6737M quad-core processor and 1GB RAM with 8GB ROM. It sports a 4.5-inch FWVGA display and is powered by a 2150mAh battery. The handset runs on Google’s lightweight Android Oreo (Go Edition) OS, which is optimised for phones with low-end specifications. It is priced at Rs 5,499 in India and comes with Xpress-On removable covers, which can be purchased separately for Rs 450.