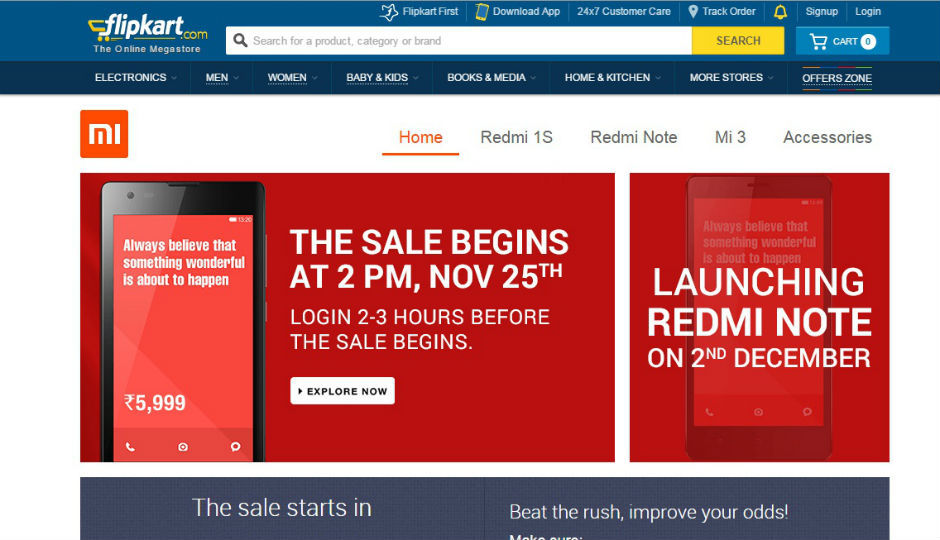 Online retailer and the biggest e-commerce player in India, Flipkart, is taking advantage of the impending Redmi Note launch to increase its Flipkart First customer base. The company today announced that the first 5000 Flipkart First customers to register for the Redmi Note will be given a priority pass and the device will be added directly to their cart. Xiaomi announced the Redmi Note in the Indian market yesterday. The device will start selling from December 2, with the 4G version being available in the second half of December.

Flipkart has been the exclusive retailers for Xiaomi till now, but the company has also taken to brick and mortar stores this time. The 4G version of the Redmi Note will be available from select Airtel stores. The company said that this would include 100 stores in six cities in the country. That said, the Redmi Note 4G will also be available on Flipkart, with a seperate registration process. Customers can subscribe to Flipkart First on the website, paying a sum of Rs. 500 for a one year subscription. It offers advantages like discounted same day delivery, free shipping etc.

The Xiaomi Redmi Note is the first phablet launched by Xiaomi in India. The device runs on a 1.7 GHz MediaTek MT6592 octa-core SoC for the 3G version and 1.2 GHz Qualcomm Snapdragon 400 SoC for the 4G version. It has 2 GB of RAM and a 5.5 inch display. The 4G version supports both FDD-LTE and TDD-LTE bands. The company is currently selling the Redmi 1S smartphone in the country.