iQOO Z5 is confirmed to be powered by the Snapdragon 778G. Here's all you need to know about it.

It is no secret that iQOO Z5 is set to break cover in China on September 23. And now, we have received exclusive information about the phone's India launch date as well. As per our sources close to the matter, the iQOO Z5 will be launched in India on September 27. We have also received information that the phone will be an Amazon exclusive. Interestingly, this information also falls in line with previous reports that the device could be launched at the end of the month.

For now, we are yet to receive any official update from the company on the matter, however, considering the device has already been teased on Amazon, we expect an official confirmation of the above-mentioned launch date very soon.

Upon its launch, iQOO Z5 is expected to become the latest mid-range offering from the company and flaunt an aggressive price tag that's under the Rs 30,000 mark. The phone will most likely be positioned as an upgrade over the iQOO Z3, bridging the gap between the iQOO Z3 and the iQOO 7. 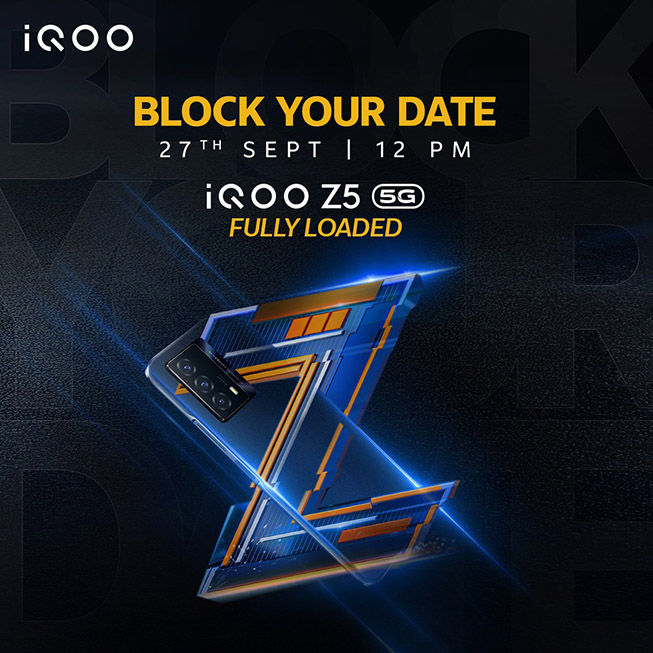 There is little else known about the iQOO Z5 at the moment, with most of the spec and feature sheet of the device remaining a mystery. However, there is information about the device that's known to the world ahead of the device's launch.

For example, the iQOO Z5 is confirmed to be powered by the Snapdragon 778G chipset which will be paired with LPDDR5 RAM and fast storage. The phone is tipped to get a 120Hz refresh rate display with a punch-hole notch cutout. This display is also said to support a 240Hz touch sampling rate and also comes with HDR10 certification.

Apart from these, the phone will likely get stereo speakers and support for Hi-res audio. The phone has also been confirmed to come with a 5,000mAh battery that iQOO claims can offer up to 96 hours worth of music playback, 18.3 hours of video playback, and 10.4 hours of gaming. More information about the device is expected to be available once the iQOO Z5 goes official in China on September 23.