The event poster also hints that the Redmi 6 Pro will be powered by the Snapdragon 625 SoC and have a 4000mAh battery. A set of photos shared on Weibo confirms a notch.

Xiaomi has announced that its much awaited Redmi 6 Pro and the Mi Pad 4 will be launched on June 25. Xiaomi unveiled two posters of the launch event in China mentioning the names and the launch date of the products. While the Mi Pad 4, as the name suggests, is the successor to the Mi Pad 3 that was launched in April last year, the Redmi 6 Pro is a mid-segment device that is expected to come with a notch. A tipster also posted a few images on Chinese microblogging platform Weibo which are claimed to be of the upcoming Redmi 6 Pro. 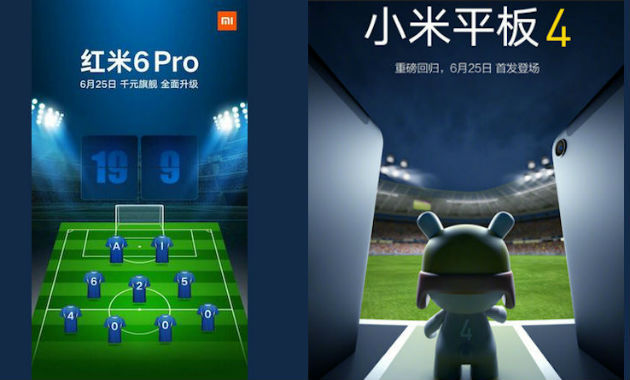 A Xiaomi phone, anticipated to be Redmi 6 Pro, was previously spotted on TENAA with the model number M1805D1SE. The listing tipped that the phone has a notch and the display has a 19:9 aspect ratio. If you look at the poster carefully, Xiaomi has hinted at a 19:9 aspect ratio display for the redmi 6 Pro. As far as the specs of the smartphone are concerned, the TENAA listing revealed that the Redmi 6 Pro could be powered by an unknown 2.0GHz processor and feature a 5.84-inch Full HD+ display. However, the poster suggests Qualcomm Snapdragon 625 SoC will run the device.

Further, the phone could come with a 12MP + 5MP dual rear camera setup, with Artificial Intelligence (AI) powered features, and may pack a 4000mAh battery. On the software front, Redmi 6 Pro is expected to have Android 8.1 Oreo OS. The photos on Weibo revealed that the Redmi 6 Pro will come with MIUI 9.6 and like in other Xiaomi phones, the recently launched MIUI 10 will be rolled out later this year.

As for the Mi Pad 4, the tablet could be powered by a Qualcomm Snapdragon 660 octa-core processor and feature a display with 18:9 aspect ratio. It might feature a 13MP single rear sensor and on the front, come with a 13MP camera. The handset will reportedly house a 6000mAh battery.

Last week, a report claimed that, the company’s website has references to the aforementioned devices along with Mi Max 3, thus confirming their existence. It is speculated that these products will be launched in China first, followed by other markets.