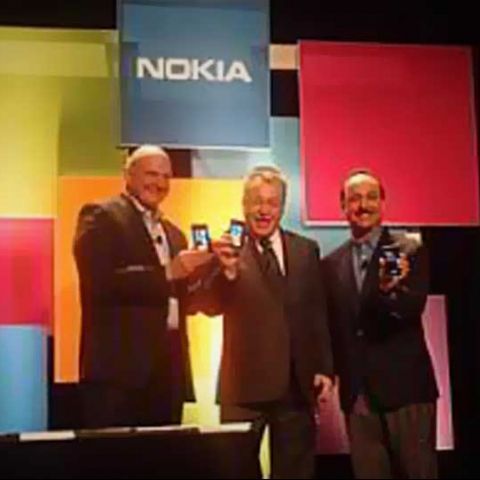 Nokia has launched the Lumia 900, a new Windows Phone 4G LTE device exclusively for AT&T. Looking like a mix between the N9 and Lumia 800, the the Nokia Lumia 900 packs pretty similar hardware to the Lumia 800, but has a larger 4.3-inch screen and an 1,830 mAh battery. The device, with its 4G LTE connectivity, is for now not expected to launched elsewhere in the world - we'll have to wait and see. The device comes pre-loaded with value added services like Nokia Drive, and special bundled apps.

"With Lumia, our interest has been to establish a series of beachheads in this war of ecosystems… There is much more we can do in this battle, especially here in North America," said Stephen Elop, Nokia's CEO, before introducing the Lumia 900.
The 900 is the third device in Nokia's Lumia portfolio, following the Lumia 800 overseas, and the recently released Lumia 710 for T-Mobile. Though the Lumia 710 was met with mostly lukewarm reviews, the Lumia 900 is more like a mix of the better-received Lumia 800 and the Nokia N9.
The Lumia 900 features a 4.3-inch, AMOLED Clear Black display, the largest screen on a Lumia device so far. It's powered by a 1.4GHz processor and features an 1830 mAh battery.
Nokia Senior Vice President Kevin Shields took special care to demonstrate the phone's cameras. The primary camera includes Nokia's exclusive Carl Zeiss optics, with large aperture (F2.2) and wide angle focal length (28mm) which should allow for high-quality, uncropped images even in low-light conditions. Additionally, the Lumia 900's front-facing camera boasts a large aperture and wide angle lens that should help capture sharp, bright images and high-quality video calling, right out of the box.
In addition to all of the usual Window Phone benefits, Nokia is working hard to ensure the Lumia 900 will offer users even more reasons to consider the device. To that end, there's Nokia Drive, which provides free, voice-guided, turn-by-turn navigation with a dedicated in-car user interface that essentially turns the Nokia Lumia 900 into a GPS navigation device.

Nokia is also working with developers to create exclusive apps for Lumia devices. The ESPN sports hub is pre-loaded on Nokia Lumia smartphones, and provides a one-stop sports application for news, videos and scores. Additionally, the CNN App for Windows Phones provides the latest news and video from CNN's reporting around the globe and direct access to iReport, CNN's participatory news community. Launching globally for free in the next month, the CNN App will be exclusive to Nokia users for 90 days.
In addition to ESPN and CNN, the Univision App will be exclusive to Nokia Lumia users in the U.S. and Puerto Rico for 18 months. Univision delivers unique and exclusive Spanish-language content, including entertainment, sports, news, cooking, and local content for different U.S. markets.
Additionally, a partnership with EA to bring over 20 of the world's most popular games to the Windows Phone marketplace, coming first to Nokia Lumia devices.
As for other, non-Nokia Windows Phone devices, Elop said that he is glad other manufacturers are still making Windows Phones, so that it will increase interest in the operating system and further stimulate the app ecosystem. But he believes it is important to make sure that the OS isn't modified to the point that it becomes fragmented.
The Lumia will be available in black and cyan. No pricing or availability details have been released yet, other than AT&T will offer the Lumia 900 "in the coming months." Check back with PCMag as soon as the Lumia 900 is released for a full review.