Celkon Mobiles has added another handset to its Campus-series with the budget Campus A15. The smartphone runs Android 4.2.2 Jelly Bean and is powered by a dual-core processor. The Celkon Campus A15 is available for Rs. 3,999.

The Celkon Campus A15 has s a 3.5-inch HVGA display with 320 x 480 pixels resolution. The device comes with 512 MB inbuilt storage, and supports additional storage up to 32GB via microSD card. It has a 3.2MP rear camera with digital zoom and video recording, but does not have a front camera.

The Celkon Campus A15 is a dual-SIM ( GSM GSM) smartphone and supports Bluetooth, Wi-Fi, GPRS, EDGE and Micro-USB connectivity. It comes with a 1400mAh battery. Celkon has pre-loaded interactive games and content of the smartphone. It also has an app called Zapya that allows users to share their content by shaking their phone.

Earlier this month, Celkon Mobiles has launched the RahmanIshq AR45 smartphone for music lovers priced at Rs. 7,999. It has a 4.5-inch FWVGA display with 480 x 854 pixels resolution. It has a 1.2GHz dual-core Cortex A7 MediaTek processor and runs Android 4.2.2 Jelly Bean. The smartphone offers dual-SIM with dual standby. The AR45 smartphone has a 5MP autofocus rear camera with LED flash and a VGA front-facing camera for video calling. It has 512MB of RAM and 4GB of inbuilt storage expandable up to 32GB via microSD card support. 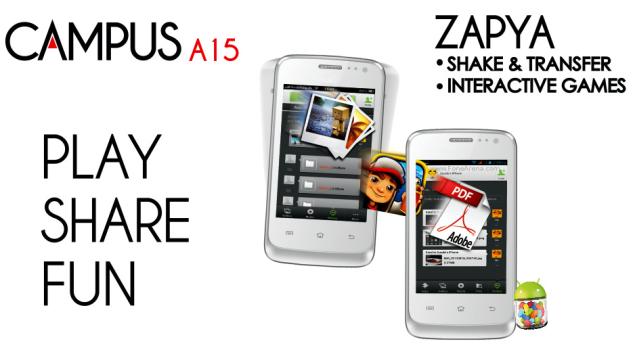