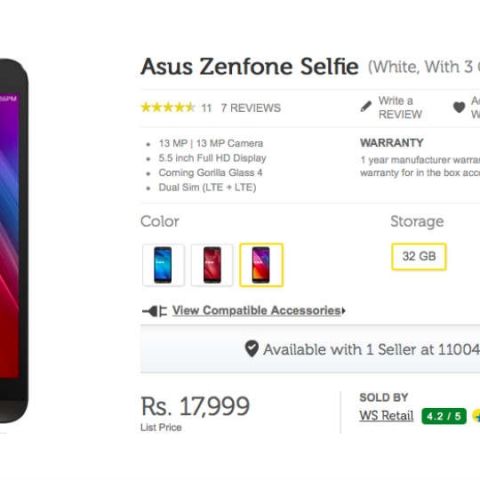 Yet another addition to the Asus Zenfone family is available online. The Asus Zenfone Selfie(₹ 10999 at Tatacliq) can be yours for Rs. 17,999. The device is available on Flipkart. Coming to the specifications of the smartphone, it has a 5.5-inch 1080p IPS display with Corning Gorilla Glass 4 protection. The smartphone has a Qualcomm Snapdragon 615 chipset (1.7GHz octa-core processor) coupled with 3GB RAM. It houses 32GB obuilt-in storage expandable up to 64GB via a MicroSD card. Staying true to its Selfie name, the camera houses a 13MP camera in the front as well as the back. A 3000mAh battery powers the entire package.

Asus has a large portfolio of smartphone under its Zenfone wing and if you are looking to pick up an Asus smartphone, you may want to do your homework before ordering the wrong model by accident. Asus is expected to launch about seven Zenfones in 2016. These launches include two different variants of the 'mainstream' Zenfone Laser, one Zenfone Selfie, one 'premium' Zenfone Deluxe, one Zenfone Max, and one or two more models of the Zenfone Go. All of these variants of the Zenfone family will be released in 2016, but specific launch times for each variant are unknown.