Apple's 2017 iPhone lineup including redesigned OLED iPhone and iterative iPhone 7s, iPhone 7s Plus is expected to launch at a special event in September. Apple iPhone 8 is expected to be priced around $1,200 for the base variant.

It seems like the Apple iPhone 8 is not delayed after all, and may be announced alongside iterative iPhone 7s and iPhone 7s Plus. In an investor note published yesterday, KGI Securities analyst Ming-Chi Kuo said that the iPhone 8 with the OLED display will be available in limited units at the time of launch and mass production will begin only during mid-September.

Further, a report from DigiTimes, which cites supply sources, claims that all three models have entered mass production. It adds that there will be no shortage or supply constraints for the iPhone 7s and the iPhone 7s Plus, but iPhone 8 could fall short of demand. 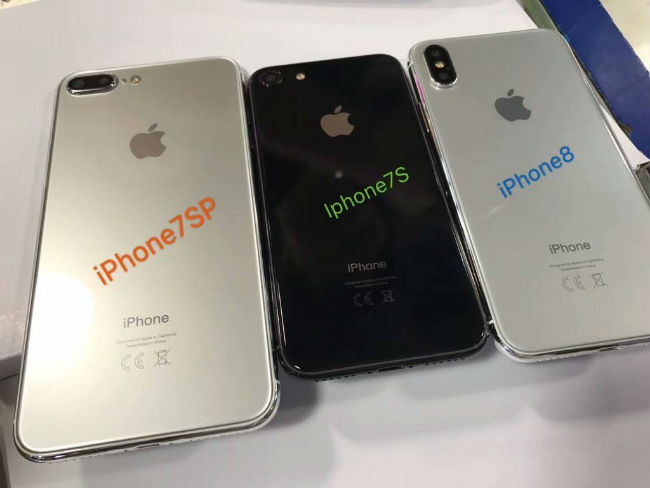 The report adds that strong demand for the 2017 iPhone will keep Apple suppliers busy during the second half of this year and most of them are expected to announce growth in sales volume during this period. "The iPhone assemblers Foxconn Electronics, Pegatron Technology and Wistron will see their revenues hit highs during the September-November period," sources told DigiTimes.

Ahead of launch, the dummy models of 2017 iPhone family have been pictured, and corroborate some of the previous details. All the three models are expected to switch to a glass back in order to add support for wireless charging. Apple iPhone 7s and iPhone 7s Plus are expected to support a front mounted Touch ID sensor and sport a design similar to its predecessor.  The OLED iPhone is expected to offer a radical redesign with near bezel-less display and glass back with stainless steel casing. The handset might ditch the Touch ID fingerprint sensor altogether and incorporate biometric authentication using 3D facial recognition and iris scanning.

What @jsnell talked about on the last @_upgradefm is true: the iPhone will suppress notification sounds if you're looking at it pic.twitter.com/eFzKUfZYDx

Apple's forthcoming HomePod has already revealed a lot of information around company's 2017 product lineup. The firmware gave an early look at the render of the bezel-less iPhone and reference to new features like 4K video recording at 60fps and SmartCam that detects scenes such as fireworks or sunrise and automatically selects the best camera setting. Kuo predicts that iPhone 8 will sport a front facing 3D sensor for 3D facial recognition and developer Guilherme Rambo has found references to 'TLAttentionAwarenessObserver' class in HomePod's firmware that could suppress notification sound when the user is looking at it. There is a fair possibility that Apple may not enable the feature at the time of launch and push it with future updates.

Apple's 2017 iPhone lineup comprising of the iterative iPhone 7s, iPhone 7s Plus and the redesigned OLED iPhone could be announced at a special event in September. Most analysts believe this could be the biggest iPhone launch since Apple debuted the iPhone 6 Plus with a 5.5-inch display in 2014.