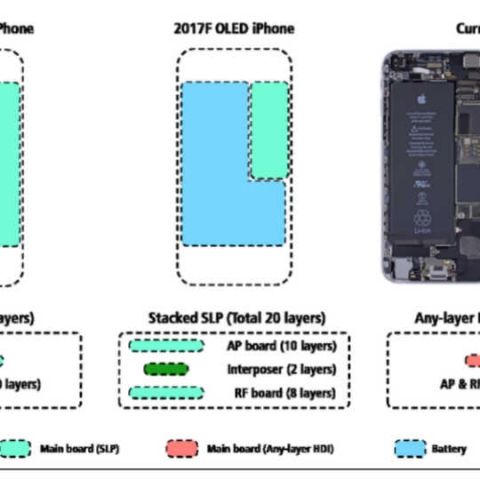 Apple's OLED iPhone 8 will have dimensions like the iPhone 7, but with a larger battery pack. According to KGI Securities' Ming-Chi Kuo, the iPhone 8 will sport a 5.5-inch display and 2700mAh battery. 9to5Mac notes that the handset will have narrow bezels allowing for a larger battery and smaller dimensions. In comparison, Apple's 4.7-inch iPhone 7 comes with a 1960mAh battery. To pack a bigger battery, KGI says Apple will adopt a stacked "substrate-like" PCB mainboard for its OLED iPhone. Kuo has shared an image, which shows the new PCB design.

Apple is reportedly working on three new iPhone models for 2017. Two of these will be direct successors to the iPhone 7 and 7 Plus, while the third one will feature an OLED display. Apple has apparently ordered 60 million OLED panels from Samsung for the next-gen device. The stacked mainboard design will reportedly result in 80 percent increase in manufacturing cost. Earlier rumours pegged the iPhone 8 to cost to upwards of $1000 at the time of launch.

KGI also notes that the iterative iPhone 7s and 7s Plus will continue to use LCD displays and the same motherboard design as their predecessors. Their dimensions and battery capacity are also expected to be similar to that of the iPhone 7 and 7 Plus. The Apple iPhone 8 is one of the most anticipated smartphones of 2017. With iPhone sales declining in China and other regions, the new iPhone is expected to reinvigorate demand.