The iPad 2 has been rumoured for quite a while, and various facts about it have ostensibly been gleaned from cases, covers, and images. For all this, there has been no official confirmation from Apple if the iPad 2 even exists. In the meanwhile, rumours o 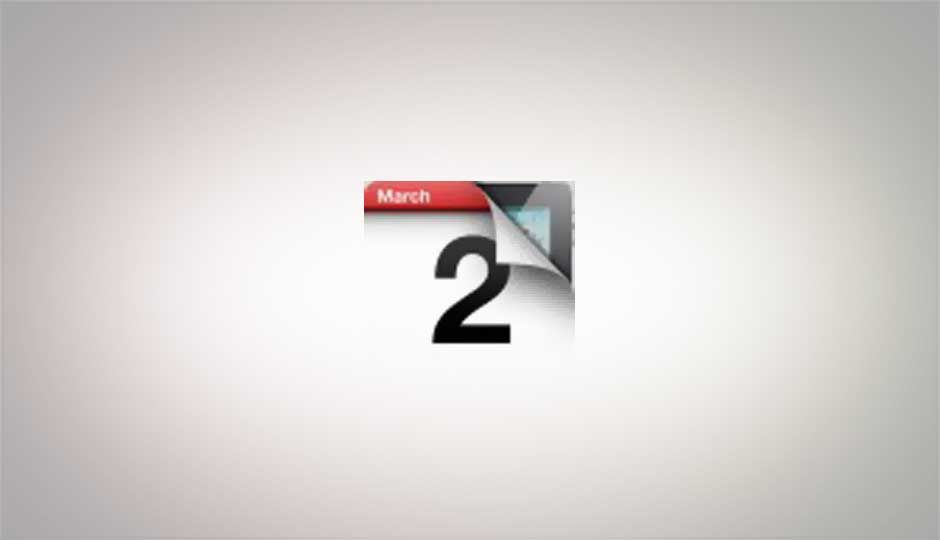 The iPad 2 has been rumoured for quite a while, and various facts about it have ostensibly been gleaned from cases, covers, and images. For all this, there has been no official confirmation from Apple if the iPad 2 even exists. In the meanwhile, rumours of a Samsung Galaxy Tab III are circulating, with numerous reports indicating a 8.9-inch form factor, positioning the tablet exactly in between the Tab and Tab II. It is expected in the first half of the year. 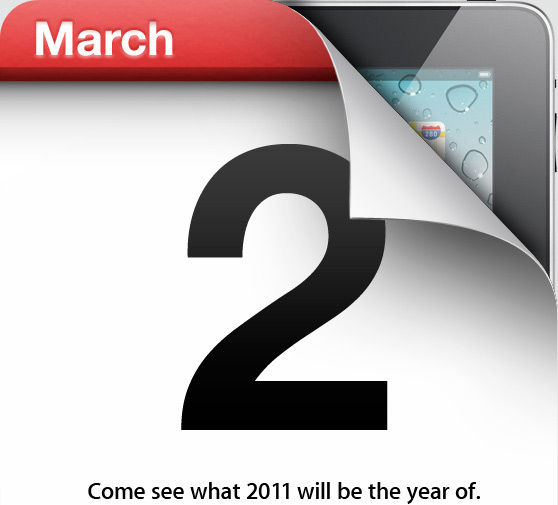 Now, Apple has sent out invites (seen above) for a March 2nd event, and it certainly looks like it has something do with a product launch, and the number 2 – a not so subtle confirmation. The original iPad launched at around the same time last year! Let us take a look at all the rumours that have gone past, and try to get a picture of what the world might be getting once the iPad 2 is official.

New display, possible Retina – Though some reports are adamant the iPad 2 will not have a new display, even fewer are sticking by their predictions that it would be Retina Display. At the very least, we can expect an increase in resolution.

iPad 3 to follow soon after – Daring Fireball’s John Gruber is normally quite spot on with his Apple predictions, making the incredible fact that Apple will supposedly release a newer version of the iPad just a few months after the iPad 2 much harder to not swallow. However, the new device might just be an upgraded 10-inch tablet, replacing the original and following the smaller 7-inch iPad 2.

Smaller, thinner form-factor – One of the biggest misgivings consumers have had about the iPad is its not inconsiderable 9.7-inch size, large enough to be cumbersome and not exactly portable. With smaller form-factors also enjoying a decent amount of success in the market, it seems probable that Apple would experiment with a smaller, thinner and lighter, possibly with a 7-inch screen – even though this is against Steve Jobs’ earlier displayed contempt for small screens.

Dual-core processor, integrated GPU – The iPad 2 will have to keep up with such multi-core SoC behemoths as the TI OMAP 5, Qualcomm Snapdragon AP06Q0, Nvidia Tegra 2 and Tegra 3, Samsung Exynos, etc., if it intends to survive in 2011-2012. It would be criminal for them not to upgrade the processor and RAM of the unit, and a dual core 1.2GHz processor with a 2-core SGX453 GPU is expected to be onboard. It would definitely also get at least 512MB of RAM, if not 1GB.

New integrated speakers – It looks like the USB or mini DisplayPort rumours prompted by the port-holes in iPad 2 cases might be wrong, and the slot is now believed to be aroud the new and improved integrated speaker of the iPad 2.

More storage capacity – Some rumours are also pointing to Apple considering launching models with more than just 64GB onboard, a 128GB model is expected. Other reports say the 16GB version will be dropped altogether.

World-mode connectivity – Now that Apple is officially shipping CDMA iPhones, the obvious advantages of dual-mode GSM and CDMA connectivity for the iPad 2 cannot be overlooked. The advantage won’t just be for users, but also from a manufacturing standpoint, where making a world-mode tablet instead of two separate GSM and CDMA units will be easier.

[RELATED_ARTICLE]Front facing camera, maybe back-facing as well – The iPad 2 will almost definitely feature a front camera as well as support for FaceTime, something that the iPad is obviously lacking – and all other tablets are offering. The back-camera looks quite probable as well, again placing it on a level playing field with the other competition – and makes more sense on a smaller form factor.

New interface  – With all the money Apple has been investing in gesture controls, along with numerous filed patents, it looks possible – though not very likely – that the iPad 2 will feature not just the classic Apple one-button approach, but more.