Windows 8 Explorer gets the Ribbon treatment

As we approach the Microsoft BUILD conference next month, Microsoft continues to uncover details about Windows 8, the company's most significant desktop operating system in over a decade, according to the project's leader, Steven Sinofsky. 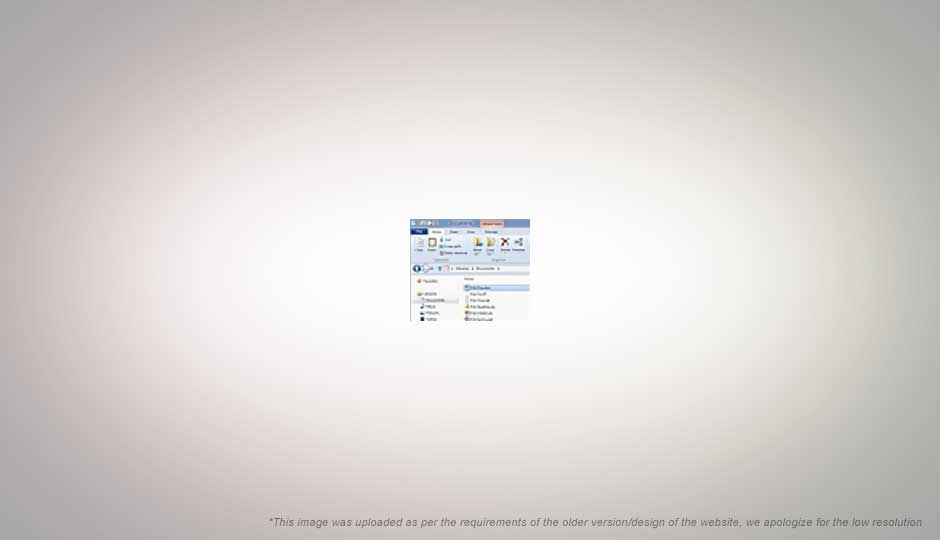 Windows 8 Explorer gets the Ribbon treatment

As we approach the Microsoft BUILD conference next month, Microsoft continues to uncover details about Windows 8, the company's most significant desktop operating system in over a decade, according to the project's leader, Steven Sinofsky.

Today on the Building Windows 8 blog, a post by Alex Simons of the Windows program management team describes how the Windows Explorer file manager window would look. As earlier rumors speculated, it will indeed include the Office-like "ribbon" toolbar. The measured release of Windows 8 details stands in sharp contrast to the jolt with which the OS was first demoed simultaneously at two conferences last spring.

As Sinofsky puts in in a preamble to the post, "Windows 8 is about reimagining Windows, so we took on the challenge to improve the most widely used desktop tool (except maybe for Solitaire) in Windows." The ribbon displays icons for commonly used functions. In the case of the Explorer, this means things like Copy, Paste, Delete, Rename, Cut, and Properties.

Addressing power users who have been known to replace the built-in Windows Explorer with third-party tools such as FastCopy and xplorer2, Simons writes, "Our goal is to improve the usage experience for a majority of customers while recognizing that, with such a long history and variety of depth usage, we cannot possibly provide all of the power everyone might want.

Simons's team used telemetry, or anonymous opt-in data sent remotely from hundreds of millions of Windows user sessions to Microsoft, to determine which Explorer features were most heavily used. By far the most frequently used command was Paste, followed by Properties, Copy, Delete, Rename, Refresh, and Cut. The data showed that the top ten commands out of over 200 in total accounted for 81 percent of all use. But people also use the file system for things like playing music or video, starting emails, and edit document.

The data also showed that most commands by far were invoked through the right-click context menus (54.5 percent), followed by keyboard shortcuts (32.2 percent). Only 10.9 percent of commands issued came from the command bar, and only two of the top ten most used commands were even available in the command bar. Microsoft clearly wants to improve on with the addition of the ribbon.

Simons' team looked at user feedback, which pointed to reinstating some features removed from Windows XP and implementing some of what third-party file management tools do. The team came up with three overriding goals, which the post explains as follows:

"1. Optimize Explorer for file management tasks. Return Explorer to its roots as an efficient file manager and expose some hidden gems, those file management commands already in Explorer that many customers might not even know exist.
2. Create a streamlined command experience. Put the most used commands in the most prominent parts of the UI so they are easy to find, in places that make sense and are reliable. Organize the commands in predictable places and logical groupings according to context, and present relevant information right where you need it.
3. Respect Explorer's heritage. Maintain the power and richness of Explorer and bring back the most relevant and requested features from the Windows XP era when the current architecture and security model of Windows permits."

The Reappearance of the Ribbon
After evaluating a few other directions, Simons's team setted on the ribbon as the best way to meet all of these goals, and notes that it will be familiar to current users of Office and some built-in Windows 7 apps like Paint and Windows Live apps. He explains the choice as follows: "The ribbon would allow us to create an optimized file manager where commands would have reliable, logical locations in a streamlined experience. The flexibility of the ribbon with many icon options, tabs, flexible layout and groupings also ensured that we could respect Explorer's heritage." The ribbon is also well-suited to a touch-based interface, which Windows 8 has aspirations to become.

Tabbed Interface
The Windows 8 ribbon has four tabs, Home, Share, View, and Manage, with the first expected to be by far the most frequently used. Home will house the commands used 84 percent of the time--Copy, Paste, Delete, Rename, Cut, and Properties. Share will allow zipping, emailing, or burning files to disk. View will handle things like turning on and off the preview pane, navigation pane, sort order, and details.

Search is also improved in the Windows 8 Explorer: You'll be able to filter by date ranges, file type, file size, and other properties such as author or name. And you'll be able to save searches for future use.

Simons rounds off the long blog post noting that the new interface works better with widescreen formats, and that despite the ribbon's apparent targeting of novice users, there will be features that appeal to power users, as well, such as more keyboard shortcuts and more customization potential. And for those who miss XP, the Windows 8 Explorer brings back that older OS's Up button, to take them back to an earlier folder.

In all, the changes point to both a radical new interface and to one that looks towards the past in some ways. To see the new interface in action, check out the video below, and for more detail, read the Building WIndows 8 blog post. To read about other new known features in Windows 8, check out Windows 8: What We Know So Far.