Toshiba has introduced a new range of designs and styles in its 2013 range of laptops starting from Rs 24,000. 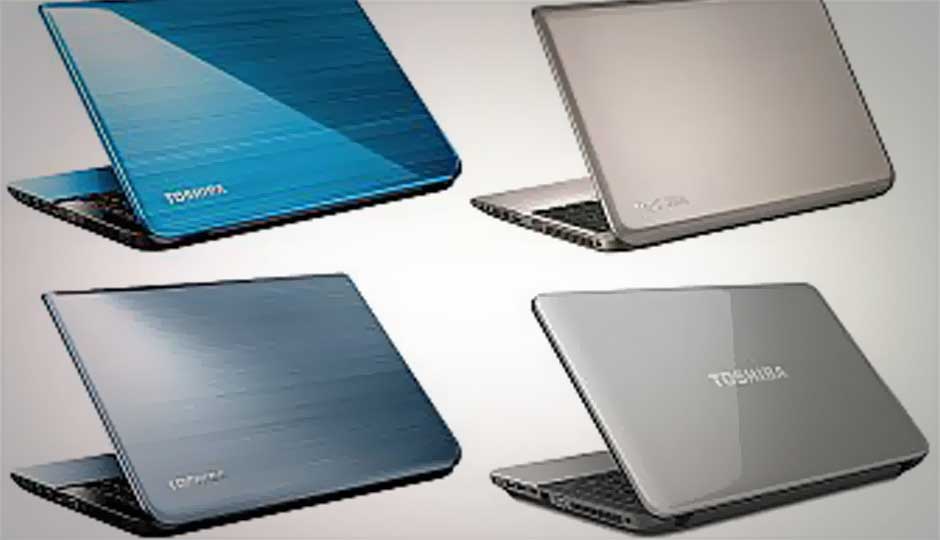 Toshiba has launched four new series of laptops in India with specific characteristics in each consumer segment. The laptops targets office goers, youth as well as rugged or users with active lifestyle. Each range comes in a variety of screen sizes, colors and for the first time Toshiba has introduced touchscreens in its Satellite C Series.

The Toshiba Satellite P Series laptops have a silver finish and are just 24mm thin. The Satellite P50 have a 15.6 inch HD clear SuperView LED backlit display with 16:9 aspect ratio. Users can choose between Intel Core i3-3227U 1.9GHz Processor with 3MB Cache and Intel Core i5-3337U processor (1.8GHz with Turbo Boost technology up to 2.7GHz (3MB Cache). The P50 series of laptops are available for Rs 39,831 and Rs 47,117 respectively.

The Satellite P50 comes with 4GB DDR3 RAM expandable up to 16GB, with a 750GB SATA HDD and 3D Motion Sensor protection. It offers a host of connectivity options like 2 x USB 3.0, 2 x USB2.0 and HDMI port. The laptops come with Harman Kardon speakers embedded in a dedicated metal-mesh speaker grill above the frameless tile keyboard along with built-in 8X DVD super multi drive.

The Satellite S Series have a brushed metallic ice silver finish and has a thin 24mm body. The laptop has a 15.6 inch HD clear SuperView LED backlit display with 16:9 aspect ratio and is powered by Intel Core i5-3337U processor (1.8 GHz with Turbo Boost up to 2.7 GHz, 3MB Cache) and Integrated Intel HD Graphics.

The laptops have 4GB of DDR3 RAM expandable up to 16GB, a 750GB SATA HDD, built in 8X DVD optical drive, DTS Sound and built-in Onkyo speakers. The L Series laptops have a slim profile at 24 mm and weigh less than 2kgs.

The C Series includes an optional touch screen with 10-finger support, anti-finger print coating and is available in a choice of colors like premium glossy black, luxury white pearl or shining silver.

It has a 15.6-inch screen size, with a tile keyboard and a multi-touch touchpad. The Satellite C is a part of the budget range of laptops by Toshiba starting from Rs 24,000 in India.

The new range of Toshiba laptops come with a 1-year onsite warranty and a 1-year carry-in international limited warranty.