The Yoga 900 has a 13.3-inch QHD display and is 0.59-inches thick. As for the Tab 3 Pro, it is powered by the new Intel Atom processor. The Yoga Tab 3 Pro also features a rotatable projector 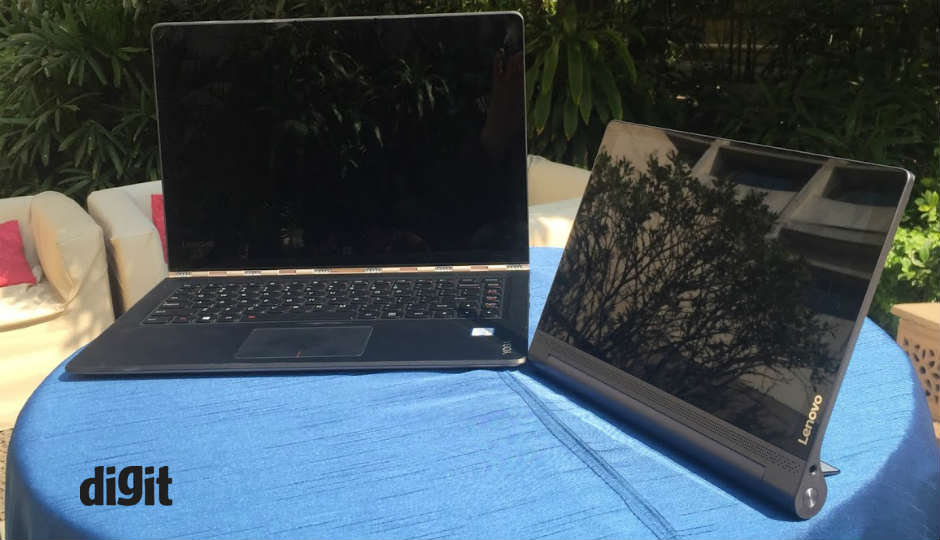 The Yoga 900 priced at Rs. 1,22,000 is the flagship ultrabook in the Yoga series this year. The laptop has magnesium alloy panels and a faux leather plastic keyboard deck and palm rest. The display is a 13.3-inch one, offering a 3200x1800 QHD+ resolution. Lenovo has used an IPS panel on the Yoga 900. Inside, the top of the line variant features an Intel Core i7 processor which is a big update over the Core M processor that powered the Yoga 3 Pro. It comes with up to 8GB RAM and 512GB of storage. Lenovo will also sell the laptop with an Intel Core i5 processor, but that variant has yet not been announced for India. Graphics are handled by the integrated Intel HD graphics. Lenovo has partnered with JBL for the built-in speakers on the laptop. Lenovo claims that under ideal conditions, the laptop can last upto 9 hours on a single charge. Going over the ports, the Yoga 900 has 2 x USB 3.0, 1 x USB Type C 3.0 with video-out, 1 x DC in which can also be used as a USB 2.0, 4-in-1 card reader (SD, MMC, SDXC, SDHC), and a audio combo jack. The laptop comes with Windows 10 pre-installed.

The other device launched today is the Yoga Tab 3 Pro. This is a big tablet with a 10.1-inch display, and offers a 2560x1600p resolution. It houses an IPS panel and supports 10-point multitouch. While the frame of the tablet is metal, it does get a plastic faux leather back. The new tablet is powered by an Intel Atom x 5-Z8500 processor. This is a quad-core processor with its processing cores running at 2.24GHz. The Yoga Tab 3 Pro has 2GB RAM and 32GB of storage which can be further expanded via a microSD card to 128GB. There are two cameras on-board. There is a 13MP camera at the back of the tablet and a 5MP one at the front. The tablet houses a 10,200mAh battery and the company claims 18 hours of usage time. However, the most important feature of the tablet is the integrated rotatable projector. It uses a 50 lumen lamp and can project image of upto 70-inches on any white wall. The tablet also features four front-facing JBL speakers equipped with Dolby Atmos.