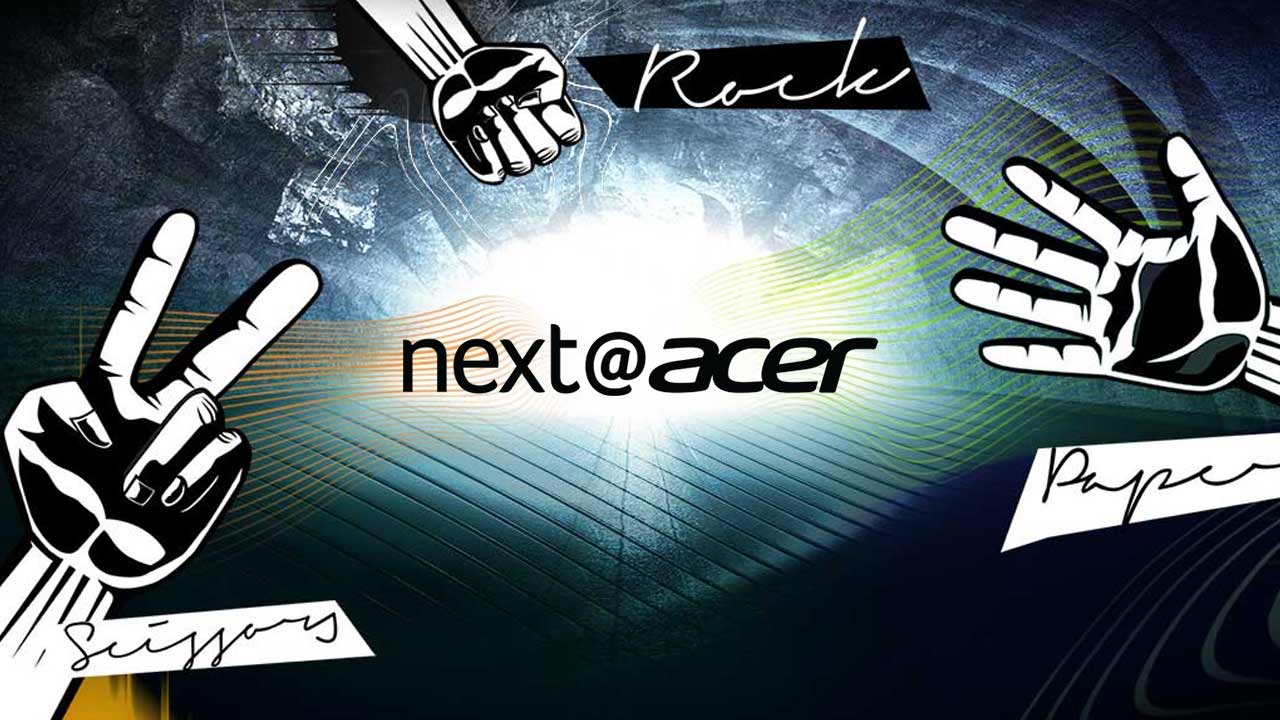 Next@Acer 2020, Acer’s global press event was held in a virtual format and saw announcements and refreshes across all their gaming, business, enterprise and creator portfolios. Key announcements included a new sub-brand, Acer Enduro, new ConceptD desktops, monitors and notebooks as well as slim laptops in the form of the Acer Swift 5 which will feature the yet to be launched Intel Tiger Lake processors and Intel Xe integrated graphics. Here are the announcements in detail. 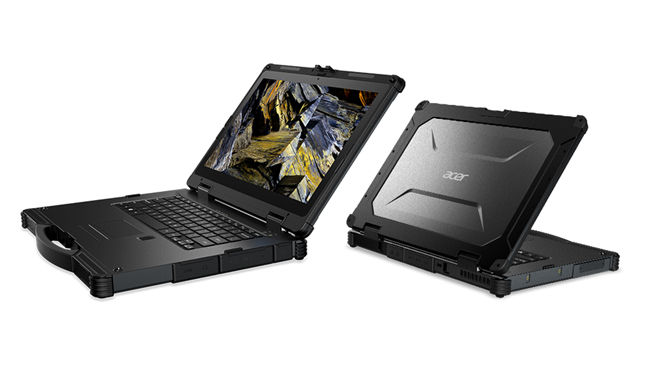 Acer’s premium gaming lineup, Predator, will see new desktops, monitors and accessories. The attention grabbing announcement was of the Predator X25 gaming monitor which sports a 360 Hz refresh rate display. Also announced was the Predator XB3 gaming monitor which has NVIDIA G-Sync compatibility, DisplayHDR 400 and features a low 0.5 ms (Grey-to-Grey) response time. On the desktop side of things, Acer announced upgrades to the Orion 9000 which will now have Intel Core i9 Extreme processors and dual NVIDIA GeForce RTX 2080 Ti graphics cards in the flagship model. A mid-tower companion to the Orion 9000 is the Orion 3000 which will be powered by 10th Gen Intel Core i7 processor and GeForce RTX 2070 SUPER graphics cards. Other launches include the Nitro 50 gaming desktop, Predator Cestus 350 gaming mouse and a Predator gaming chair in collaboration with OSIM. 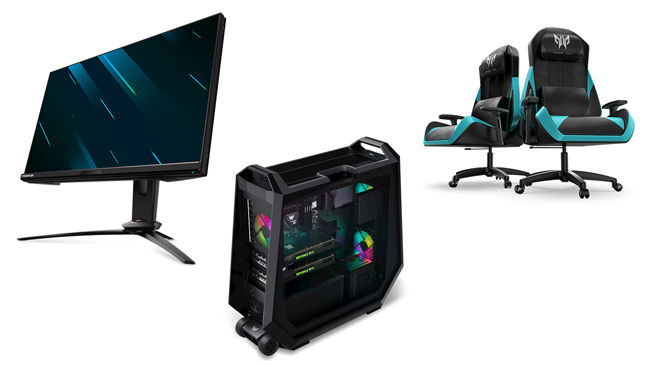 The Acer Predator Helios, Nitro and Triton series of laptops also received a notable refresh. The latest entrant happens to be the Acer Predator Helios 700 notebook lineup which will be powered with an Intel Core i9-10980HK or i7-10875H processor along with NVIDIA GeForce RTX 2080 SUPER or 2070 SUPER graphics cards. Other features include mechanical switches for some keys on the keyboard, Killer DoubleShot Pro Ethernet and RAID 0 storage configurations. The Helios 300 notebooks which are some of the more popular gaming laptops also received notable upgrades. 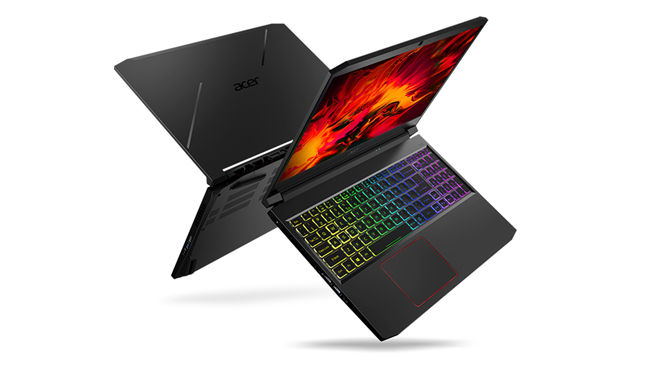 Acer’s slim gaming laptop range, Triton 300, will now sport 240 Hz displays, 10th Gen Intel Core processors, up to NVIDIA RTX 2070 MAX-Q graphics card and more storage slots. All of this without compromising on the slimness with the slimmest of the lot being 19.9mm thick.

ConceptD is a relatively new brand from Acer aimed at media professionals a.k.a. Creators. This would be the first refresh for the ConceptD lineup and saw the addition of new notebooks, desktops and monitors. Acer has wholly adopted the easel-like hinge and we saw the same in the form of the ConceptD 3 Ezel and notebooks. The ConceptD 3 Ezel is a convertible notebook which features an all-metal chassis and a large glass trackpad. The Ezel hinge reportedly allows users to orient the ConceptD 3 Ezel in six different form factors. Aside from the Ezel lineup, the ConceptD 3 series of notebooks also received new upgrades in the form of better GPUs and CPUs. 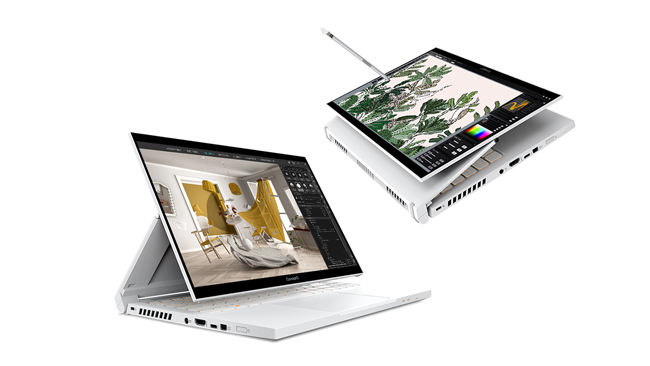 Next up was the ConceptD 100 desktop which will be powered by 9th Gen Intel Core processors and NVIDIA GeForce or Quadro GPUs. These desktops come in compact form factors with a minimal aesthetic similar to what we’ve seen with the ConceptD lineup so far. 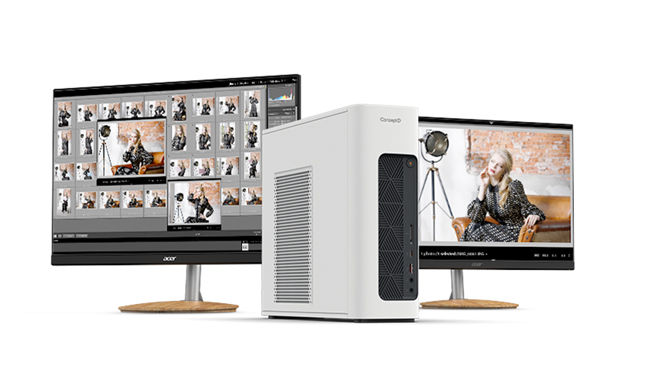 In terms of peripherals, Acer announced the ConceptD CP5, CP3 and CM3 monitors. The top of the line CP5271UV is a WQHD monitor with DisplayHDR 600, Adaptive-Sync and has a Delta E which is less than 1 making it very colour accurate. The CP3 series has 98% DCI-P3 monitors with up to WQHD 3840x2160 resolution as well as DisplayHDR 400. All display products including the panels used in the notebooks are PANTONE-validated.

New in the Acer line of Chromebooks is the Spin 713 which is a convertible chromebook based on Project Athena. Project Athena is a set of specifications from Intel aimed at increasing the battery life of slim notebooks. The Chromebook 713 will be powered by the latest 10th Gen Intel Core processor and will feature a 13.5-inch VertiView display that has an aspect ratio of 3:2. The touchscreen and touchpad will be protected by Corning Gorilla Glass that’s coated with an antimicrobial agent. Moreover, the Spin 713 will also adhere to MIL-STD 810G which means it would be capable of resisting dents and corrosion. 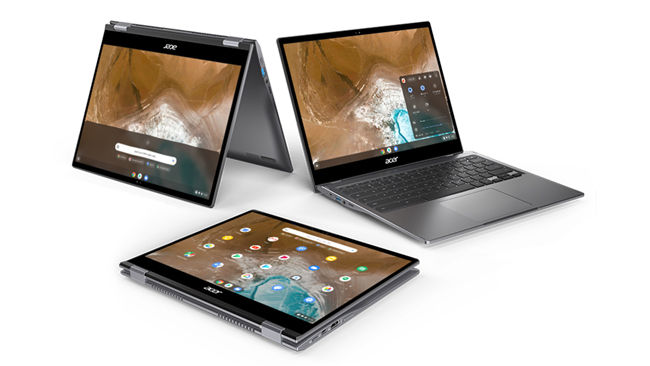 Also announced was the Acer Chromebook Spin 311 which is a 11.6-inch convertible Chromebook powered by a Mediatek MT8183. The Spin 311 will also have an Antimicrobial Corning Gorilla Glass HD touch IPS display.

Acer’s ultrathin Swift 5 also received some noticeable upgrades. The upcoming Acer Swift 5 will be powered by Intel’s Tiger Lake processor and include Intel Xe integrated graphics or NVIDIA GeForce MX350 discrete graphics. As with the Chromebooks, even the Swift 5 lineup with touchscreens will have Antimicrobial Corning Gorilla Glass for added protection. 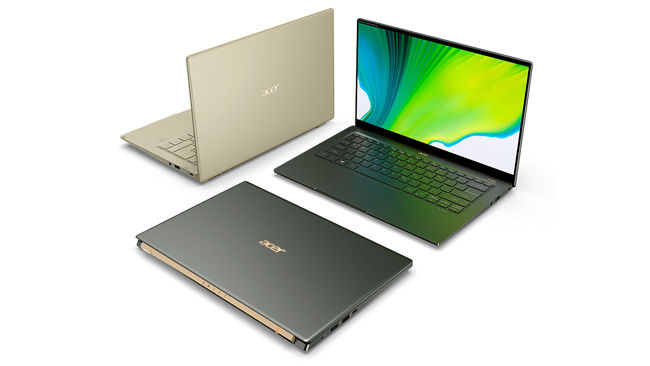 “The new Swift 5 pushes the envelope on what thin-and-light notebooks can be,” said James Lin, General Manager, Notebooks, IT Products Business, Acer Inc. “A productivity powerhouse housed in a sleek and ultraportable chassis, the Swift 5 is an excellent option for professionals who are always on the move and seeking a device capable of keeping up with them.”