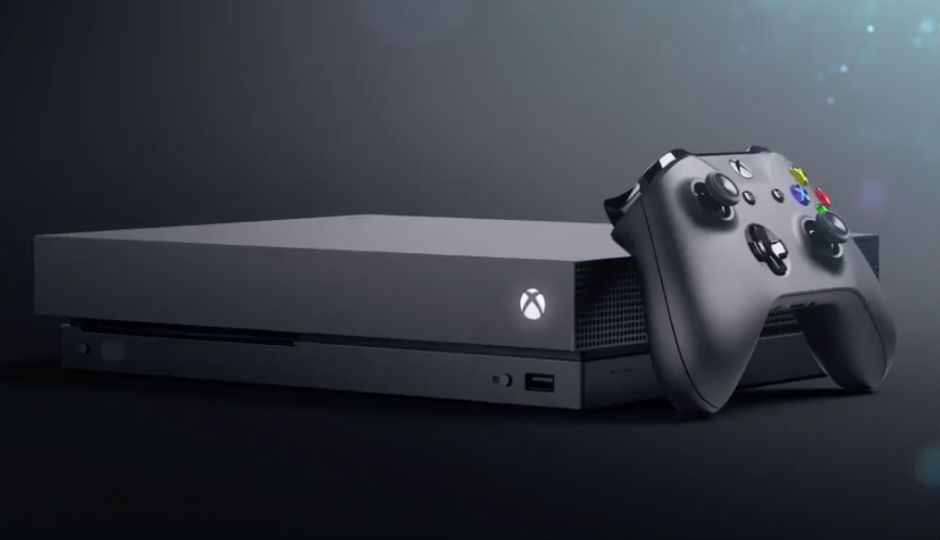 At E3 2017, Microsoft finally lifted the veil off its new console. Codenamed Project Scorpio for a year, Microsoft has announced that the new console will be called the Xbox One X, and will be priced at $499 (Rs. 32,000 approx. directly converted). The console will be available in the US starting November 7. All existing Xbox One accessories will work with the new Xbox One X. The Xbox One X will also support Microsoft's backwards compatibility initiative (the ability to play Xbox 360 games on your Xbox One). However, there is no information on pricing and a launch date for India just yet. As you can see from the image above, the Xbox One X looks a lot like the Xbox One S.

The new console boasts of 6 teraflops of graphical power. To put this into perspective, the PS4 Pro boasts of 4.2 teraflops of graphical power. To achieve these powerful graphical abilities, Microsoft is using a custom GPU engine that runs at 1172 MHz on the Xbox One X. The console will ship with an Ultra HD Blu-ray drive (something the PS4 Pro lacks) for 4K movies, and a 1TB HDD. You can check out our breakdown of the Xbox One X’s specifications here.

Microsoft previously promised that 900p and 1080p Xbox One games should be able to run at native 4K on the Xbox One X. How this is achieved without a patch is yet to be experienced. Existing Xbox One and 360 games will see a noticeable performance boost. We think this will work in the same way that the Boost mode runs on the PS4 Pro, but then again, we will comment on this once we’ve seen the Xbox One X in action. A noteworthy thing is that the Xbox One X features liquid-cooled vapor-chamber cooling inside, a technology that's seen on high-end PC gaming graphics cards. Because of this, the Xbox One X is a bit smaller and sleeker than its predecessor, the Xbox One S. At E3, Microsoft said that the new Xbox One X is the "smallest Xbox ever". The new console is 5 mm (0.2 inches) thinner than the Xbox One S; It is 60 mm (2.36 inches) thick compared to 65mm (2.56 inches).

As of now, the Xbox One X, will be available in black colour only, but we do think more colours and limited editions of the console will make their way to store shelves in 2018. When it comes to the connectivity options, the Xbox One X is identical to the Xbox One S. At the E3 2017 briefing, Microsoft showed-off 42 games, 22 of which where Xbox exclusives. Halo 6 was absent from the exclusive lineup.

What’s surprising is that Microsoft stayed clear of talking about VR at E3. We expected the company to talk about Mixed Reality and VR experiences, something that was highlighted at Microsoft Build 2017. At the launch of the console, we got to see a bunch of new first and third party games in action, including Assassin's Creed Origins, Metro Exodus, Ori and the Will of the Wisps, Forza, Ashen and many more.

How the Xbox One X compares to the PS4 Pro is something we will know when the console launches in November. The PS4 Pro has had a year's head start over the Xbox One X. It is also priced $100 cheaper than the Xbox One X, and is officially available in India. Sony has gone on to say that one in five PS4’s sold is a PS4 Pro. A significant number of PS4 Pro’s sold is PS4 players upgrading to the new console. Sony could announce a price drop on the PS4 Pro to make it a more lucrative offering for 4K gamers. However, this time around, the Xbox One X has raw power on its side. Sure, PS4 Pro games look great rendering at 1440p and checkerboarding it to 4K, but it still isn't native 4K, something the Xbox One X promises.

Sony may not have a 6 teraflop console but it does have one advantage - a slew of triple A first party games including God of War, The Last of Us 2 and Uncharted: The Lost Legacy to name a few. Sony has openly acknowledged that backward compatibility is not something they are looking at, whereas Microsoft has announced that the original first gen Xbox games will be coming to the Xbox One family via backward compatibility later this year.

You can watch Microsoft's entire E3 2017 briefing in the video below.