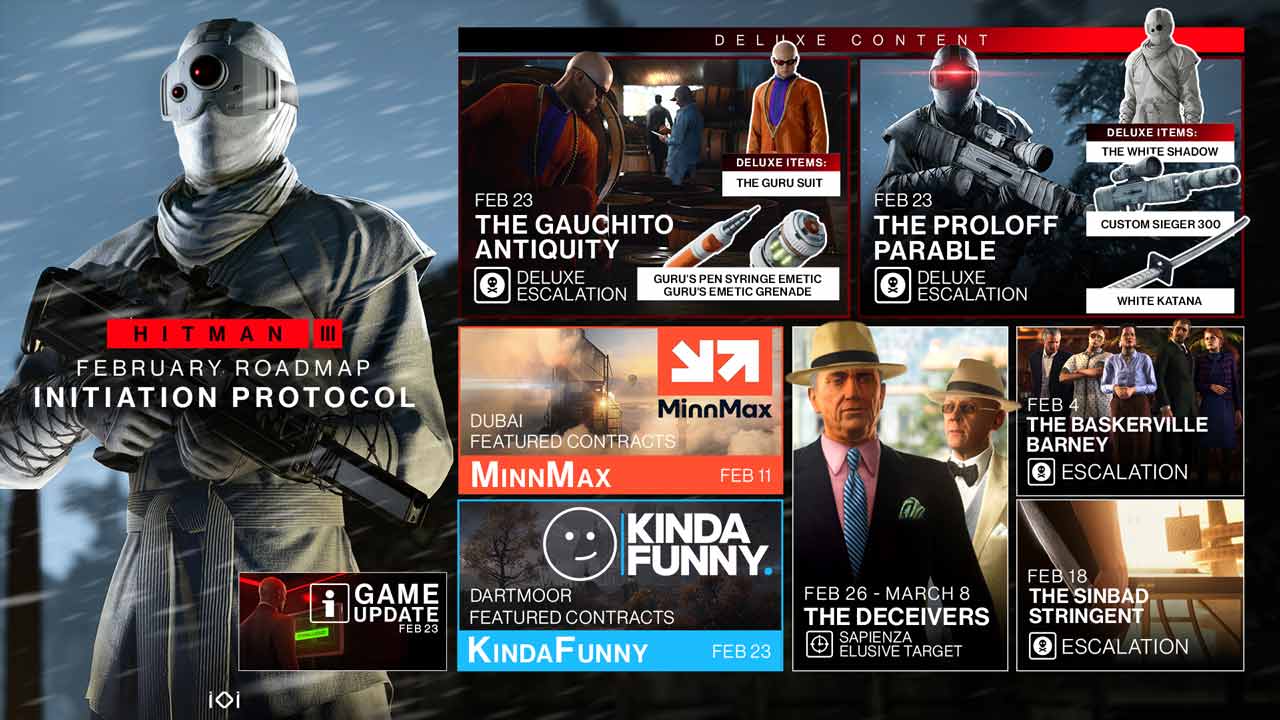 IO Interactive has stated that it will be adding new, free, weekly post-launch content to Hitman 3, for the entire month of February. This includes all-new outfits, creative contracts, fun objectives, and introduces the first set of Elusive Targets to the final chapter of the World of Assassination trilogy.

This month looks busy as hell for the company, as the tightly-packed roadmap reveals the first Escalation Contract to take effect starting 4 February. Set within the confines of the Thornbridge Manor, “The Baskerville Barney” mission tasks assassins around the world to exterminate the entire Carlisle family, only through a series of “accidents”. There are no saves in this mission. So, you better be on your toes for any unwanted mishaps.

In a surprising collaboration with the YouTube show, MinnMax, 11 February will take us all the way to Dubai, in an oddly fashioned contract that deals with a banana or two.

Armed with nothing but an arsenal of throwing knives, the Sinbad Stringent mission pits players against a series of crosshair-marked dangling boxes. There is no word on what these boxes contain.

Round two of Featured Contracts brings us back to Dartmoor, so we can test our skills in a custom session filled with pure mayhem, created by Kinda Funny.

The limited-time Elusive Targets also make a comeback. And this time, we are back in the streets of Sapienza, as we take on a pair of constantly roaming targets known as The Deceivers. You will need to eliminate them both to call your mission a success! 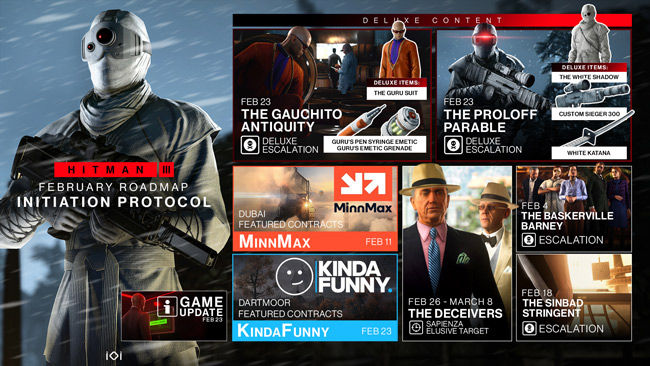 Players who own the Hitman 3 Deluxe Edition are in for a massive treat, as they will be getting two awesome Deluxe Escalation Contracts towards the end of the month.

In The Proloff Parable, players will be cast as The White Shadow to eliminate a series of targets aboard a fast-moving passenger train, steaming through the snowy Carpathian Mountains. For this, you get a new stealth ninja outfit, a white Katana, and a custom Sieger 300 sniper rifle.

On the very same day, we have The Gauchito Antiquity where players will be dressed as The Guru, a tech-savvy poisoner who has some emetic tools up his sleeve. Your task here is to poison and eliminate your targets while they are under the influence. This could be done by either drowning them inside a toilet bowl or by taking advantage of their temporary tunnel vision. As part of this contract, you get a Guru outfit, a pen syringe emetic, and a barf grenade.

That sums up everything we have for this month in Hitman 3. And as with the previous iterations, there is more to come in the near future. In addition to all the fresh content, IO Interactive is also planning on releasing a special game update on 23 February, which should include bug fixes and a few performance tweaks here and there.

Back in November, we had reported on a new title that IO Interactive was working on - Project 007 (early development). As the name suggests, the game will be based on the iconic, old-school, British Secret Agent - James Bond, and will follow the very first origin story for the titular intelligence officer, as players try to earn their 00 status. You can read more on that here.