The Galaxy Watch Active loses the rotating bezel but features a new design. The Galaxy Fit wearables are lightweight fitness trackers weighing in at 23g and are said to deliver a week of usage when fully charged. 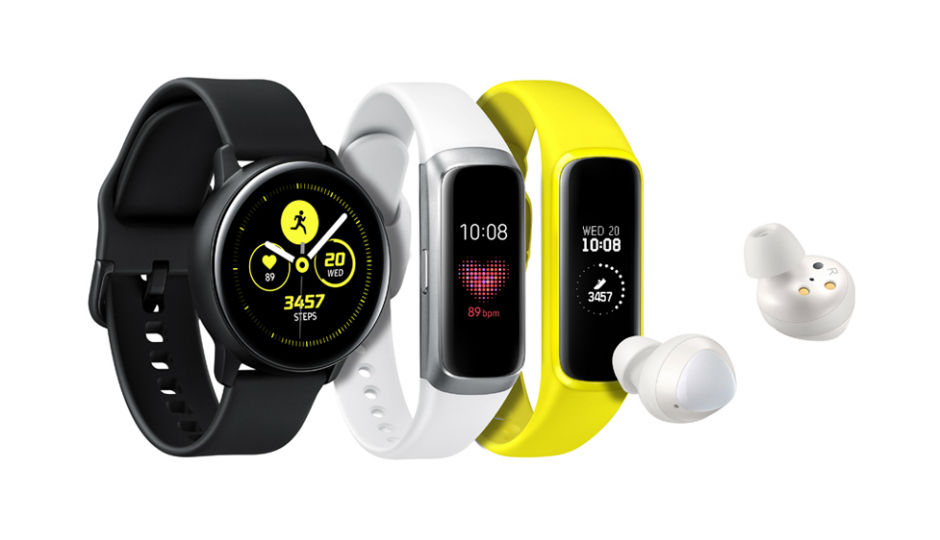 After announcing its Galaxy S10 lineup of smartphones, Samsung went ahead to unveil new Galaxy-branded wearables and a wireless earphone. The company has unveiled its Galaxy Watch Active smartwatch, the Galaxy Fit and Fit e fitness bands, along with the truly wireless Galaxy Buds earphone. While the Galaxy S10 series lineup was extensively leaked ahead of the official launch, most information on the above-mentioned devices managed to remain concealed, except some renders that tipped at their designs. The Galaxy Watch Active is the company’s high-end wearable with most features, followed by the Galaxy Fit, which is a fitness watch. There is also a Galaxy Fit e, which, similar to the Galaxy S10e, is a toned down version of the Galaxy Fit. As for the Galaxy Buds, these look like one of the most promising Apple AirPod rivals.

The Galaxy Watch Active is the successor to the Samsung Galaxy Watch. It gets a design overhaul and as the leaked renders suggested, the rotating dial is now gone. Flaunting a sleeker form factor, the device gets 5ATM of water resistance, along with  MIL-STD 810G certification, and is capable of automatically detecting six different exercises. It also features real-time coaching, can track sleep and one will also be able to use Bixby’s voice capabilities for placing calls or sending messages without using the smartphone it is paired with. The Galaxy Watch features 4GB of internal storage and comes with WiFi, Bluetooth and payments support via NFC. It sports a 1.1-inch 360x360 AOD display that is protected with Gorilla Glass 3 and is powered by the Exynos 9110 SoC. It comes with 768MB RAM and is backed by a 230mAh battery. It runs on the Tizen-based wearable OS 4.0.

The Galaxy Watch Active comes equipped with an array of health-centric features as well. It carries over Blood Pressure monitoring from its predecessor and one can use the option by downloading the My BP Lab research app. As per Samsung, the app has been developed in collaboration with the University of California, San Francisco (UCSF). It also sports Stress Tracker functionality to check stress levels and offers breathing exercises as well. The Fitness tracking feature on the device will enable users to select and track from more than 39 activities. The Samsung Galaxy Watch Active comes in Silver, Black, Rose Gold, and Sea Green colour options.

Samsung says the Galaxy Fit and the Fit e fitness bands are aimed at delivering "everyday fitness for everyone." The devices weigh 23g and offer most of the health tracking features one would expect from a fitness band. The Galaxy Fit features a 0.95-inch Full-Colour AMOLED display with a 120 x 240p resolution and 282 PPI density. On the other hand, the Fit e is equipped with a 0.74-inch PMOLED display and sports a 64x128p resolution at 193 PPI. The Galaxy Fit runs on the MCU Cortex M33F, which is paired with Cortex M0 SoC, while the Fit e runs on MCU Cortex M0. The devices run on Realtime OS and are touted to work for a week on a single charge with the 120mAh battery on the Galaxy Fit and 70mAh battery on the Galaxy Fit e.

The Samsung Galaxy Buds directly compete with the Apple AirPods and other truly wireless earbuds. Apple has an edge over the competition with the AirPods since they deliver good battery life and the carrying case is quite compact. The wireless earphone by Samsung takes on the competition by exhibiting almost similar compact form factor and adds additional features to the mix like the ability to be wirelessly charged. In case one is running out of power on the earphones, they can simply use Wireless Power Share on their Galaxy S10, or any other wireless charger, to top them up. As most wired headphones, the Galaxy Buds are also tuned by AKG. 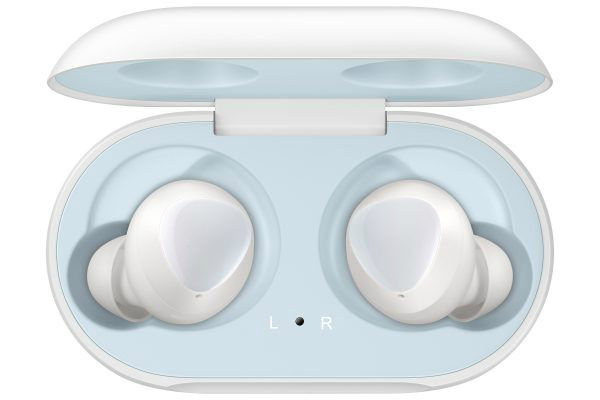 The Galaxy Buds feature adaptive dual microphones that switch the source of audio between the outer and inner mic depending on how noisy the ambient environment is. The device is touted to be 30 percent lighter than its predecessor with an individual earbud and the charging case weighing 5.6g and 39.6g respectively. The device is claimed to stream up to 6 hours of music on a single charge and also comes with Bixby to support voice commands. Samsung also announced that Bixby now recognises instructions in British English, German, Italian and Spanish languages. The Galaxy Buds sport a Type-C connection and come equipped with a 5.8pi Dynamic Driver. It supports SBC, AAC, and the company’s proprietary Scalable audio codec. The Galaxy Buds will be available in Black and White colour variants.

The Samsung Galaxy Active is priced at $199.99 (Rs 14,205 approx) and will be available in the US from March 8. Samsung is offering a free wireless charging pad to consumers who pre-order the smartwatch. It comes in Silver, Black, Rose Gold, and Sea Green colour options.

Coming to the Galaxy Buds, the truly wireless earbuds are priced at $129.99 (Rs 9,233 approx) and will be on sale in the US from March 8. Those who pre-order the Samsung Galaxy S10 or the S10+ will get them for free. The Galaxy Buds will be available in Black and White colour variants.

India pricing and availability of the Galaxy Watch Active, Galaxy Fit, Galaxy Fit e and the Galaxy Buds is yet to be announced. However, we will update this article when the company shares these details.