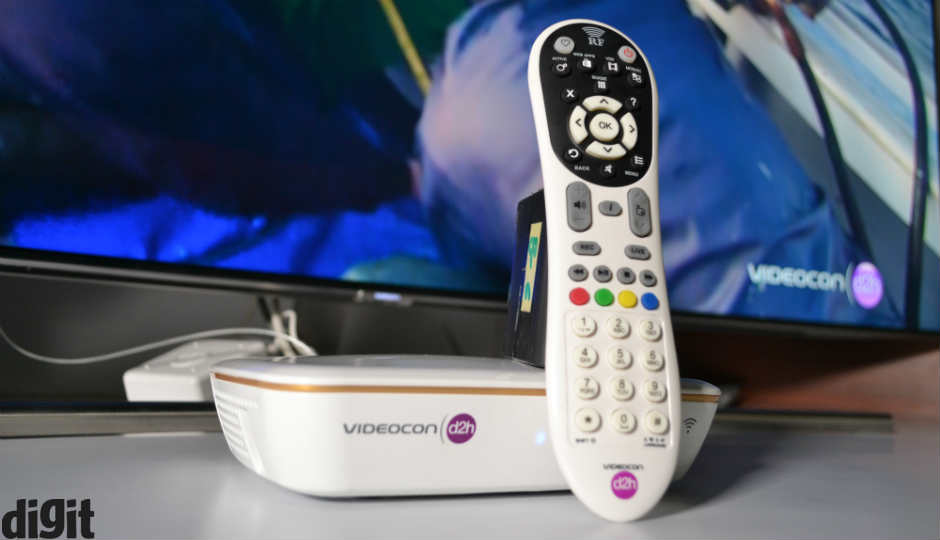 When you think of a smart box sitting under your TV, chances are you are thinking of one of these and also presuming that it runs on Android. Today, we have with us the Videocon d2h HD Smart Connect Set Top Box. The STB supports FHD only and not 4K. It also doesn’t support Android, instead going for a more simplified approach by being an Internet enabled box. Does it have what it takes to compete with likes of Airtel Internet TV or even your SmartTV? 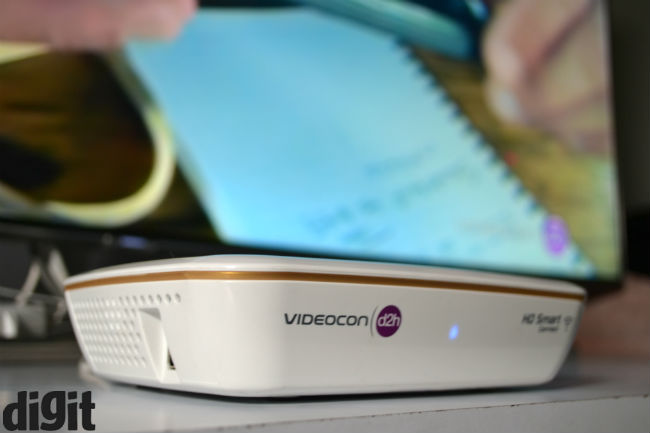 The Videocon d2h HD Smart Connect Set Top Box is priced at Rs 3490 for a new connection. If you are upgrading from an existing connection you will have to pay Rs 2490. TO give you some perspective, the Airtel Internet TV powered by Android will cost you Rs 4,999.

Kicking things off with the build and design, the Videocon d2h has a simple rectangular design with rounded edges. It is white in colour and has a plastic build which makes the STB quite light in weight. When you pick the box up, its easy to describe the build quality as cheap, but then again how many times do you pick up your set top box once it's installed? 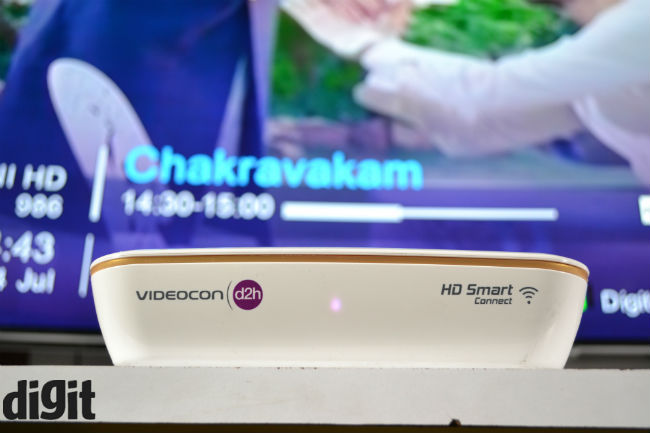 There is one light on the front of the box which signifies the standby/on status of the box. At the back, you have the standard array of connectivity options – RCA, HDMI, Ethernet, USB and power. There is also one USB port on the side. Overall, the build of the set top box is not good, but acceptable. It isn’t the most ideally built box out there, but the white colour is a saving grace. 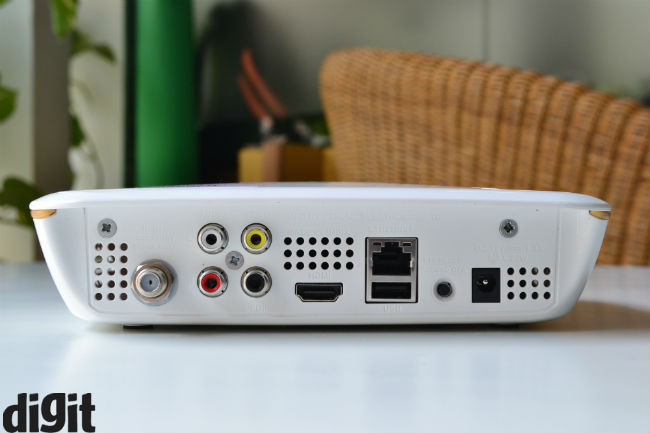 Coming to the remote control provided with the Videocon d2h box, it's slender, light, white, long, and for some reason reminds me a lot of the remote control from the Adam Sandler movie, Click. Because its thin and long, the first thing that sticks out is how inconvenient it is to navigate the entire remote smoothly with one hand. If you are controlling the channels and volumes via their dedicated keys which sit in the middle of the remote, and want to access the web apps button or guide button (located at the top of the remote), you will have to physically move the remote in your hand and this can be quite distracting when you are in couch potato mode. It is also possible that my hand is too small for single handed operation on this remote. 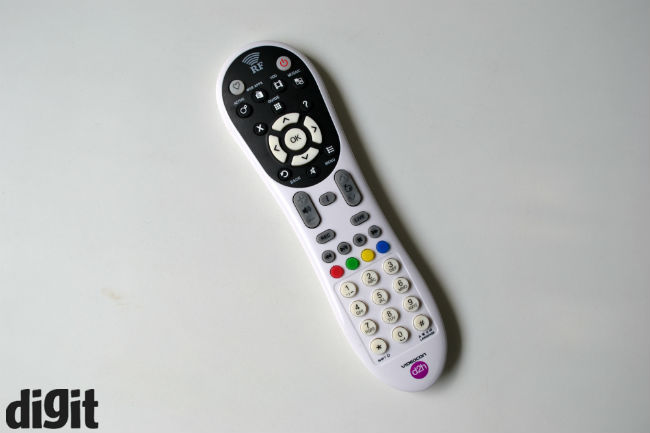 The remote runs on a button cell. The question is why did Videocon go with this, instead of the standard AAA batteries? It isn’t the kind of thing you have lying in spare at home. One good thing about the RF remote is that you don’t have to point it directly at the box for it to function. While watching TV, there are many times when I pointed the remote in the air out of habit and changed the channel or volume, and the response was instant. 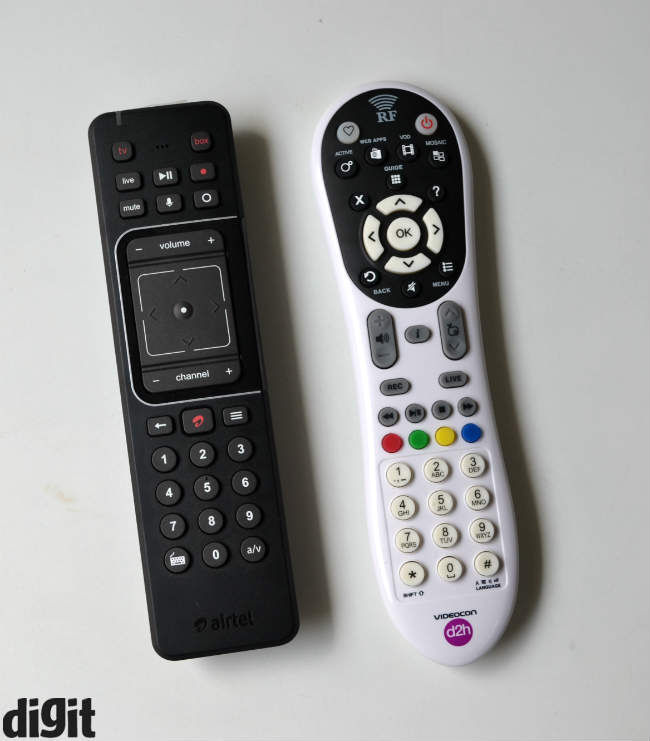 Apart from boasting of the standard array of SD and HD channels, the Videocon d2h Smart Connected Box also boasts of a host of internet enabled apps and features. You can connect the box to the internet via Wi-Fi or Ethernet. A problem we encountered was that during the Wi-Fi setup process, the $ symbol wasn’t available. Upon connecting with the technician, he asked us to use the Rupee symbol instead and it worked. So, if your Wi-Fi password has the $ symbol in it, when inputting the password on the TV, use the rupee symbol. Actually, use Ethernet. It will make your life a whole lot simpler. 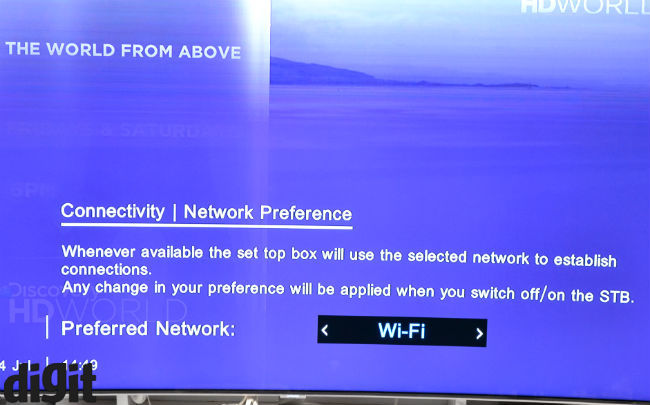 One really cumbersome feature of the Videocon d2h Smart Connected Box is the process of inputting the password. Rather than having a QWERTY onscreen keyboard, the device uses the number buttons on the remote control in the T9 format found on features phones. The process goes beyond annoying and if like me, you have a password like ‘Paggworf(*$123&)GHTreQW’ then you are in for a treat trying to type that in. Once you are connected to the internet, you have access to “web apps” that house all the Internet enabled features. 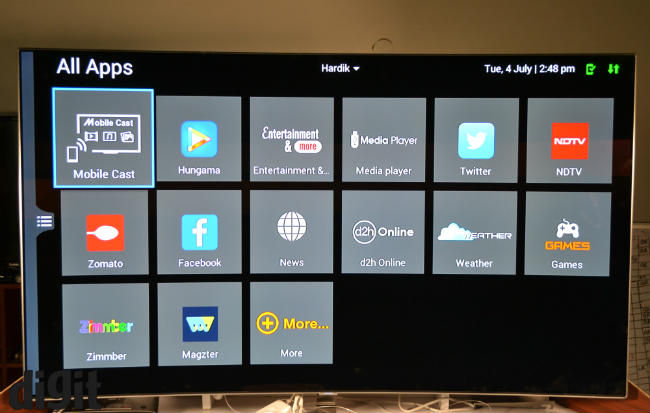 Once you’ve connected the set top box to the internet either via Wi-Fi or Ethernet, you should download the Videocon d2h smart remote app. Put simply, the app has one of the best UI’s and UX with just a few hiccups. Let’s get the worst out of the way. Even though the mobile app has the ability to be a gamepad for playing games on the set top box, we recommend using the supplied remote control to play the games. This is because the remote control has considerably less input lag when compared to the mobile app. 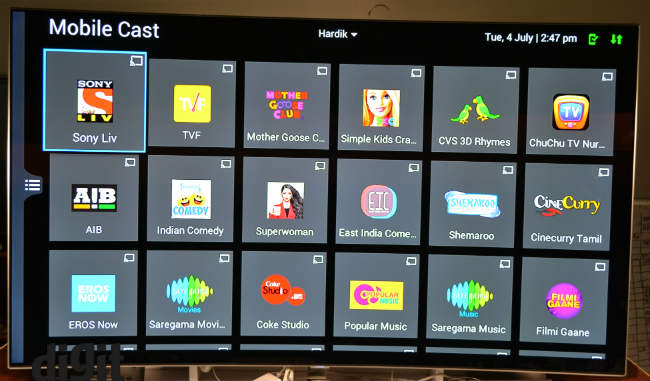 Moving to the interface, once the set top box and your smartphone are on the same Wi-Fi, pairing the TV and the app is a button push away. Once connected, you don’t need the supplied remote control anymore. Fire up the app and you are greeted with a dark blue and black theme which looks very cool. You can swipe left/right at the bottom of the smartphone display to access three different screens. 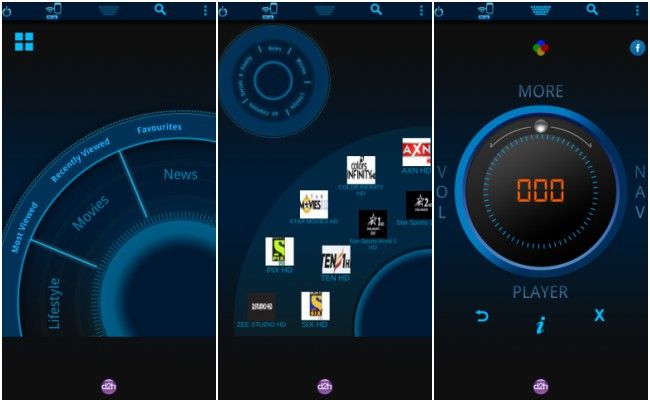 The first screen gives you access to TV channels. They are categorised as lifestyle, movies, news, series and reality, HD channels, and more. This wheel is very responsive and is very easy to use. Clicking on one of the options, for instance HD channels, brings up all the channels under the menu. The icons representing the channels look cluttered and could have been neater. This is jarring only because the rest of the app and UI is so clean. Tap on Star Movies for example and in about one second your DTH will display the channel on your TV. It’s very simple to navigate the channels on your TV using the app.

Swipe to the next screen and you are greeted with the navigation and volume controls. This is also the screen that doubles up as a media control for when you watch movies through the built-in apps. You can also access information like channel and program info from this screen.

Swipe once more and you are greeted to the “smart” apps content. This screen is essentially the mobile cast feature of the Videocon d2h set top box. Content here is listed from the various pre-loaded apps such as Sony Liv, TVF, AIB and more. There are also a bunch of movies that you can watch from apps such as Eros Now and more. Navigating this content is really easy. The vertical scroll shows you the various content sources and the horizontal scroll shows you more content form the particular source. 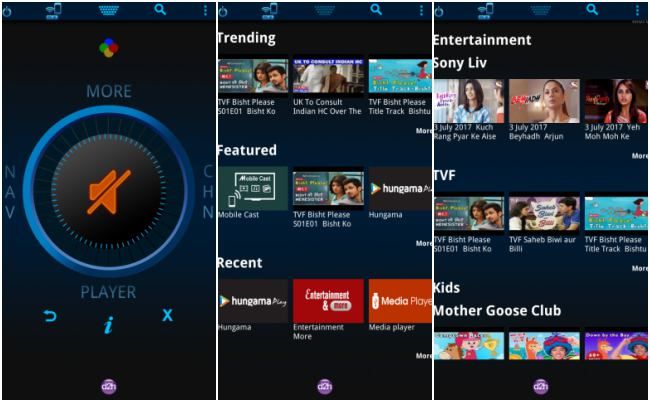 One downside here is that if you are watching regular TV and decide to listen to a Coke Studio song that you found under the mobile cast section, it will take a little over 15 seconds for the content to launch on the TV. That is slow when you compare it to how fast content is streamed from YouTube via Chromecast.

Speaking of YouTube, the app refused to function. Every time we launched the app through the mobile cast option it opened the YouTube app on the smartphone and the video continued to play on the phone.

Last but not least, you can put the set top box in standby mode or switch it on using the app so you don’t always need to hunt for the remote. 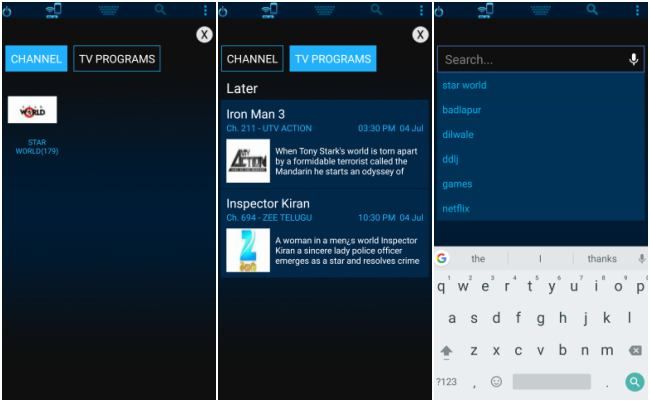 The best part about the mobile cast feature is the amount of content from a number of sources available at your disposal from Hungama to Eros, National Geographic, Ted and more. What’s startling is the absence of Netflix, Hotstar and Amazon Prime videos.

What the Videocon d2h smart remote app does is something similar to the TV app for iOS and Apple TV – bring all the relevant content under one roof. You can use the search function to search for channels (star world for example) and the app will not only let you quickly switch to that channel but show you related programs as well. The app did crash on me multiple times when using search but that’s something that can be fixed via a software update. 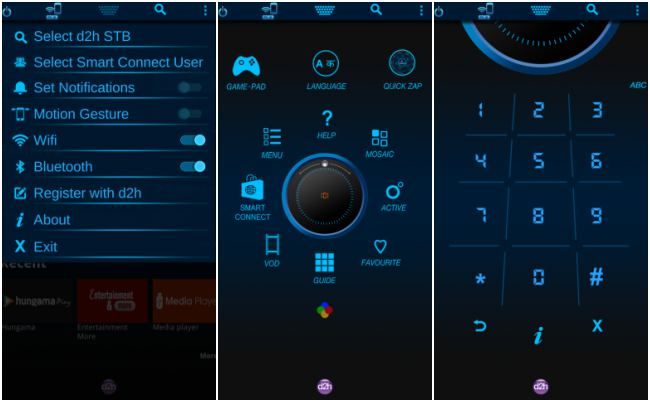 The Videocon d2h Stream Box (Smart Connected Box) is a good attempt at an internet enabled set top box. The lack of Netflix and Prime Videos is noticeable especially if you are a content junkie. The mobile app is very good, but still has some bugs that need to be ironed out.

Should you consider upgrading to this box? Well it all depends on the kind of content you want to consume. If you watch TV channels a lot and are looking for a toe in the ocean of online content then you can consider it. However, if you are a content junkie looking to enjoy content from other online sources like Netflix, YouTube, Prime Videos and more, you may want to consider a dedicated Android box under your TV or devices like the Amazon Fire TV Stick, Chromecast, that are geared towards online content consumption and compliment your old-school FHD set top box very well. Devices like the Amazon Fire TV Stick and Chromecast offer a better Smart TV experience as well. If you own a Smart TV powered by Android, Tizen or WebOS then such a set top box makes no sense for you. 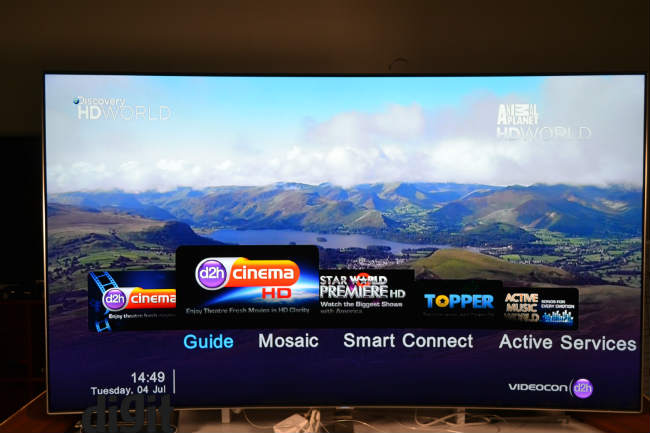