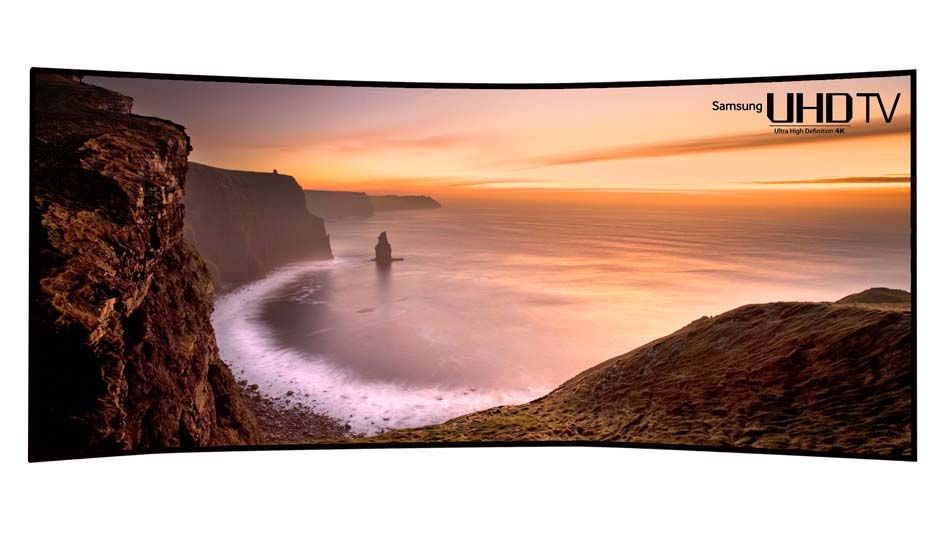 Samsung today unveiled its revolutionary curved television in India which has a whopping dimensions of 105 inches with a 21:9 aspect ratio and is the World’s first curved television that supports Ultra HD (4K) resolution. The new curved TV was first shown off at CES 2014 in Las Vegas and it offers a wide field of view which creates a nice panorama effect. With this Samsung also launched other curved Ultra HD televisions which offer similar experience in a smaller package.

While the humongous size and resolution sounds mind boggling, we got some in-depth info about the new television. 1. Resolution and the curve
The new 105-inch curved TV supports 4K resolution but due to its 21:9 ratio, the actual resolution of the television is 5120x2160. So technically, the resolution is higher than 4K. With a size of 8 feet by 3.5 feet, the TV incorporates more than 11 million pixels. Samsung claims that the curved shape provides the best viewing experience as the human eye is also curved. The curve is 4200R which means the curve is bent at the radius of a 4200mm circle.

2. Up-scaling
In a country like India, where DTH providers have just started providing HD channels and where Blue-ray movies are still scanty, 4K content is nowhere to be seen. To resolve this, the new curved TV offers an up-scaling option which can convert HD and full HD content into 4K. Samsung's up-scaling technology provides a 4-step image processing feature which gives deeper blacks and finer details even after the conversion.

3. Smart TV
The 105-inch curved UHD TV offers smart features like apps and also allows you to browse the internet as well. The TV has built-in Wi-Fi, so if there isn’t a good movie or TV show on, you can just switch over to the internet and maybe watch some YouTube videos.

5. Price
The official Indian price of the television has not yet been revealed although Samsung has confirmed that it will be available in the second of this year. At the time of unveiling in CES 2014, the television was priced at $70,000 which calculates to about Rs. 42 lakhs. For a television, this one is probably the most expensive TV on the planet.