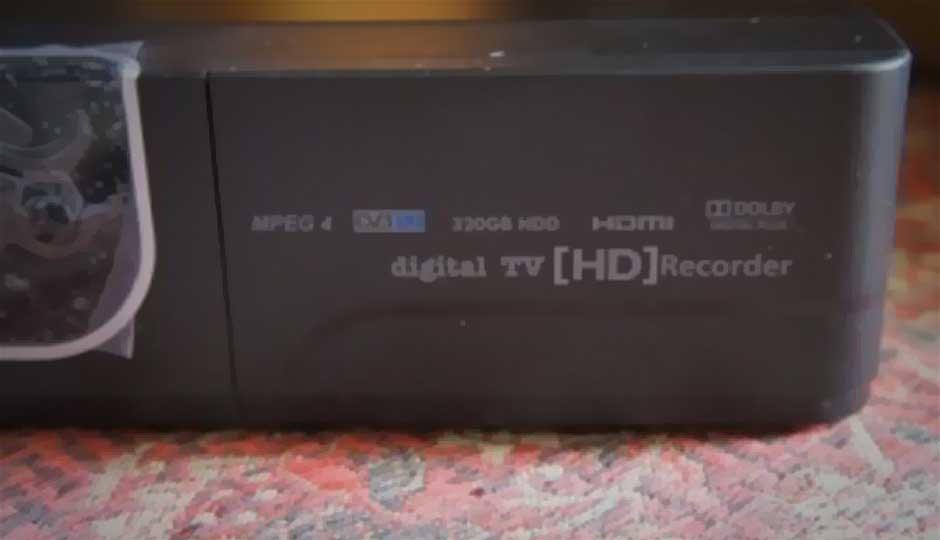 Airtel’s Digital TV HD Recorder is a full-fledged Digital Video Recorder (DVR) that allows you to record programs from all channels, schedule recordings, set series links for auto recordings or even pause and resume Live TV.

The Airtel Digital TV HD Recorder competes against the likes of other HD-DVRs in the market, like TataSky HD, Reliance Digital TV HD DVR and Videocon D2H Satellite HD DVR.

However, unlike the Dish TruHD Plus that we reviewed recently, the Airtel Digital TV's HD Recorder setup that has a 320GB hard drive integrated into the set top box (STB). Looking in through one of the cooling vents, we could see that this is a Hitachi hard drive. We are also hearing that Airtel will activate one of the 2 USB ports on the device to allow recording on an external USB drive as well.

It took about 25 minutes for the entire installation process to happen. The dish was installed in the balcony, and this one faces further east than the TataSky or the DishTV dish antennae. Like DishTV, Airtel is also using multiple satellites transponders for broadcasting channels, and hence use a dual LNB. There are two input cables running into the DVR STB from the dish antennae, allowing you to record two programs simultaneously, or record one while browsing any channel. Compare this to a standard HD box that gets only one cable as input, where the add-on recorder capabilities are considerably limited.

The STB does look well built, and has a premium feel to it. No ghastly LEDs flashing all over the place - just tiny indicators on the front which don’t feel annoying even if you are watching TV in a room with no lights on. There is a complete set of hardware keys on the front panel, including the direction keys that will be immensely useful if you happen to misplace the remote.

Speaking of which, the remote is a universal remote, at least in certain regards. It can be paired with the TV remote to control the television’s power on/off, volume up/down and mute and also the source change. We like the slim design, and the key layout is quite okay. We will reserve our judgment for the time being, since we are getting used to this one.

Stay tuned for a detailed review very soon. In the meantime, you can check out some pictures of the DVR.