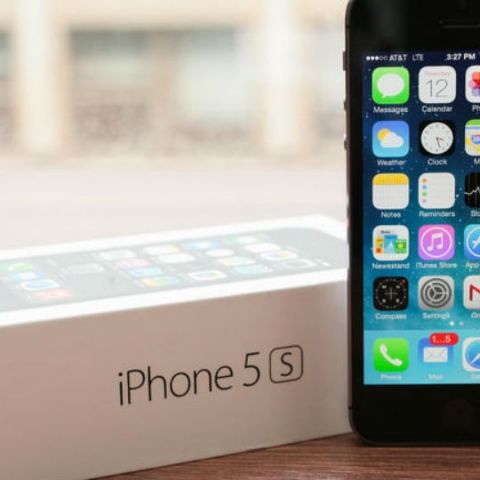 After two years of using the iPhone 5s, here’s why you should consider other options than the iPhone, even at around Rs. 21,000; we also list the phones that are worthy alternatives here.

It has been almost two years since I’ve been using the iPhone 5s, and it is still a fantastic daily driver. In the world of larger displays taking precedence, the 4-inch display still suffices my requirements. To rephrase it, I’m just too used to it, as a result of which I personally find most 5-inch-odd devices a little unwieldy. The iPhone 5s does not hang while playing games, which is reasonably remarkable, considering that it has been through all kinds of torture over the last two years. In such a duration, you would expect compatriot Android devices to fade into oblivion, which they probably have.

That, however, is owing to a number of other factors. The Android ecosystem has a number of phones, and an equal number of manufacturers making the devices. The iPhone, however, is Apple’s flag-bearer. Back in 2013, the iPhone 5s became the first Apple device to incorporate Touch ID – the fingerprint sensor security lock. It also made the switch from a Sony IMX145 image sensor rendering 8-megapixel images, to a Sony Exmor RS CMOS sensor, producing the same megapixel count in images. The screen size was upgraded from 3.5 inches to 4 inches. The overall device became slimmer, while keeping the design principles intact. When I upgraded from the iPhone 4s to the iPhone 5s, the changes were too vivid, and I was very pleased.

Two years have gone by since then, and we have the iPhone 6s flaunting 3D Touch and RGBW image sensors. Right now, it is safe to say that Android devices have evolved manifold, and is right now closer to iOS than ever before. To add perspective here, the latest fingerprint API that Google has integrated with Nexus Imprint is a million times better, faster and more consistent than the Touch ID sensor on my old warrior, the iPhone 5s. While the latest fingerprint sensors unlock phones with a near-feather touch, I often resort to the 6-digit passcode on my device. The fingerprint sensor on the iPhone 5s was never the most consistent, and over time, moisture and accumulated dust, it barely matches and unlocks to my fingerprint for about 40% of the time.

"Android is now closer to iOS than ever before"

The display remains as good as ever, and colours and clarity of the 4-inch Retina display are stellar. The 640x1136 pixels resolution will show you excellent colour depth, sharpness and clarity, and the only qualm that you may have about the display that it is a tad too small. Even after being used to the 4-inch display for so long, I cannot help but agree. The iPhone 5s spent the entirety of its first year and half within a protective casing and screen guards. Only recently, I had to take off its cover (it broke when my phone fell down a staircase) and the screen guard (it was, to put it mildly, a little too tortured). However, the display remains unblemished, barring a few minuscule scratches. Having fallen down a bit too often, I keep reminding myself about how lucky I am that the display has never cracked till date. The metal band running around the sides has picked up a fair few bumps, but apart from that, it remains a brilliant build.

All of this is fine, and the reason for me not upgrading to the iPhone 6s probably has a lot to do with my reluctance of owning large screen devices, and more than that, a price point that I find hard to justify. For about 60-70k, there are a lot of other things to do in the world than just buy a phone, even if it is an iPhone. But, with iPhone 5s prices falling down to as low as 21k, does it really make sense to go for one?

Here’s putting it simply – if you wish to play a lot of games and view a lot of video on your phone, the 4-inch display is too small for you. While most games do not stutter, a number of apps take a second too long to open. Even when switching apps, there is this split-second gap between app switches that you will definitely notice in a world where phones multitask like never before. Keep multiple pages open on Safari, and you will find every page reloading when you switch back to it – while Apple has indeed optimised the iPhone 5s to run smoothly on just 1GB of RAM, it is not enough in the present day of multitasking. At a similar price point, the OnePlus 2 brings with itself 4GB of LPDDR4 RAM, which is not only fast, but massive, if you compare it to the iPhone 5s. With iOS 9, apps are adapting to 2GB of RAM, and with iOS 10, the paradigm is bound to shift entirely. Hence, in one year, the iPhone 5s is almost certain to miss out on a number of apps.

"Two years have gone by since the glory days"

The fingerprint sensor is almost certainly outdated, and with Sony rolling out Exmor R Mobile and IMX3-- series image sensors for smartphones, so is the 8-megapixel Exmor RS Mobile image sensor on the iPhone 5s. The Apple A7 SoC is fast enough for regular usage, but try operating Facebook, Apple Music and Safari at the same time – pages take at least 2-3 seconds to load, and Apple Music’s homepage takes even longer to appear. The 1560mAh battery, on heavy usage, drains itself out in as less as four hours – a major, major letdown.

Even though the price has been slashed down to around 21k, smartphones like the OnePlus 2 and the Honor 7 make much more sense now, keeping in mind that if you are spending around 25k for a phone, you will probably wish to use it for around two years. While the iPhone 5s is still a decent device, the small screen, abysmal battery backup, occasional stutters and even image quality is not the best of the pack, and if you do buy it, you will find it thoroughly outdated in a year, at the most.

It might be an iPhone, but to be very honest, you’d rather buy a competent Android smartphone, and not have an iPhone.