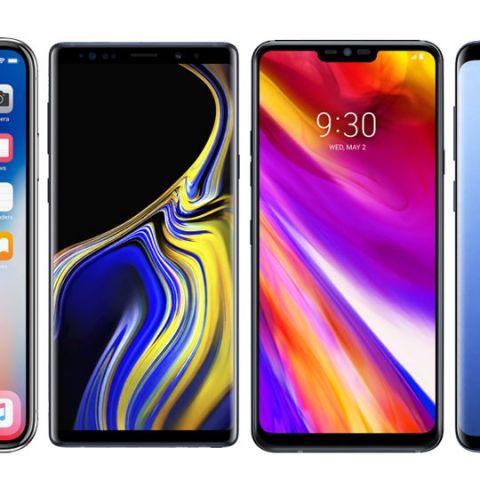 If you marry the size of the Note 8 with the build and design of the Galaxy S9 Plus, you have the Note 9. The position of the fingerprint sensor has been changed to sit below the camera for easy access. The back is glass and supports wireless charging. It will be available in 128 and 512GB storage giving the device ample storage. Add to it the fact that the device can house a microSD card and you are looking at a whopping 1TB of storage on the go. We will take an in-depth look at the smartphone when it launches in India. Today, let’s see how it stacks up against the competition, at least on paper. We’ve thrown in the Galaxy S9+ as well to see how different it is from the Note 9. For this comparison, we have the iPhone X and the LG G7 ThinQ.

The size difference between the Galaxy flagship smartphones and the Note series smartphones isn’t what it was a couple of years ago. With the new 18:9/19:9 form factor, we have taller displays and they can only get so tall before falling into the tablet category. All the phones in this list sport the new tall form factor and the Apple iPhone X is the shortest of them all. Another element of design where Samsung hasn’t wavered is with the notch. Ever since the iPhone X, every smartphone maker is adopting the notch. Samsung didn’t add the notch on the Galaxy S series device and it is sticking to its guns with the Note series as well. All the smartphones in this list ooze glass and feel premium in the hand and we except the Samsung Galaxy Note 9 to be no different.

Samsung flagship smartphone displays are extremely vibrant, especially when consuming video content and the Note 9 is no different. If our experience with the S9 is anything to go by, then the Note 9’d display will be a treat to watch content on. Till now the iPhone X has managed to hit the sweet spot of an OLED display without oversaturating things like Samsung’s displays and still holds a high place in our display tests. Whether the Note 9 can dethrone it is something we will tell you in our review. As for the LG G7, the device has an IPS LCD display and it may not be the most vibrant, but it produces good accurate colours.

Qualcomm Snapdragon 845 vs the A11 Bionic vs the Exynos 9810 Octa is the game here and if benchmarks are anything to go by, the A11 Bionic is miles ahead of the other two as far as raw performance is concerned. The Snapdragon 845 and Exynos 9810 Octa are no slouches either. Coupled with a healthy helping of RAM, all these SoC’s can multitask well in a heartbeat. All the above-mentioned phones haven’t let us down in anyway yet.

If the iPhone is the king of performance, then the Galaxy S9+ is the king of photography. Its camera can challenge the iPhone X and surpass it in many ways. Samsung can easily go for an “if it ain’t broke don’t fix it” policy with the camera on the Note 9. The Samsung Galaxy Note 9 brings the dual aperture of the S9 to the fold, but also adds some intelligence to the picture. How all of this works is something we will have to share with you after we’ve put the phone through its paces in our review.

What good is a flagship device if it doesn’t last you the day. With the Note 7 Samsung had some explosive issues with the battery, so they played it safe with the Note 8. The Note 9 on paper has a 4000mAh battery which is 1000mAh more than the LG G7 ThinQ and 1284mAh more than the iPhone. Considering the size of the display, the hardware on offer and the and the capabilities of the device, it will really need a lot of juice to last the day. 4000mAh may seem like a lot on paper, but we will tell you in our review if the Note 9 can last long. The other phones on this list will struggle to make it through a power users day and that is an issue smartphone tech hasn’t been able to solve in the past few years.

Apart from the new stylus S-Pen, there isn’t much distinguishing the Samsung Galaxy S9+ from the Samsung Galaxy Note 9. Like we said above, there used to be a market for large screen phones that was taken care of by Samsung’s Note series devices. Is the Note family of devices still relevant or should the Note replace the smaller Galaxy S sibling? That is a debate for another day. The iPhone may look like the weakest on paper and apart from the battery, it is a solid all round performer. The LG G7 ThinQ is the underdog in this list, not for a lack of performance. The Samsung Galaxy S9+ is the current king of premium Android smartphones but it has lost a lot of market share to OnePlus in this David vs Goliath match. As for the Samsung Galaxy Note 9, only time will tell if need to take note!