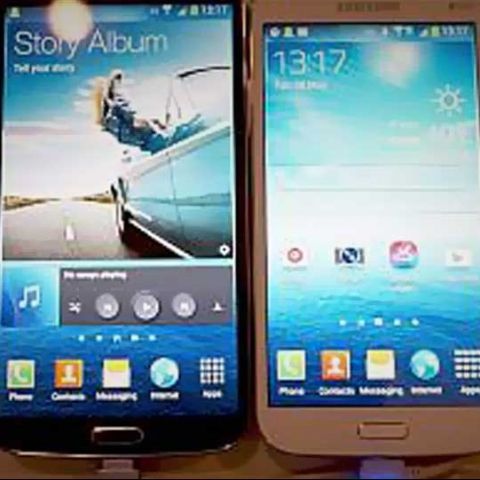 Samsung seems to be launching smartphones in all price brackets and in a variety of screen sizes from 3-inches all the way up to 6.3-inches. Today, the company launched two large screen devices that fall under the Galaxy Mega series. One of the devices has a 5.8-inch display and the other has a 6.3-inch display. Read on for our first impressions of the two smartphones / phablets.

Starting with the 8mm-thick Samsung Galaxy Mega 6.3, the phablet has a 6.3-inch TFT display with a 1280x720 pixel resolution, and weighs in at 199 grams (not too bad for its size). It is powered by the Qualcomm Snapdragon 400 chipset, featuring a 1.7GHz dual-core Krait processor along with the Adreno 305 GPU. The Galaxy Mega 6.3 sports 16GB built-in storage expandable up to 64GB via a microSD card. A 3,200mAh battery powers the device. The Samsung Galaxy Mega 6.3 is priced at a whopping Rs. 31,490

The 6.3-inch display of the Galaxy Mega 6.3 is really vibrant and crisp to look at. The form factor of the device is tried and tested Samsung with an overall plastic body. Below the display you have the standard back and menu capacitive buttons along with a physical home button. Above the display you have the earpiece and the front facing camera. Reading text, surfing the web and browsing through Google Books on the Mega 6.3 was a treat. In the indoor conditions where we saw the phone, the viewing angles were good too. The rear of the Mega 6.3 has a textured design but the finish of the rear panel is smooth, just like the S3 or the S4.

The volume rocker is on the left of the Samsung Galaxy Mega 6.3 and the power button rests on the right. The bottom has the microUSB port for charging and data transfer where as the top has the headphones jack.

The Android 4.2 Jelly Bean OS is skinned with the latest TouchWiz UI, and if you have used a Samsung Galaxy S4, you will feel right at home. The Mega 6.3 brings with it much of the added functionality found on S4, such as multi-window, one hand use (since the display is so big, the keyboard and other essential functions shift to one side of the screen for easier use). You also have access to the usual S Planner, S Memo, S Translator and more features that were introduced with the Samsung Galaxy S4 such as the Samsung Link where you can share songs, videos and more with other Samsung devices and view them together.

The looks and appearance of the Mega 5.8 is the same as its bigger sibling and it also brings the same features to the tablet. Essentially the difference is in the chipset, the clock speed of the processor and the built-in storage. The user of course cannot see all these difference. The biggest difference that you will notice when you place the two Mega phablets side by side is with the display. On a 5.8-inch display the resolution is just qHD pixels. This has helped in keeping the cost of the device down, but the display isn’t as exciting as the Mega 6.3. It also looks a little washed out with rough edges and some pixilation. Sure, videos ran smoothly and looked good, but browsing the web and reading text could have been a better experience.

The Galaxy Mega 5.8 too brings with it the Samsung suit of features such as multi-window; pop up play, one hand operation, and more.

On first impressions the Samsung Galaxy Mega 6.3 looks more impressive than its younger sibling as an overall package. Stay tuned, as we will bring you our complete review of the two phablets soon.