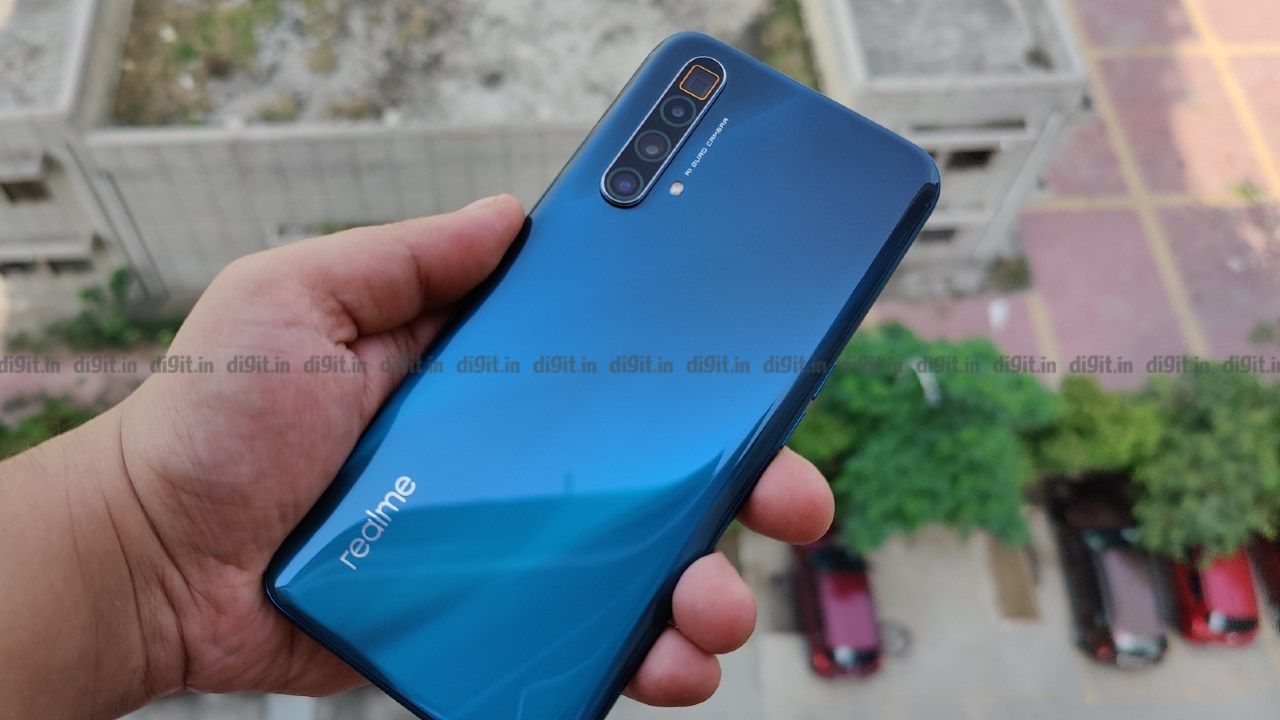 The Realme X3 SuperZoom(₹ 29490 at amazon) comes loaded with a bunch of features that puts it right in the league of some premium flagship smartphones. A periscope telephoto lens, 120Hz refresh rate, and ASTROPHOTOGRAPHY! Well, maybe except the Snapdragon 855+, but that too seems like a very practical thing to do. Add to that, an IPS LCD display, which many on social media pointed out isn’t carved out for the high-end segment anymore.

The phone also launched amidst a loud, rancorous campaign to boycott Chinese products, and even with all efforts from the Realme India team to plaster themselves as an Indian brand, social media has not been very forgiving.

Now, it’s still among the early days of this device landing up in our labs, and due to the movement restrictions in place, we haven’t been able to test the camera out to its full extent. But even for the limited time I have been using the device, the Realme X3 SuperZoom comes across as a pragmatic, practical and more importantly, an affordable flagship smartphone. 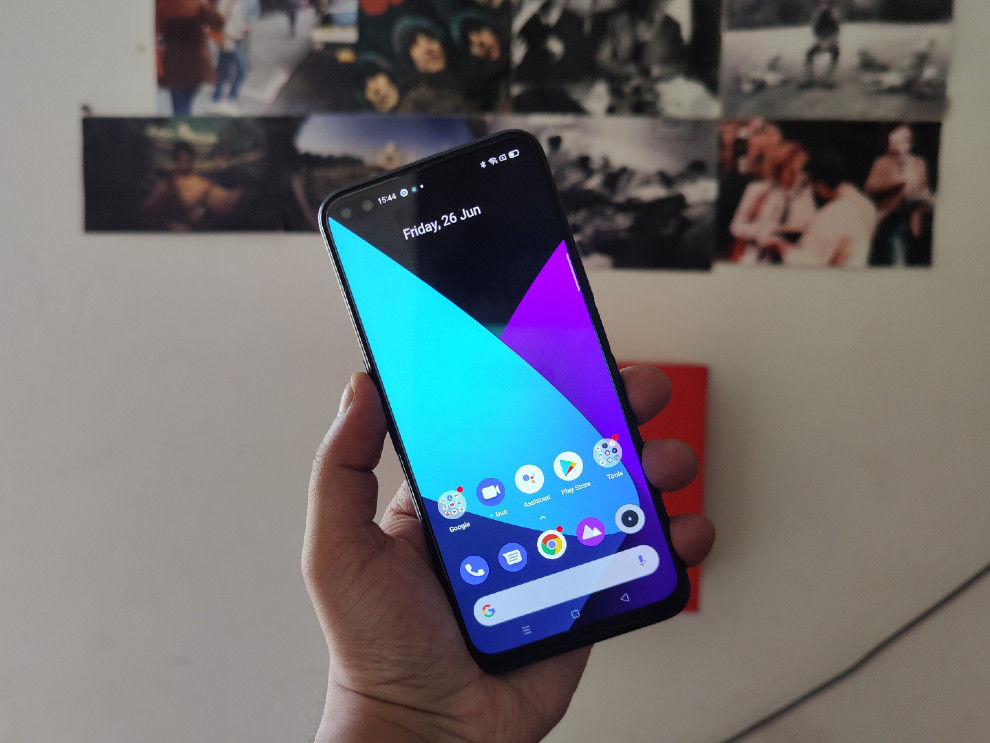 Let’s address the elephant in the room first. The Snapdragon 855+ has started featuring again in 2020. Not the first time we saw this. Early this year, Samsung also took us by surprise by launching the Galaxy S10 Lite with last year’s flagship chipset. So what gives?

The Snapdragon 865 needs to be paired with a discrete 5G modem, which needs the extra space in an already cramped interior. So it could have come down to a choice between putting a periscope camera setup, or a 5G modem inside the Realme X3 SuperZoom. And between these two, there are no points for guessing which is more useful, at present.

Even if that’s not the case, the price differential between high-end phones of 2019 and 2020 is staggering. Right now, the only Snapdragon 865 smartphone under Rs 40,000 is the iQOO 3, that too the 4G variant which was possible by not opting for the 5G antennae and other components that add to the BOM costs. Which is probably the biggest reason for OEMs to still choose the Snapdragon 855+.

How much do you lose out by having an old chipset?

It’s still less than a year that the Snapdragon 855+ was announced. That’s how fast smartphone hardware evolves these days. But that evolution is not matched by anything on the Google Play Store which would make a difference in performance. Benchmarks too don’t project a massive leap. There's about a 15 percent improvement in benchmark scores on an average. Take a look at a quick benchmark comparison between the Realme X50 Pro (Snapdragon 865 with 5G support), the Realme X2 Pro (Snapdragon 855+) and the Realme X3 SuperZoom (Snapdragon 855+). We tested the 12GB RAM variants of all three of these units. 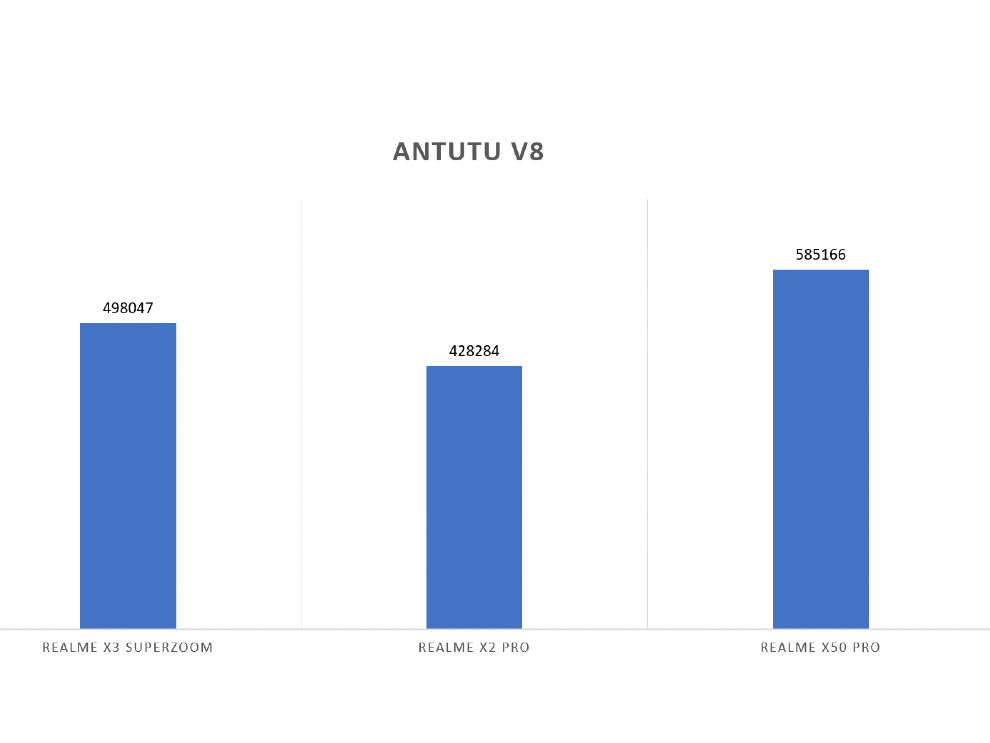 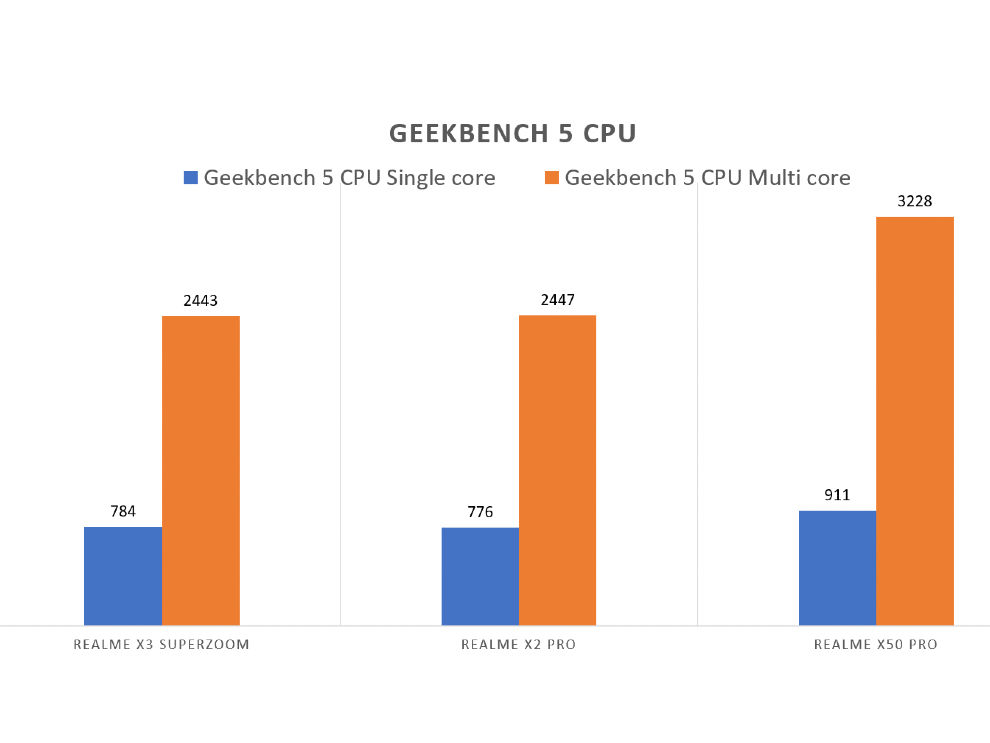 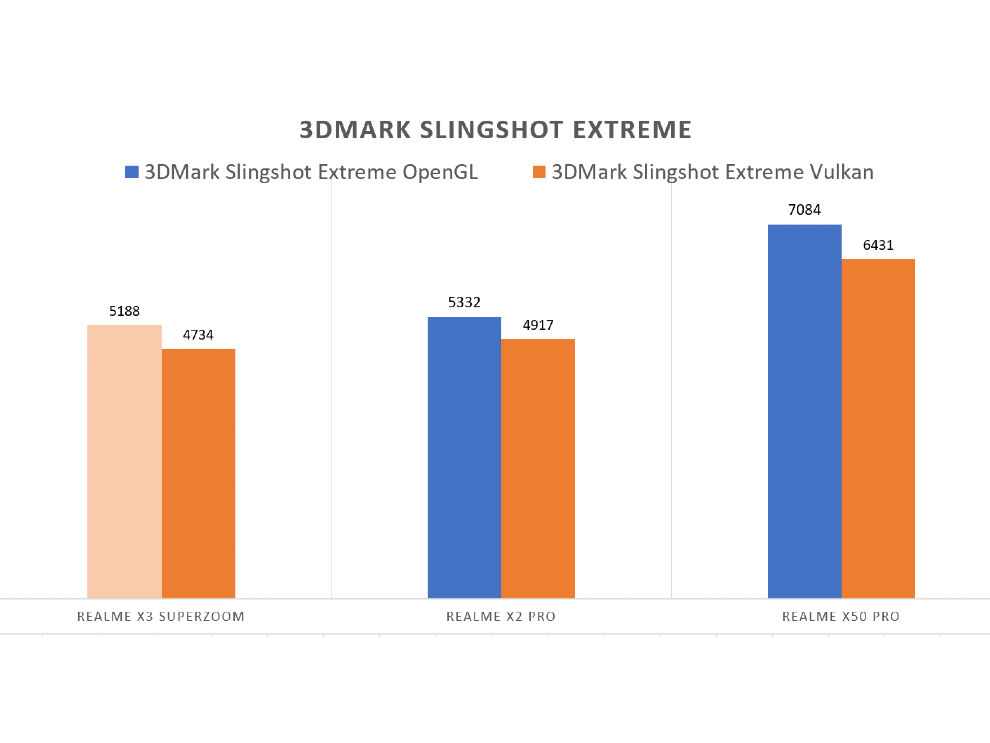 While you do see some improvement in the scores, it’s unlikely you’ll feel that big of a difference in actually using the smartphone, in terms of how fast apps open, or how smooth games run. We played a few rounds of Call of Duty: Mobile and PUBG Mobile on the three phones and sure enough, the Realme X3 SuperZoom performed well enough with 60 FPS on COD Mobile and 59 FPS on PUBG Mobile. Having said that, the Realme X50 Pro still offers the best performance among the three. 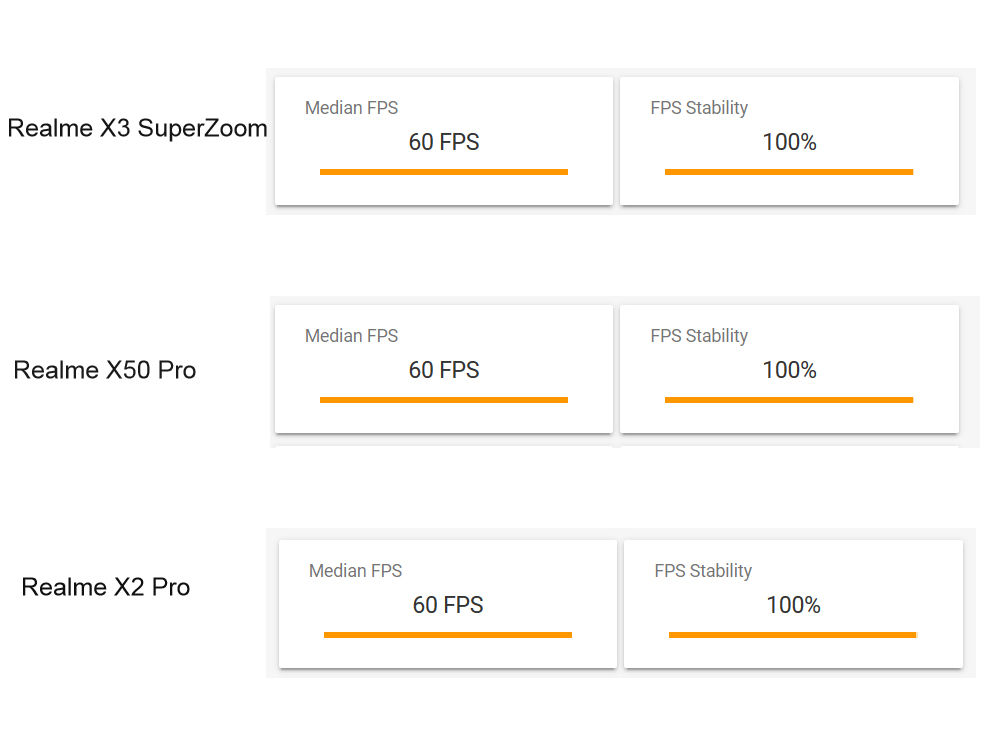 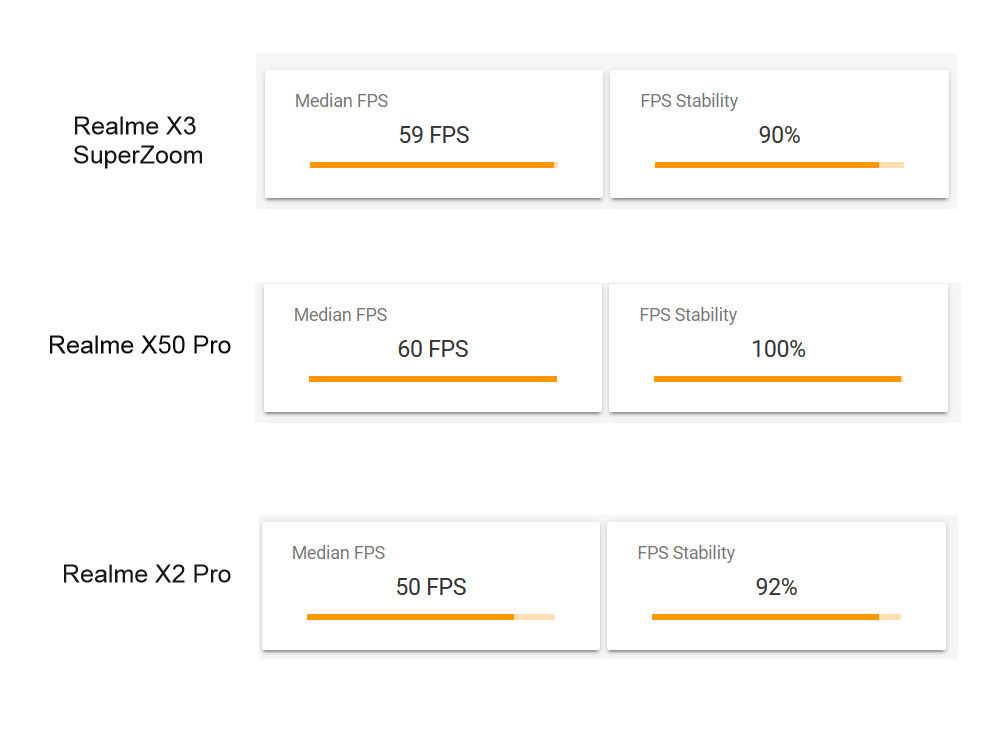 Even the UI is the same across all the three smartphones, and there’s nothing on the Realme X50 Pro software that you don’t get on the Realme X3 SuperZoom, ads and spam notifications included.

You do miss out on the HDR10+ certification, and Dolby Atmos stereo speakers with dual amps which actually make a big difference when you’re playing a game or watching a movie. But is it really that big a compromise?

Cameras: No compromise, on paper 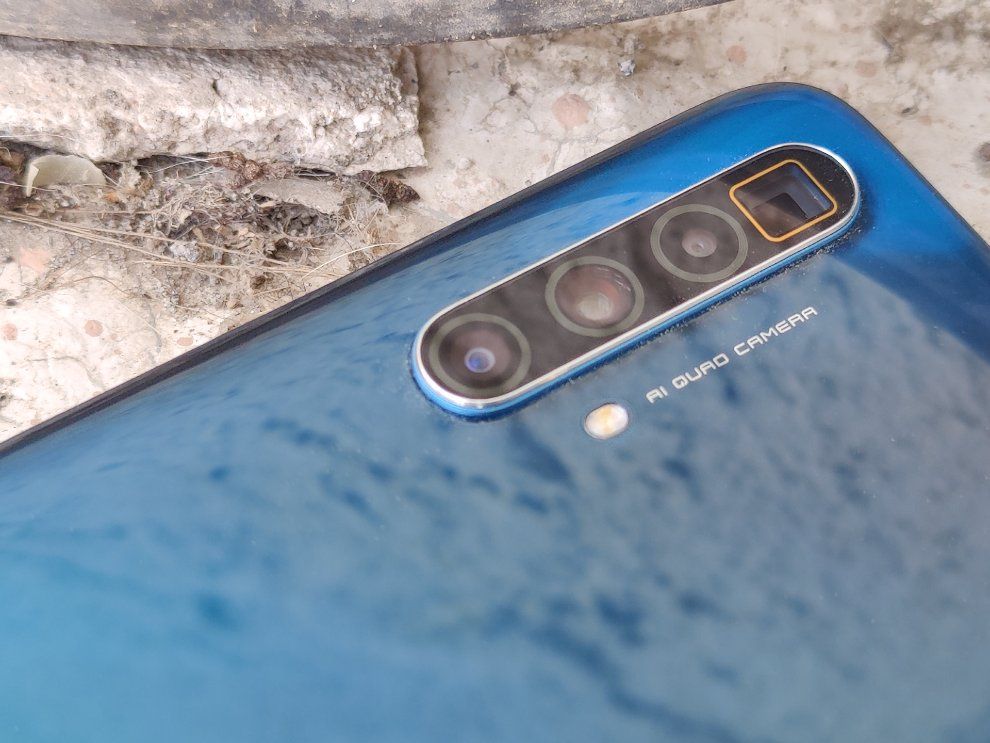 Then again, the Realme X50 Pro sort of makes up for the shortcomings by focusing on the camera, and hoping that the 120Hz refresh rate will mask what lacks in the display experience. It’s a strategy Poco used for its comeback with the Poco X2, but with a lot more at stake. Here’s how the cameras on the Realme X3 SuperZoom differ with the likes of the Realme X50 Pro and the Realme X2 Pro. 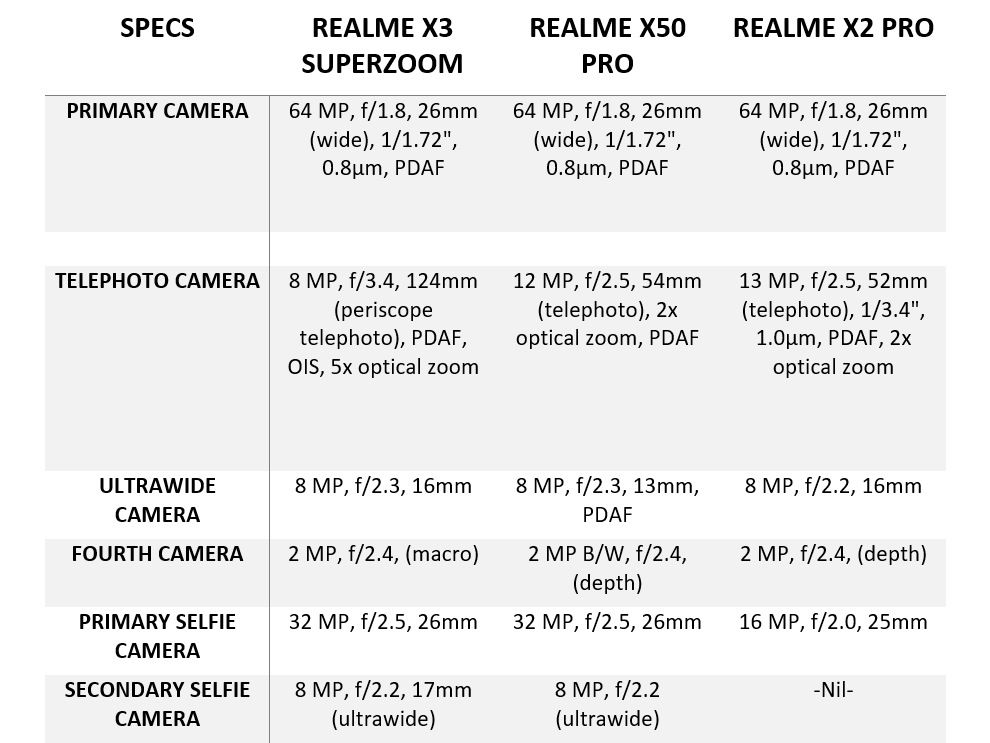 All three Realme phones in this comparison use the same primary camera. The 64MP Samsung ISOCELL GW-1 sensor with the same 26mm lens and PDAF. Even the sensor on the ultrawide seems to be the same 8MP on all three, with the X50 Pro getting a wider 13mm lens and PDAF, where the other two have 16mm lenses with no autofocus.

But it’s the telephoto lens on the Realme X3 SuperZoom which steals the show and is probably the sole reason to get this smartphone. Because no other smartphone in this price range gives you a periscope telephoto lens with 5X optical zoom. The next best thing is the Oppo Reno 10X Zoom, but there you will be going back yet another generation of the 8-series Snapdragon SoC.

One more thing that seals the Realme X3 SuperZoom’s fate as a camera-heavy flagship is its lowlight capabilities. It’s right now the only smartphone in India to boast of a dedicated astrophotography mode. While I’m yet to visit a point with no light pollution to test out the ‘Starry Mode’ on the X3 SuperZoom, the tech seems a point-blank rip-off of Google on the Pixel 4 series. With Pixel 4 skipping India, I’m not complaining.

The ‘Starry Mode’ relies on four major parameters — ISO, shutter speed, focusing distance and white balance. The phone takes 10 long-exposure photos and uses multi-frame synthesis to bring out the stars and according to Realme, even the Milky Way. The algorithm basically brightens the stars, removes star-tracks by ghosting and adds noise reduction to smoothen the dark sky. Of course, it requires the phone to be placed on a flat surface or a tripod.

It’s also the only smartphone to offer a pro mode in the Night Mode itself, letting you adjust the ISO, shutter speed, white balance and focus, which is great for enthusiasts, and something we will certainly test in the in-depth review. Meanwhile, here are a few photos we clicked with the Realme X3 SuperZoom confined in my housing society — 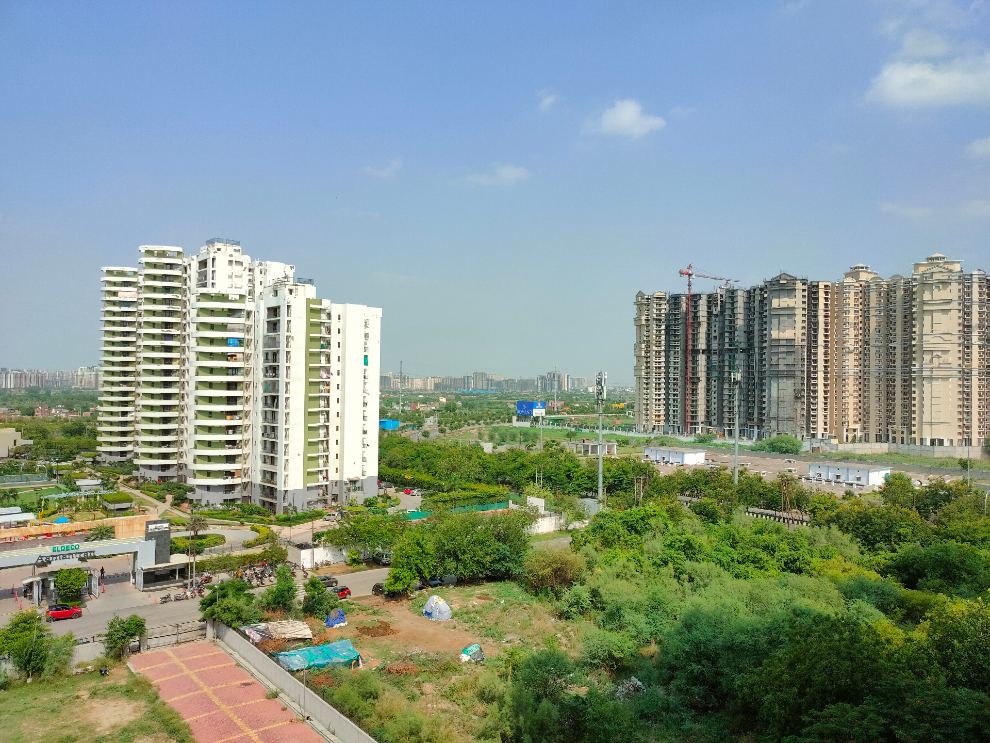 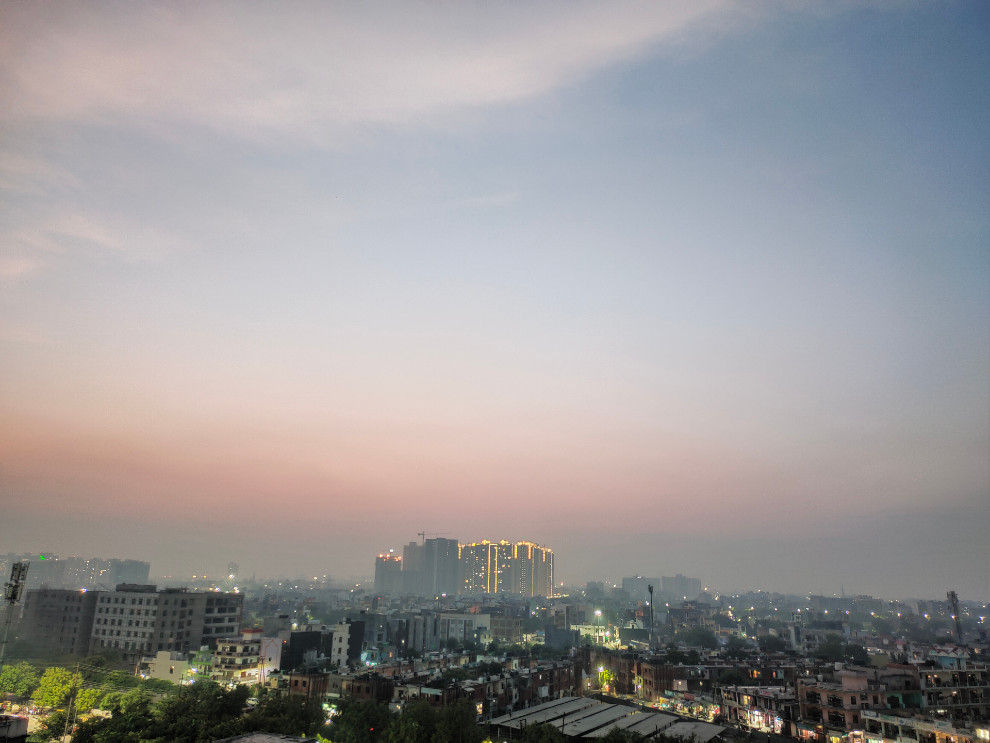 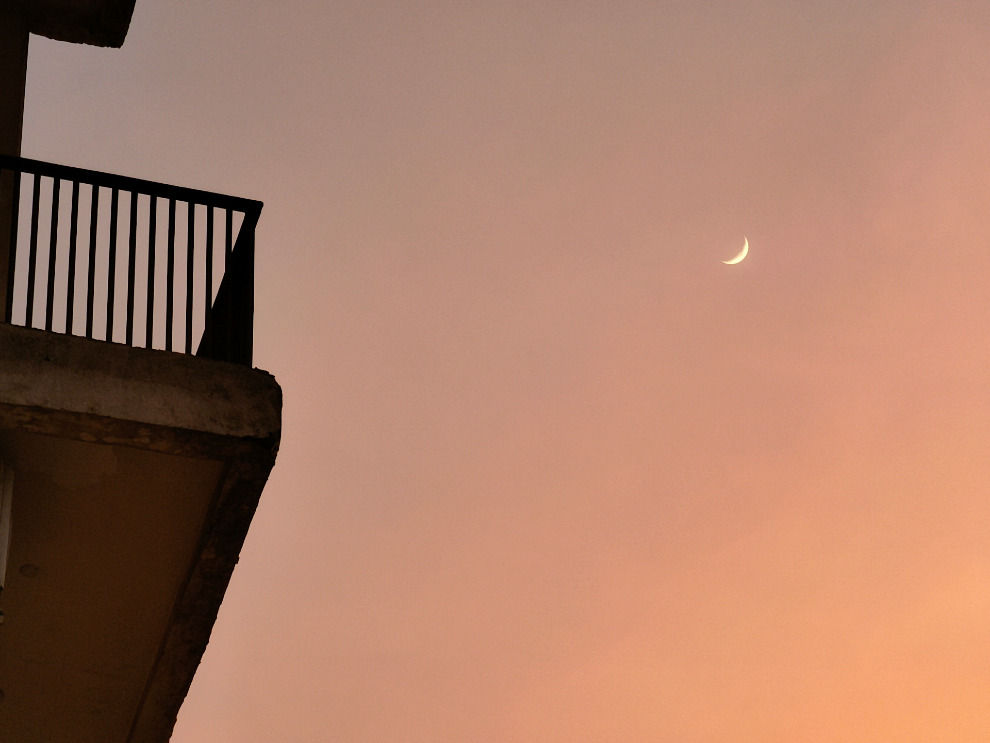 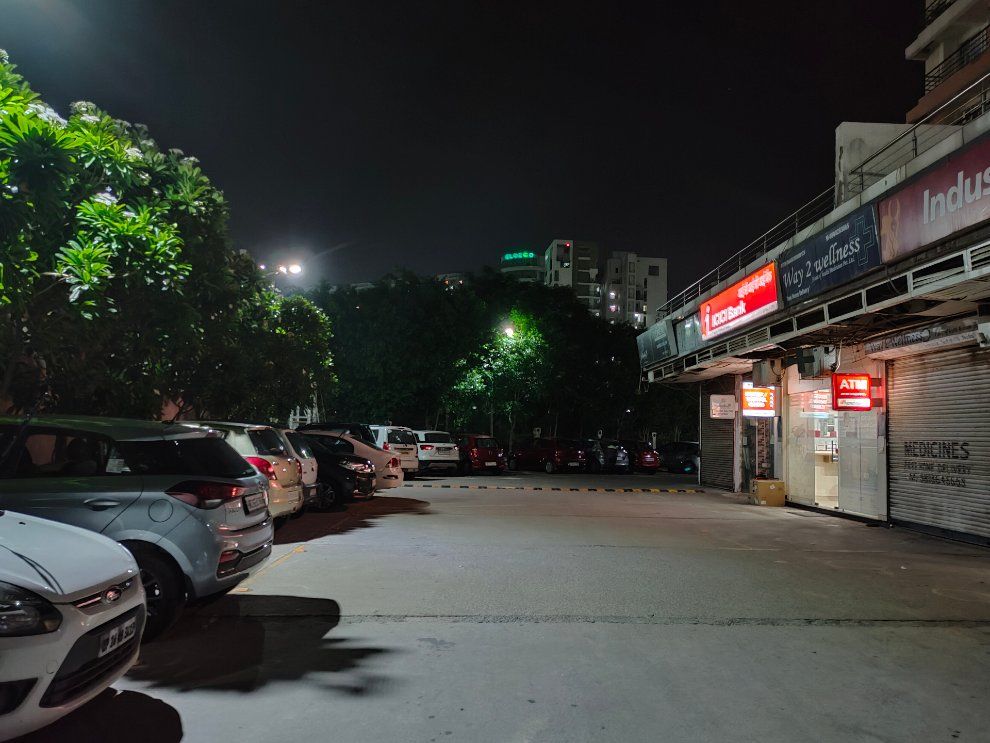 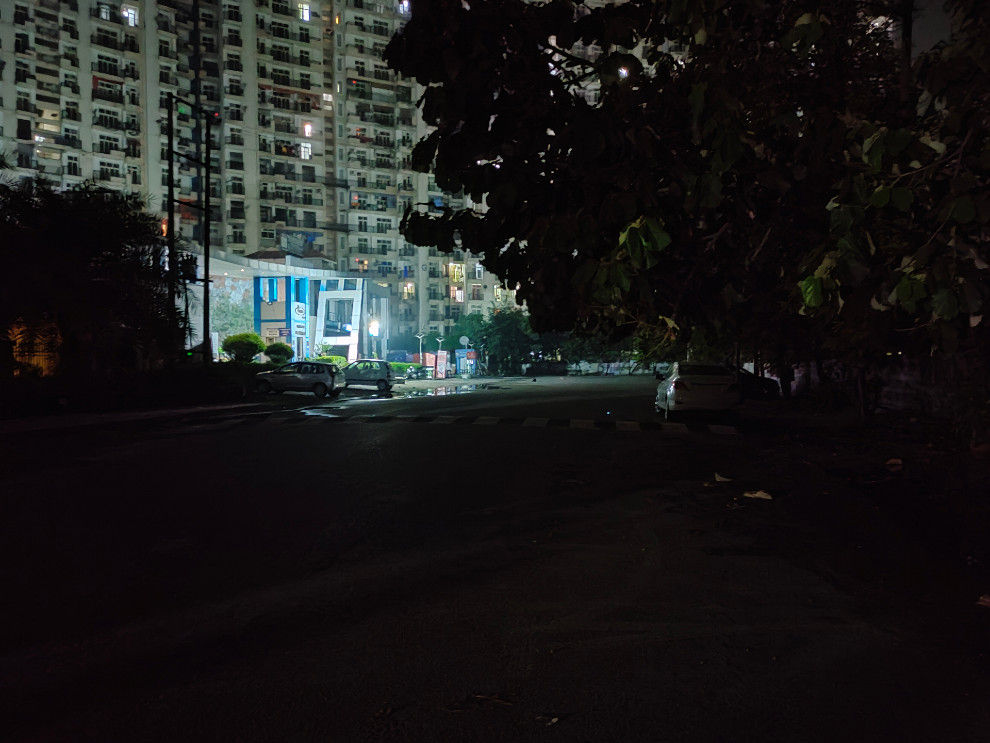 A compromised, but practical and affordable flagship

Looking primarily at the camera capabilities, and the performance under the hood, the Realme X3 SuperZoom seems quite impressive. The hardware choice in the smartphone may come across as a compromise, but it's actually quite practical because of the price tag it carries. It surely doesn't match up to the benchmark scores and gaming quality of Snapdragon 865-powered smartphones, but the difference is barely noticeable. The camera is where the company has focused most of its energy on, and at least on paper, it's loaded with some interesting tech under the hood. Value for money is what we'd call this smartphone after a few days of testing. Sadly, however, the Indian smartphone market, competitive as it is, is unforgiving to devices that cannot offer at least the latest chipset. The Snapdragon 855+ and an LCD display could be how the company kept the prices affordable, but those are exactly the features people are calling out the phone for. It remains to be seen whether Realme will be able to divert the attention from a compromised processor to the cutting edge camera setup and clinch a winner in this segment. Stay tuned for the full review!