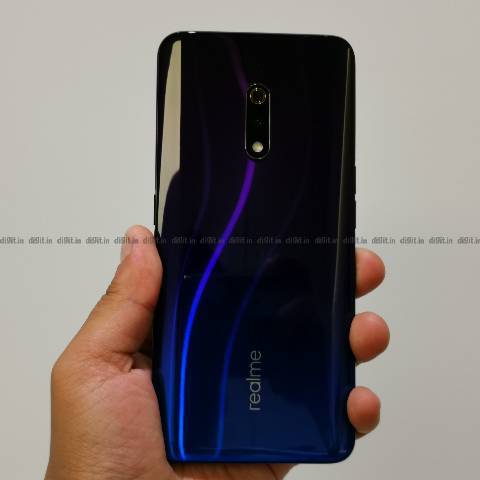 Realme debuted in India last year, as a sub-brand of Oppo. In that same year, the company announced they will operate as an independent brand with Oppo helping Realme to procure components from the supply chain and lending its manufacturing lines to assemble the devices. With a new smartphone every two months or so, Realme soon expanded into other South Asian markets. Yet, despite having a strong Chinese connection, Realme was conspiciously absent from the Chinese market, till yesterday. At an event in Beijing, Realme announced the Realme X(₹ 14999 at amazon) and the Realme X Lite in China. The Realme X Lite is basically a rebranded version of the Realme 3 Pro which launched in India last month. The Realme X, however, has a lot of new things to talk about. I had the phone with me for a few hours after the launch, and here's what I think of it.

Note that this variant of the Realme X is running the Chinese version of ColorOS 6 and features might differ in the global ROM when the phone eventually launches in India. Speaking of which, Madhav Seth, CEO of Realme India, said, the Realme X will indeed launch in India "very soon". 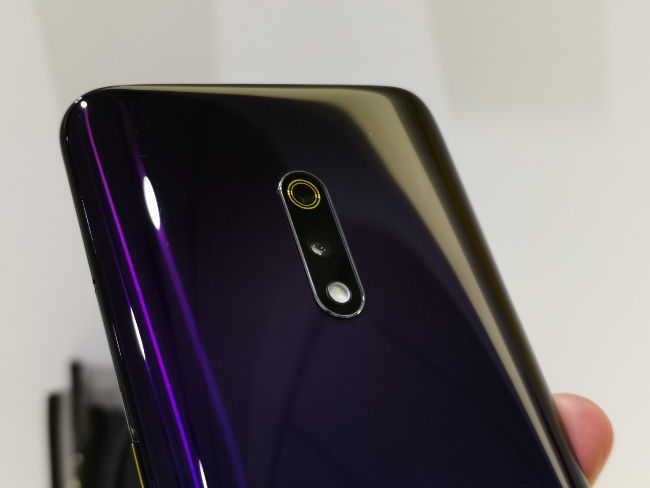 From the back, the Realme X takes a lot of inspiration from the Realme 3 Pro. The blue and purple gradient colour variant we received looked the same as the Realme 3 Pro, with the S-shaped light-trail and the signature yellow ring around the primary camera. It's also made of plastic like the Realme 3 Pro, but from the front, it's a whole new phone. The Realme X is the first phone from the brand to offer an edge-to-edge display. Its 6.3-inch AMOLED panel stretches all the way to the edges, with thin bezels present only at the bottom. This is possible because the 16MP front camera is housed in a pop-up module that stays flush to the body when not in use. Pop-up cameras with bezel-less displays are becoming a desfining trend in 2019 smartphones and it's good to see Realme bring the new design down to the mid-range segment.

The AMOLED display is supplied by Samsung and there's also an optical in-display fingerprint sensor that's supplied by Qualcomm. This is essentially the third smartphone with Qualcomm's tech for authentication, the OnePlus 7 Pro and the Galaxy S10 being the other two. Having used the phone, the fingerprint sensor is fast, but not as fast as the OnePlus 7 Pro and the Galaxy S10. The OnePlus 7 Pro's authentication is the fastest we have seen till date. There's also face unlock assisted by the pop-up camera but that takes around a second to rise up and scan your face. Either way, you will have to wait a good one second to go from the lock-screen to the home-screen.

The Realme X is offered in two standard colour variants. The purple-blue variant that I used, and another white coloured variant. Then there are two special editions inspired by natural textures found on vegetables like onion and garlic. You get straigh-lined patterns on the back which shine when light reflects off of them. 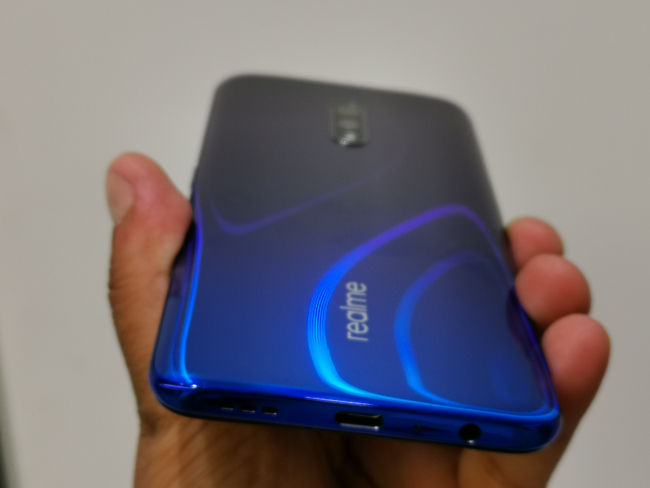 Contrary to earlier leaks, the Realme X is not a flagship smartphone. Earlier leaks claimed the phone will be powered by the Snapdragon 855 smartphone and while the company is apparently working on a device with the flagship chipset in it, this one is powered by the same Snapdragon 710 SoC that's there on the Realme X Lite aka the Realme 3 Pro. So the performance is expected to be more or less similar. While reviewing, we observed the Realme 3 Pro was slower than the Snapdragon 675-powered Xiaomi Redmi Note 7 Pro in benchmark scores, but in real world usage, both phones work just fine without a hitch. The Realme X however offer up to 8GB of RAM and 128GB of storage. The top-end variant will retail for 1799 RMB in China, which approximately coverts to Rs 17,000 in India. The Realme X too felt fairly fast with no visible lag or slow-downs. But then again, it's too early to dish out a verdict based on just a few hours of usage.

On the software side, the Realme X runs on ColorOS 6 based on Android 9 Pie. The software is borrowed from Oppo with minimal customisations. It's much refined from before though, with the icons and animations now looking aesthetically better. The Realme X, however, is missing the SD card slot that's there in almost all other Realme devices. The company claimed this was because there wasn't much space left after the pop-up camera and as a result, expanded storage had to be sacrificed. The pop-up module also meant there wasn't much space for a large battery. So the Realme X settles for a 3,765 mAh battery with support for VOOC 3.0 Flash Charge that can apparently charge up to 60 percent of the battery in an hour.

We will test out the Realme X's performance and battery life when it eventually launches in India, so stay tuned for the review. 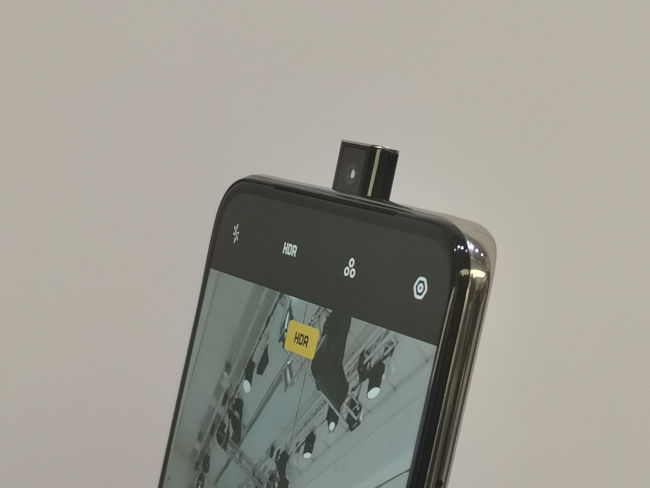 The camera is the biggest reason to buy the phone. There's a 48MP Sony IMX586 sensor on the back along with a depth sensor for portrait photos. The 48MP sensor that's now there on a handful of devices in India has a 1/2" sensor size and can combine four pixels into one to get the effective light sensitivity of large 1.6um pixels. The camera also shoots in 12MP by default, after applying pixel binning. You can however switch to the 48MP mode from the camera settings. The company claimed the 48MP mode can capture more details but we are going to be skeptical after most of the 48MP camera phones we tested failed to bring out the details as promised. Nevertheless, the option is there. The camera can also shoot in RAW and there's a colour-enhancing feature called Chroma Boost which essentially boosts the contrasts and saturation to make photos look more lively. The camera also has a dedicated Night Mode that works by combining multiple shots to get the right exposure and sharpness.

Realme also claims the Realme X can shoot 960fps slo-mo videos, but one video we took wasn't as slowed down as the 960 FPS super slo-mo mode in the Galaxy S10. We'd advise to take this feature with a pinch of salt.

On the front, there's a 16MP front camera with the usual AI beauty enhancement algorithms that smoothens skin, remove blemishes and the likes. 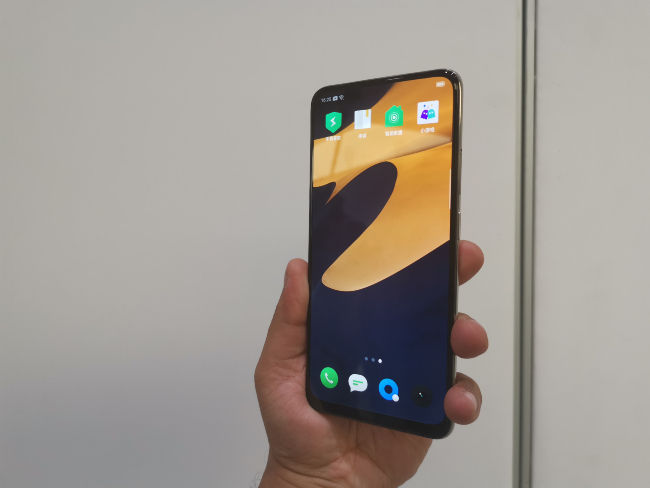 The Realme X combines all the trending features of a 2019 smartphone into an affordable package. Bezel-less display, in-display fingerprint sensor, AMOLED panel, pop-up cameras and even a 48MP rear camera. The only other phones that offer this combination of features are the Vivo V15 Pro, Oppo F11 Pro and the OnePlus 7 Pro, all of them retailing above Rs 25,000 with the new OnePlus flagship starting just shy of Rs 50,000. In that space, the Realme X seems like an attractive proposition. But having a maxed-out set of features is one thing, using them to get a better experience is something else completely and we will be on the lookout for how the phone performs and compares against its peers when it launches in India.

Realme paid for the writer's travel and stay for the launch event in  Beijing, China.