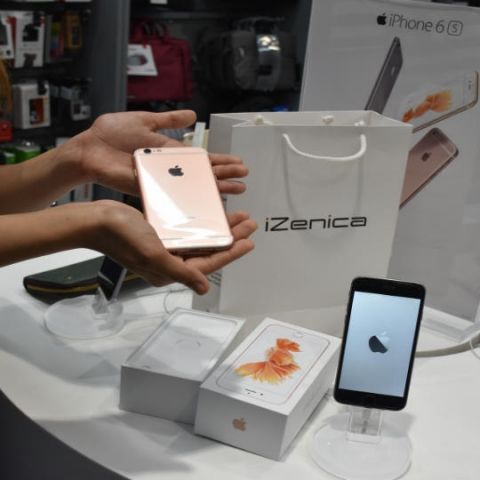 Are you willing to pay ransoms for the new iPhones? The grey market is worth a try. But first, let's consider the pros and cons.

Apple has always been a newsmaker. It was news when the tech giant announced the new iPhone 6s & 6s Plus. Even bigger news, was when Apple managed to set a new record by selling over 13 million handsets, just 3 days after the launch.

All was hunky-dory at Apple, and CEO Tim Cook claimed, “sales for iPhone 6s and iPhone 6s Plus have been phenomenal, blowing past any previous first weekend sales results in Apple’s history." But now, Apple is getting some negative publicity for its low volume of sales in India.

India has never been Apple's most important market, but with smartphone sales booming in our country of 1.2 billion people, the company is sitting up and taking notice. Earlier, it would generally take a few months before Apple products entered the Indian market, but now, the timelines have reduced considerably. Team Digit was present at the midnight release of the iPhone 6s & 6s Plus this year, but the consumer response and enthusiasm was nowhere close to that of last year's launch of the iPhone 6.

Now, there are many theories as to why this happened. Yes, pre-booking figures for the new iPhones were dismal, and the lines outside stores were not long enough, but the real reason for this fall in sales is of course the exorbitant prices. Just consider the price range, between both the iPhones, consumers will end up spending anything from Rs. 62,000 to an eye-watering Rs. 92,000. One could easily put up a down-payment on a car, or even a house on the Greater Noida Expresssway (those who live in Delhi and hear such incessant radio announcements would agree). The iPhone 6s & 6s Plus are at their most expensive in India, but Apple underestimated the ingenuity of Indians when they priced the iPhones this high.

India is a nation of 'jugaad', and when it comes to buying an iPhone, Apple fans in India have deviced many ways of saving themselves the heart/pocket burn. Here are some ways of getting a good deal on the new iPhone 6s and 6s Plus, along with the pros & cons of getting those deals.

You can search online marketplaces and classifieds like OLX and Quikr for some decent discounts on the iPhone 6s and 6s Plus. A search on OLX revealed that the iPhone 6s 16GB (any colour) can be yours for anywhere between 50K - 57K as opposed to the Amazon price of 62K.

There are also some sellers selling the iPhone 6s 64GB model for as low as 52k. As far as the iPhone 6s Plus is concerned, some dealers on Quikr are selling the 64GB version of the device at a discount of 5-10k, coming in anywhere between 70-75k. The price of the same iPhone 6s Plus 64GB on Amazon is Rs 82,000. Interestingly enough, Quikr also has some listings for clones of the iPhone 6s and 6s Plus going for as cheap as Rs. 8,000. Question is – how eager are you to flaunt an iPhone?

- Discounts of up to Rs. 10,000
- Ease of access of the deal
- Can be coupled with third-party insurances, if seller provides a bill

Most of you have forgotten about eBay.in since the likes of Flipkart and Amazon took over your shopping lists. eBay too has some good deals on the iPhone 6s and 6s Plus. A search on the website gave out prices for the iPhone 6s 16GB model starting from 52K going up to 57K. The iPhone 6s Plus 128GB is also up for grabs for approximately 80K. That is a sizeable discount of about Rs. 12,000.

Every city has that special place where you get cheap gadgets. For Delhi, it's Gaffar Market. For Kolkata, it's Fancy Market, and for the Mumbaikars, it's Heera Panna. These markets are famous for their grey (read: illegal) goods imported from countries like U.S., Canada, Hong Kong and China, where prices of Apple products are significantly cheaper. The new iPhones can also be easily spotted in these markets. We spoke to one such dealer, and got some great price quotes for the iPhone 6s and 6s Plus. The iPhone 6s 16GB version can be bought from these grey market shops for as low as 49K. The best deals are on the iPhone 6s Plus because, according to these dealers, people prefer to buy the iPhone 6s for its smaller display. Hence, the iPhone 6s Plus can be bought at discounts upto 15K!

So, it's time to go pick up that new iPhone, but extra caution is always advised while doing so. Write to us about your experiences of picking up a device from the Grey market in our comments section below.