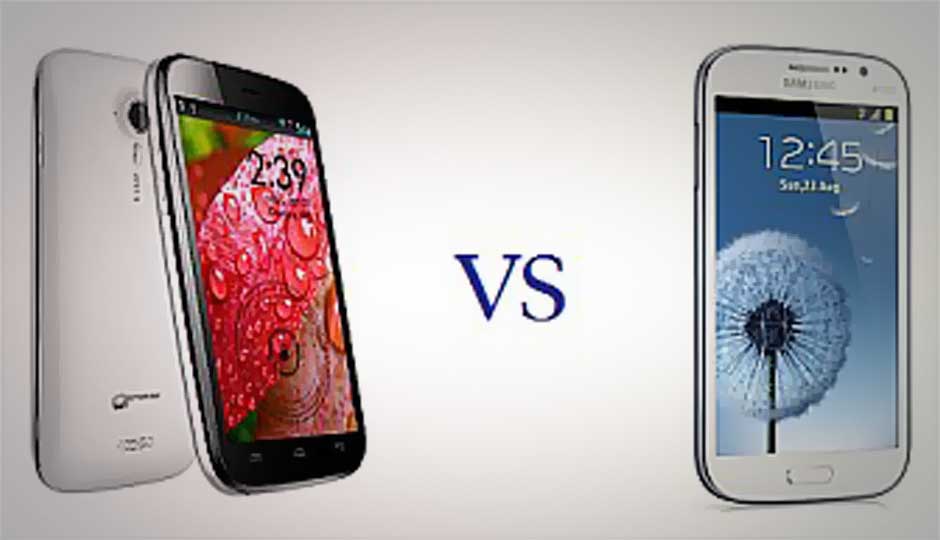 Samsung, the pioneer of the phablets, and Micromax one of the leading brands in budget smartphones, have added two 5-inch phablets in their portfolio.

Even though there is a Rs. 5,000 difference in the two devices we thought we’d take a quick look at the power under the hood of these phablets.

On paper both the Samsung Galaxy Grand I9082 and Micromax A116 Canvas HD seem impressive. We have had some hands on time with both the phones and we have to say, they perform well.

Let us take a look at the specifications of both the phones side by side.

The processor is where we would really like to put these devices through their paces. The A116 has a MediaTek MT 6589 quad-core 1.2GHz processor where as the Grand has a dual-core 1.2GHz processor. The Grand is rumoured to run on the Broadcom SoC, the same one that is powering the recently launched Samsung Galaxy S II Plus. Both the companies have large claims for what their devices can do and we would really like to put their claim to the test. The RAM and battery along with the rear camera of both is the same.

The Galaxy Grand Duos comes with TouchWiz, which is one of the better skins for Android available in the market. The Micromax A116 too has a skin but it quite minimalistic and similar to what we have come to know from the Micromax Canvas 2 A110.

How To Eject Water From Your iPhone Or Android Phone?
The Evolution Of Smartphone Camera Photography In India
Samsung 200MP Camera Sensor Announced With Industry’s Smallest 0.56μm pixels
How To Reset Samsung Phone: A Step By Step Guide
Poco F4 and Poco X4 GT Launch with 64MP Camera, 67W Charging, And Android 12
Advertisements