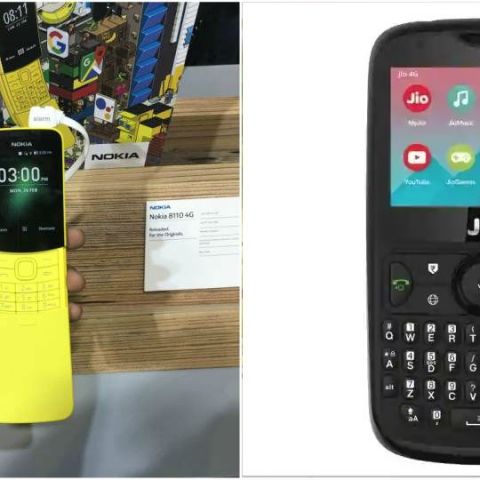 While the world was taken aback by the reloaded Nokia 8110 'Banana' phone, Indians had a sense of Déjà vu thanks to the JioPhone and JioPhone 2.

HMD Global seems to have made a habit of reincarnating phones from Nokia’s heyday. They started it off with the Nokia 3310 last year which was followed by the 4G variant of the same. Today, HMD Global launched the famous ‘Banana Phone’ that was first introduced at MWC in February. The device was popularised by Keanu Reeves in the Matrix movie. Now, even though the design of the phone has pretty much remained the same, with the required refinements of course, it’s smarter than before. In fact, it’s smarter than last year’s Nokia 3310 as well.

The Nokia 8110 isn’t just a barebones feature phone. It supports 4G VoLTE for calling and comes with its own app store with access to Google Assistant, Facebook, Google Maps, Twitter and the likes. There’s support for emails which sync over your Google account and there’s even a new version of Snake.

However, while people across the world sat up and took notice of a ‘smart feature phone’, people in India had a sense of Déjà vu. That’s because last year’s JioPhone came out with the exact same set of features and later, even got support for Google Assistant.

With the Nokia 8110 4G(₹ 4799 at amazon) finally in India, the JioPhone and JioPhone 2, which basically have the same specs, will be up for some competition. It might be difficult for the legendary Nokia phone to beat the popular JioPhone in terms of its pricing, as the JioPhone is effectively free of cost. The JioPhone 2, on the other hand, is priced at Rs 2,999. In comparison, the Nokia 8110 4G comes with an iconic design and Nokia’s sturdy craftsmanship at Rs 5,999.

Price and cellular nostalgia apart, are the two phones really any different? We find out.

The Nokia 8110 4G is powered by a 1.1Ghz dual-core Qualcomm 205 mobile processor along with 512MB of RAM and 4GB of internal storage. There is also a microSD slot to expand the memory along with a 2-megapixel camera at the back and a 1,500mAh battery. HMD Global claims the Banana phone can last up to 25 hours on standby and deliver a talk time of 9.32 hours on a 4G VoLTE connection.

The Reliance JioPhone, JioPhone 2 are powered by a 1GHz Dual-core processor Qualcomm 205 mobile processor coupled with 512MB of RAM and 4GB of internal storage, which is again expandable via a microSD card, same as the Nokia 8110 4G. On the back is a 2-megapixel camera and it also has a 0.3-megapixel front camera, which is not present in the Banana phone. The JioPhones also have a larger battery of 2,000mAh capacity that delivers upto 48 hours of battery life. Neither of the two phones can deliver a week-long battery life like other feature phones simply because there’s no so much happening inside.

While the hardware on both the phones are more or less the same, how they utilise it is quite different. Both the Nokia 8110 4G and the JioPhones are powered by KaiOS which is a fork of Firefox OS. The Banana Phone, however, comes with its own app store that allows you to use Facebook, Twitter, Google Maps, Google Assistant and even a revamped version of Snake. The Nokia 8110 4G is more open to third-party apps in this case. It remains to be whether WhatsApp will be made available to the phone, since HMD has promised more apps will be added later.

One advantage of the JioPhone is that it allows you to pay using JioMoney. There’s no support for a payment app on the Nokia 8110, yet. However, the Nokia 8110 takes the lead by allowing users to turn the phone into a Wi-Fi hotspot, something that Jio has abstained from giving. In Jio’s defense, the JioPhone can be paired to a TV using a cable to enjoy content on the big screen.

The Nokia 8110 wins hands down simply for its iconic design. Lovingly called the Banana phone, the Nokia 8110 is curved from the back and features a slider that covers the keyboard. Twenty years back when the phone was launched, it was highly sought after, especially after it became the ‘Matrix’ phone as well. You press a button to open the slider and answer a call. How cool is that? Add to that a bright ‘Banana Yellow’ colour variant and the classic Black variant, and we have a clear winner in our hands.

The JioPhone, on the other hand, looks more like a conventional feature phone. If not for the app-driven smartness inside, this could very well have been just another feature phone. The phone has the older T9 keyboard with more options crammed into it than ever and is quite thick. The phone is quite durable though.

There’s also added advantage of being on Jio’s network. The JioPhone 1 is practically free of cost with an initial payment of Rs 1,500 which after following some terms and conditions will be refunded back to the users after three years. The JioPhone 2 is priced at Rs 2,999 with no refunds. You essentially have to keep recharging the JioPhone 1 for three years and receive a full refund after the stipulated period of time.

The Nokia 8110 4G’s price in India is Rs 5,999, which is a disappointment. In Europe, HMD said the phone will be priced at EUR 79 which roughly converts to Rs 6,300. However, in India, one can buy a Xiaomi Redmi 6A starting at Rs 5,999. This is too high a price for India since entry-level Android phones can be bought at the same price. However, it is impractical to expect the Nokia 8110 4G to be prices similar to the JioPhone or JioPhone 2, given the design and the branding. 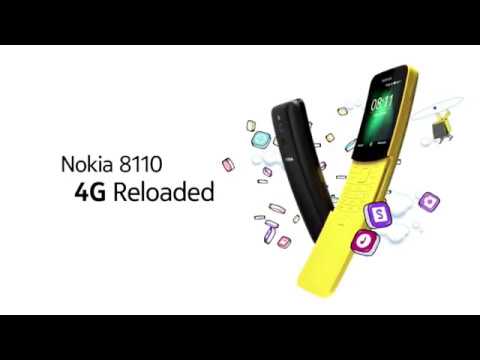