Moto E5 Plus first impressions: Premium design on a budget 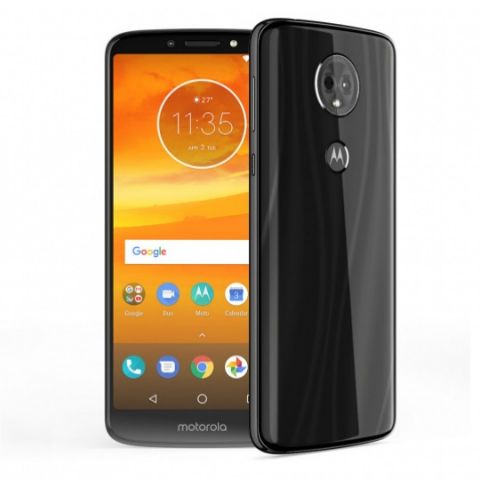 The Moto E5 Plus looks a lot like its more expensive siblings and packs a massive 5,000mAh battery, but with an aged processor underneath, will it be able to match its rivals?

The Moto E5 Plus that launched today for Rs 11,999 can easily be called out as the Moto G6 if you’re not looking closely. At least I did at first glance. It has a similar 18:9 aspect ratio display, a shiny new body and a lot of other things common with its more expensive sibling. But then I looked closer and the differences started to become clearer. That’s not glass the Moto E5 Plus is made out of, it’s plastic shined to a point where it gives off that signature S-shaped shine Moto has developed. The display has increased in size, but the resolution has remained the same as its predecessor at 720p. The watch-dial shaped camera unit is the best disguise. It’s easy to think there’s a dual camera but actually, it’s a single camera and a Laser AF unit. Everything that gave the Moto G6 it’s refreshed new look is there in the Moto E5 Plus.

The Moto E series has always maintained a parity in design with its elder siblings and this time, things are no different. Only, the materials used to achieve the design philosophy are different. It’s a lot bulkier and thicker than most phones and I’m presuming that’s because of the massive 5,000mAh battery it packs inside. That added with the 6-inch taller display makes it a little difficult to use the phone with one hand. The extra real estate on the display lowers the pixel density to 268ppi, which does lead to a slightly less sharp display. However, the UI seems bright and vibrant.

Hardware under the hood

The Moto E5 Plus is powered by the Snapdragon 430 chipset. The same chipset powered by the Moto G5S and the Nokia 6 and 5 last year, and the Lenovo K6 the year before. Seemingly, there’s no real upgrade in performance. The entry-level octa-core chipset is clocked at 1.4GHz. Interestingly, the chipset has been frequently used to power phones with near-stock Android interface. You get up to 3GB RAM and 32GB storage with the phone which is again expandable up to 256GB.

The Moto E5 Plus runs on the near-stock Android interface that’s there in all Moto phones. The launcher and the icons are all stock Android 8.0 Oreo. You get an app drawer and the option to group icons into folders. There’s very little bloatware inside. Moto’s suite of productivity enhancing features like the Moto Display and Moto Actions are there, although quite restricted. You won’t get the popular twist to launch camera action or the chop to turn to flashlight action. The Moto voice assistant is also missing. You do get the ambient display though that discreetly lights up the screen if you get a notification. I noticed that despite having an IPS LCD display of 720p resolution, the black levels in the ambient display are almost the same as that on an AMOLED panel.

At the back, you get a 12-megapixel sensor with 1.25um pixel pitch. There is also PDAF and laser AF complimenting a lens with an f/2.0 aperture. The camera interface is also quite familiar for a Moto user and options like Pro Mode, Slow Motion, Panorama, etc. are stacked in a hamburger menu near the shutter. On the front, you get a five-megapixel shooter with a LED flash. I didn’t have the time to test out the camera of the phone for the little time I had it with me, but it surely looks promising.

Suspiciously  missing is a dedicated speaker grill on the body. I fumbled around the edges of the phone till I figured out the speaker is actually the same as the earpiece housed on top of the display. It’s too early to say whether the implementation works but it certainly won’t come in the way when you hold the phone in landscape orientation.

The biggest feature (quite literally) of the phone is its 5,000mAh battery. That, combined with a near-stock Android interface and a 720p display is bound to deliver battery life enough to last a day or more. On top of that, you get the 18W TurboCharger in the box that Moto claims will give you six hours of charge in 15 minutes.

The Moto E5 Plus will be available in two colour variants. Considering it’s priced at Rs 11,999, it’s immediate competition is the Redmi 5, Redmi Y2 and the Redmi Note 5. Considering the Moto E5 Plus will be available more easily than Xiaomi devices that have the notoriety of going out of stock in seconds, the phone stands a good chance to bring users back to Moto, provided that the phone is able to deliver on all counts.