Micromax Bharat 1 First Look: Yet another competitor for the JioPhone 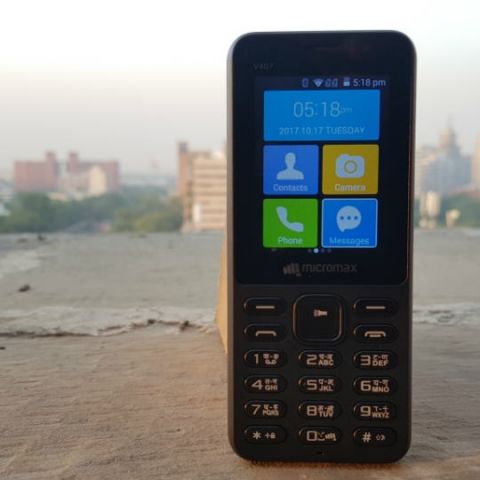 With the launch of Reliance Jio’s JioPhone, the feature phone market has suddenly gained a lot of interest. What’s also evident is that Jio’s competitors aren’t keeping quiet. Airtel announced a cheap 4G VoLTE smartphone recently, partnering with Karbonn, and now it’s government run BSNL’s turn. The telco has tied up with the largest Indian phone maker, to launch the Micromax Bharat 1. It comes with a BSNL SIM bundled inside, and users can pay Rs. 97 per month to get unlimited calling, data and SMS services. It’s unclear what the FUPs will be like, but you can expect a daily FUP here for sure.

The Micromax Bharat 1 brings most of the feature that the JioPhone does, barring Jio’s voice assistant. There’s a built in YouTube app on the device, along with a “Micromax Entertainment” application, that just shows up as “Fun” on the device. The app gives you access to Live TV, Music, Movies and Videos. The best part? It’s all free to use, meaning you don’t have to pay anything extra for these services. The Bharat 1 is priced at Rs. 2200, but its effective cost for a year comes to Rs. 3364, when bundled with BSNL’s plan. It will be available in retail stores from October 20. 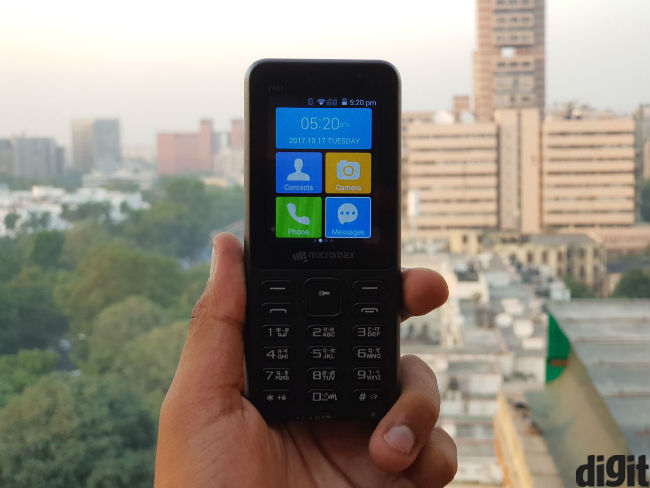 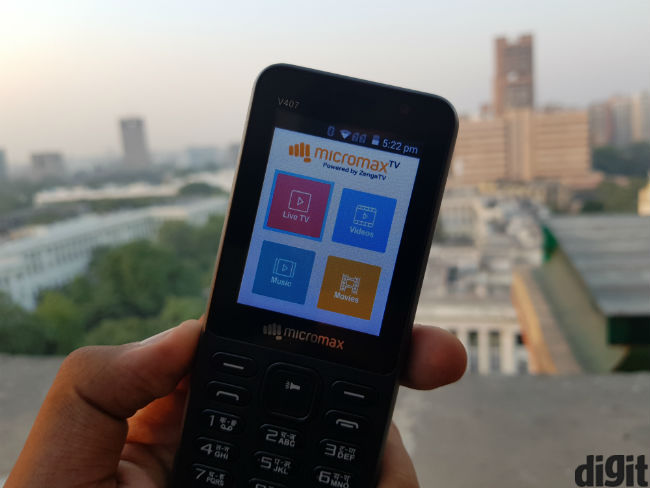 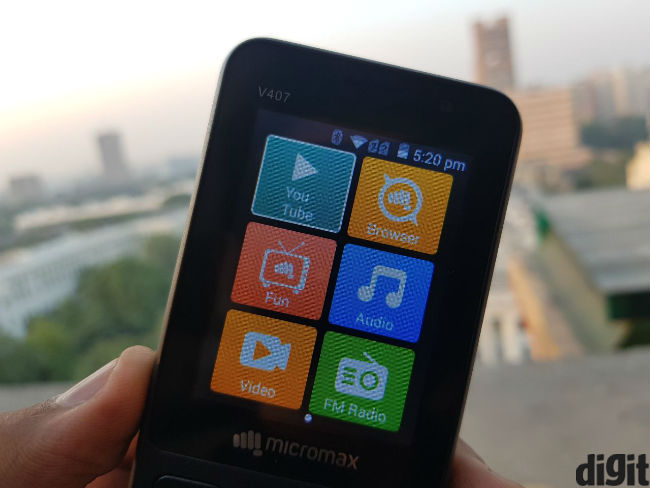 The phone is also free of operator locks. So, you can use it to a SIM from any other operator if you wish to. Of course, in doing so you will forego BSNL’s offer for this device. In Tier II and III markets, that may very well be the wrong choice, since BSNL indeed has impressive coverage in the remote areas of the country.

I’ve used the JioPhone for less than an hour, and I’ve used the Micromax Bharat 1 for a similar time frame. The two phones look identical in some ways and there specs match as well. The Bharat 1 runs on the Snapdragon 205 chipset from Qualcomm and it has 512MB of RAM. There’s also 4GB storage inside, alongside 2MP and VGA camera on the back and front, respectively. There’s a 2.4 inch QVGA display, just like the JioPhone. If anyone in the feature phone market was comparing specs, these phones would be identical.

Micromax’s interface is different though. In fact, with its colourful UI and square icons, the software looks quite similar to the Android interface on the erstwhile Nokia X. It works for a feature phone of course, with four home screens to add apps to. The phone doesn’t support WhatsApp or Facebook at the moment, but it does run on a forked version of Android only. The demo devices at launch didn’t have any App Store on them, but Micromax confirms that the Play Store will be available on devices that are shipped. That’s a major difference between the Bharat 1 and the JioPhone. While the JioPhone simply gives you hopes of widespread app support, Google’s Play Store is already populated, and a lot of apps tend to work on forked versions of Android. The question is whether a broken app experience is better than no apps. 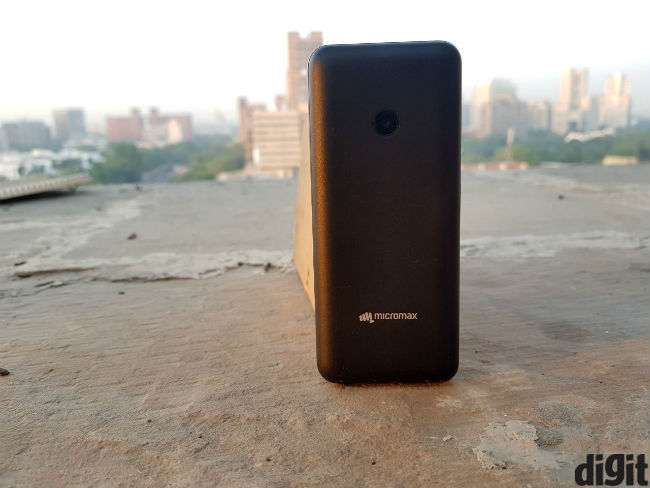 It’s unlikely that either of these phones will support lots of apps. In fact, it’s surprising that Micromax couldn’t weave in WhatsApp support on an Android phone. If the company can exploit the Android platform in future, the Bharat 1 will have a big edge over the JioPhone, as far as smarts are concerned. Currently though, the two are essentially similar in terms of their software platforms.

Micromax gets a slight edge over the JioPhone with another feature though. The Bharat 1 supports hotspot out of the box, which seems to be an important feature for prospective users. How long Micromax has this advantage will depend on how long it takes Jio to bring hotspot support on the JioPhone. The company had earlier confirmed that the feature will be coming to the JioPhone in future. 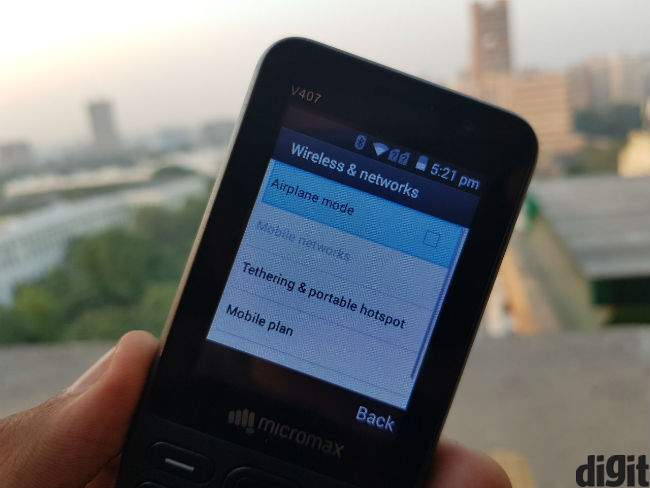 Barring these two dissimilarities, the Bharat 1 and JioPhone are 4G VoLTE feature phones that can cancel each other out. Pricing seems to be the only criteria involved in making the buying decision. Beyond that, a BSNL user would very obviously prefer the the Bharat 1 over the JioPhone. Also, Tier II/III users on Airtel or Vodafone’s networks have another 4G VoLTE feature phone to choose from.

You’re probably wondering why I haven’t mentioned Jio’s TV cable yet. That’s because the cable feels like a gimmick in the feature phone market. It’s certainly a useful gimmick, but selling the cable separately makes it an aspirational buy. Granted that this market is full of aspirational buyers, but both the Micromax Bharat 1 and JioPhone are value-focused devices too. Supporting the Cable makes the JioPhone the more technologically advanced device, but that may not hold the weight we think it does, in practical scenarios. 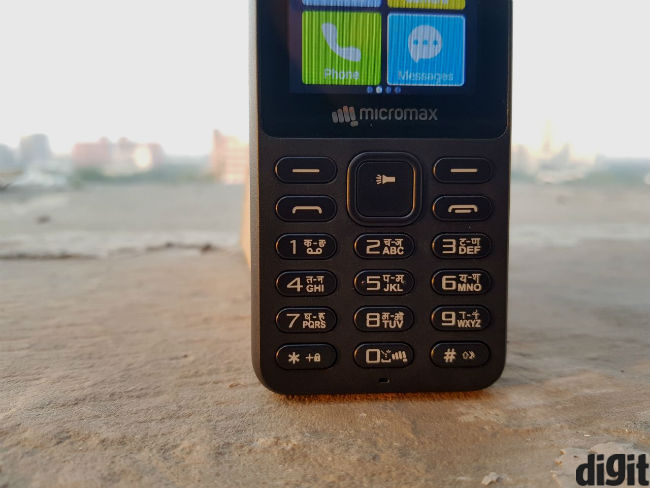 Should I buy it?

There’s little to differentiate the Bharat 1 from the JioPhone. If you think the JioPhone is good, I see no reason to discard the Micromax Bharat 1. In fact, when it comes to making phones, Micromax may in fact have larger brand value than Jio does.

These phones are both meant to elevate even the most basic data users in the country to 4G and VoLTE services. It’s like I said for the JioPhone in an earlier story, it’s a precursor to your first smartphone. The Micromax Bharat 1 is for that same purpose.

Samsung Galaxy A12 vs Micromax In Note 1: Pricing and Specifications Compared
MediaTek Dimensity 1200 SoC launched in India, will be first seen on a Realme smartphone
Realme C25 first impressions: Looks solid for the price
Samsung and MediaTek collaborating to bring the world’s first WiFi 6E 8K TV in 2021
A quick look at what makes OPPO F19 so cool!
Advertisements