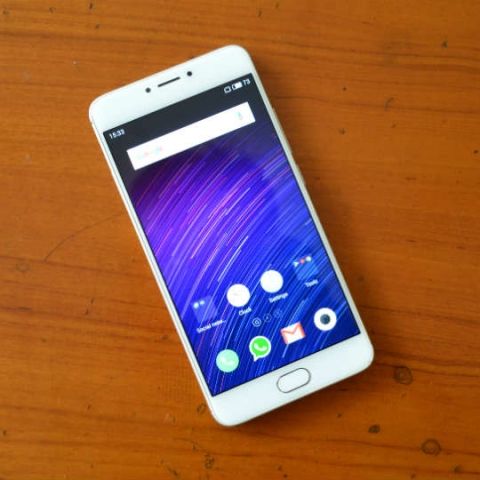 Verdict: The Meizu M3 Note is not the best to phone in the sub-10k category but it makes a good case for itself.

I saw the Meizu M3 Note for the first time when I visited Beijing, a few months back. In the short while I spent with it, there was a feeling that this device may turn out to be one of the best smartphones under the Rs. 10,000 price tag. Featuring a large battery pack, a new octa-core processor, fingerprint scanner, 32GB of storage and more, the Meizu M3 Note is quite the feature-packed device. Additionally, it is priced very competitively at Rs. 9,999. But, then again, many of the sub-10k smartphones launched of late come with impressive specifications. After using the phone for over a week, while the Meizu M3 Note turned out to be quite good, it is not the best device around. 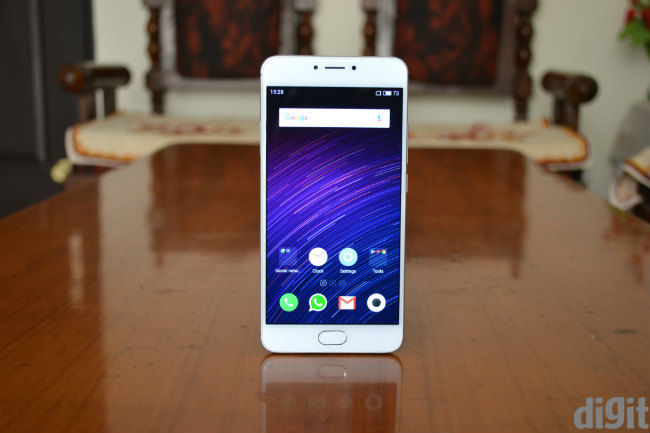 NOTE: This review is based upon a 2GB RAM variant of the Meizu M3 Note with 16GB of storage, instead of the 3GB RAM, 32GB storage variant that the company currently sells in India. We will update our review as we get our hands on the 3GB RAM variant.

If you have previously seen Meizu smartphones, you would know that Meizu likes to keep its designs simple and similar across all price points. While the M3 Note looks different from last year’s M2 Note, the phone shares its design cues with the last year’s MX5. The biggest upgrade from last year’s M2 Note is the all metal construction. While the top and bottom sections are plastic to give breathing space to antennas, Meizu has insured that the metal and plastic bits do not look out of sync, at least out of the box. However, rough usage may wear out the polish on the top and bottom plastic section faster. 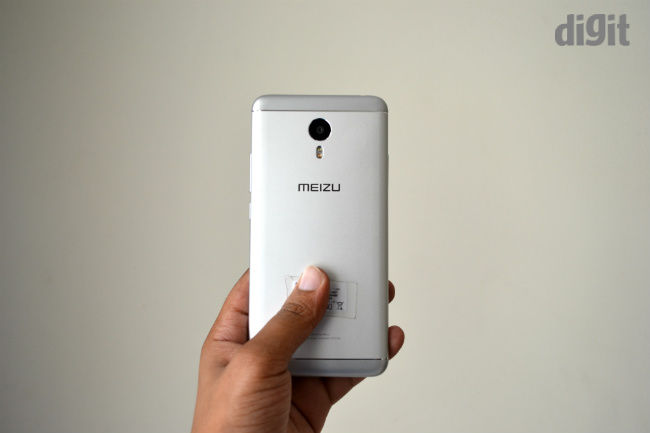 Being a 5.5-inch device, though, the Meizu M3 Note is not that ergonomic. The rounded edges and the 2.5D curved glass attempt to provide ample grip. The quality of material used and the tactility of the physical buttons is the best in the category. The single physical home-and-back button also works as a fingerprint scanner, which is accurate for the most part. The implementation, though, takes some time to get used to. The integrated button goes back on one tap, switches to Home on press, and this mode of usage takes a while to get used to. 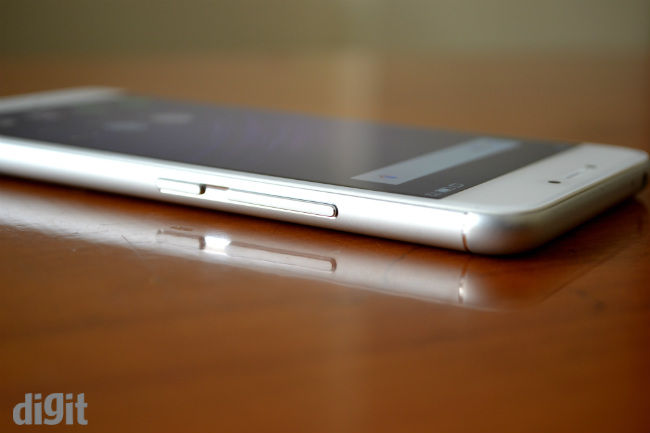 The Meizu M3 Note boasts of a 1080p LTPS display. The 5.5-inch display produces vibrant colours, has one of the best viewing angles in its segment, but loses out because of the overall dim brightness. Even though the display looks bright enough when you are indoors, it seemed somewhat dim under direct sunlight. The touch response is good, and so is the new 2.5D curved glass, adding a nice, premium touch to the sub-10k smartphone segment. 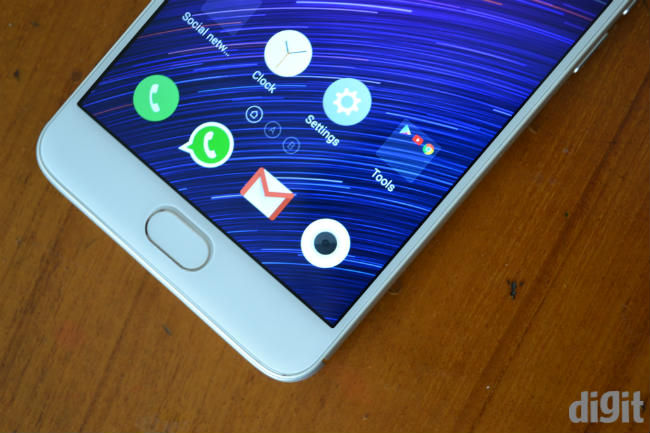 The new UI on the phone looks familiar and much simpler to what was being used on previous generation Meizu smartphones. The new Flyme OS 5.1 now offers a simpler interface, and Meizu has further simplified the settings menu as well. UI customisations are kept minimal and in tune with the original Android Lollipop design, like the card-style Recents menu or the single-page Settings menu. Although Meizu has skipped over an app drawer, the arrangement of apps on the Home screen makes everything easy and simple to access. All app shortcuts are placed on multiple home screen panels, and Flyme OS 5.1 tries to imitate iOS in smaller details like renaming a folder to ‘Social’ when messaging apps are grouped into a folder. This, essentially, is a good implementation. There are themes as well, but not many that you would have already seen or used. Another addition that some people may find useful is the SmartTouch knob, which is like a virtual jog dial, something like what we have seen on Lenovo’s Thinkpad notepads. This jog dial can be further customised with user preferences like putting various options on each dial. 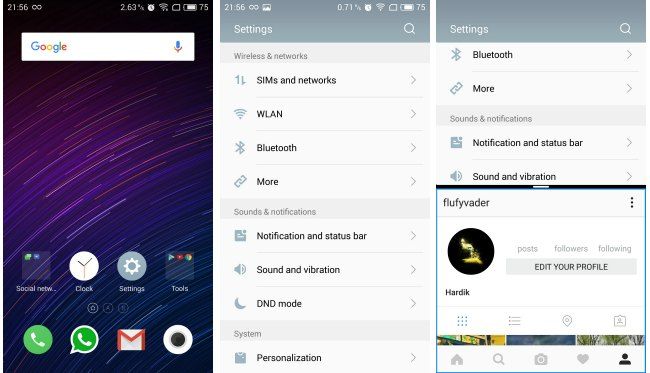 Meizu claimed to have worked with MediaTek for over six months to optimise the Helio P10 processor so that it performs seamlessly, and it does so, unless you heavily tax it. So, unless you play heavy games on the M3 Note, you should not face too many stutters. Regular apps such as Facebook, WhatsApp, Video Player or photo editing apps do not face any lags on the overall performance of the smartphone. Soon as I tried to run Asphalt 8 on it, the game started lagging majorly. The MediaTek Helio P10 SoC is not powerful enough to handle demanding gaming titles, which is not a good news for heavy mobile gamers. The same is reflected in the Yu Yunicorn, which employs the same SoC. However, if you just want to play some casual games such as Skyforce or Alto’s Adventure, you’ll find the performance enough. The synthetic benchmarks aptly reflect on how the smartphone lags in graphical performance. 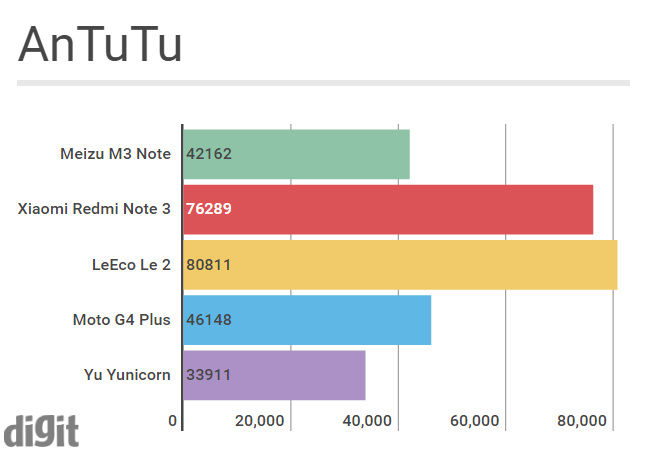 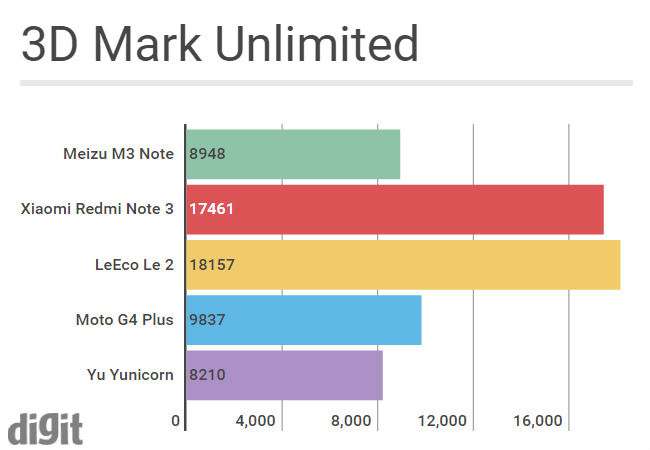 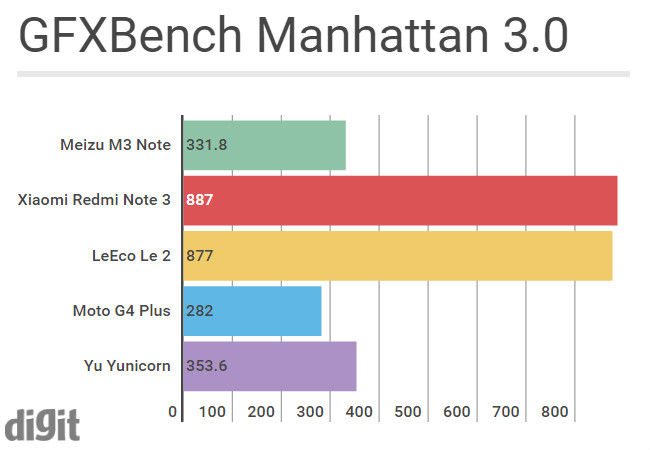 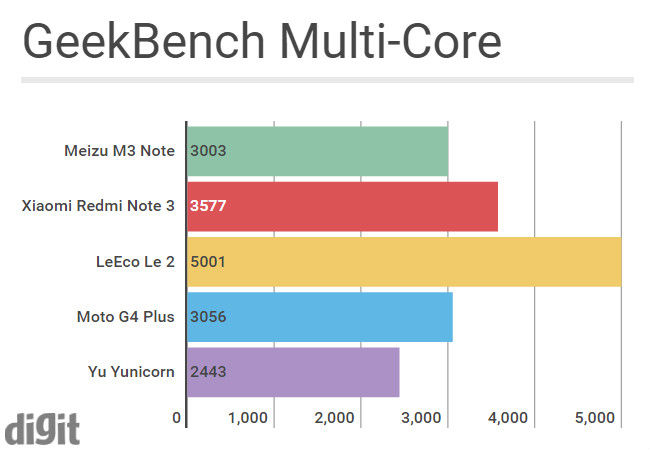 Audio quality is decent on the smartphone via its inbuilt speaker. Plugging in a headphone jack offers a similar sound output. Needless to say, this is not meant for audiophiles. Further, the low volume of the smartphone can be a minor issue.

Using the smartphone as a daily driver, we could easily get almost two days of usage from the device, without any gaming. My day includes about 45 minutes of calling, four hours of music streaming, one hour of Netflix and frequent WhatsApp and Facebook. With at least half an hour of gaming included, the M3 Note’s battery life dropped to a day and half, which, considering the price point, is not bad. It also gives tough competition to the present favourite smartphone, the Xiaomi Redmi Note 3.

The primary camera in the Meizu M3 Note, much like its display, lacks finesse. The 13MP rear image sensor is capable enough to take decent photographs in normal daylight. It focuses softly, and the photographs showcase visible noise levels and lack sharp details. It fares better when it manages to focus, which, to be fair, it does more often than not. The camera app itself is quite intuitive, responsive and simple to use. Low light photography is not as bad as a majority of phones out there in the sub-10k segment, but neither is it a very good one. However, the LeEco Le 2, which is about Rs. 2,000 more expensive, offers a better 13MP camera if you can afford the extra dough. The front-facing camera is decent at best, under normal bright light.

The Meizu M3 Note is a good smartphone to consider, only if your budget is limited to Rs. 10,000. The smartphone offers all the essential that a budget customer would require - a good display, superior battery life, decent performance and a workable camera. Meizu had the opportunity to be the best, but does not manage to overhaul the Xiaomi Redmi Note 3 under Rs. 10,000. Overall, it is a good phone to buy in the sub-10k budget category, only if you would not like to go for the 2GB variant of the Xiaomi Redmi Note 3.