The Honor 9X launched in India last week starting Rs 13,999, marking Honor’s re-entry into the India market after being out of action for most of 2019. The Honor 9X is also the last Honor smartphone to come loaded with Google’s suite of apps ever since the United States administration imposed a trade ban imposed on Huawei. Interestingly, the Honor 9X lands quite a few months after it started selling in China, and there was some apprehension that the smartphone wouldn’t be able to keep up with the current bestsellers. That the performance won’t be good enough to bring back the momentum Honor was enjoying in India before the whole trade-ban debacle.

Yet, the Honor 9X comes with quite a few features that are still as relevant as before. The 48MP triple camera setup, at least on paper, seems like a good option in the mid-range segment, while the pop-up selfie camera allows the 6.59-inch LCD display to stretch all the way to its edges. The camera and the form factor of the Honor 9X are still the de facto trend in the mid-range and high-end segments, although the new breed of budget smartphones of 2020 should bring something new.

While the features are still relevant enough on paper, it’s the performance of the Honor 9X that should really be the concern. Can the Kirin 710 still hold up against the likes of the MediaTek Helio G90T or the Snapdragon 712? Weirdly enough, we noticed the Honor 9X comes with the Kirin 710F and not the Kirin 710 we saw in the Honor 8X and the Honor 10 Lite before. Has anything changed? We spoke to folks at Honor and they said there really isn’t any major difference between the two chips that are worth talking about.

The Kirin 710F and Kirin 710 are identical in the way they perform. There isn’t any change in the core clock speeds, or the GPU clock speed or even the cache memory. Instead, the Honor official said the new chip has some minor architectural changes due to which HiSilicon, the silicon manufacturer for Huawei, had to file for a new model number. Specifically, the Kirin 710F is the same chipset as the Kirin 710, but it implements a ‘Flip Chip’ package, a method of chip manufacturing that allows room for more transistors without increasing the actual size of the chip. Despite that, the number of transistors on the 710F are the same as the Kirin 710, so if you were hoping for a performance boost in the Honor 9X because of a ‘new’ CPU, that’s not happening.

Instead, Honor opened up a lot of bottlenecks that held back the Honor 8X and the Honor 10 Lite last year. The Honor 9X come with LPDDR4X RAM and UFS 2.1 storage. These are two major upgrades over the previous Honor smartphones, something that should go a long way in improving app loading times, and make using the phone generally faster. Indeed, we did see a big jump in benchmark numbers as compared to the Honor 8X. Interestingly, the benchmark results of the Honor 9X were quite close to the present competition. You can see the results of the three major benchmarks right below yourself —

What do the benchmarks say? 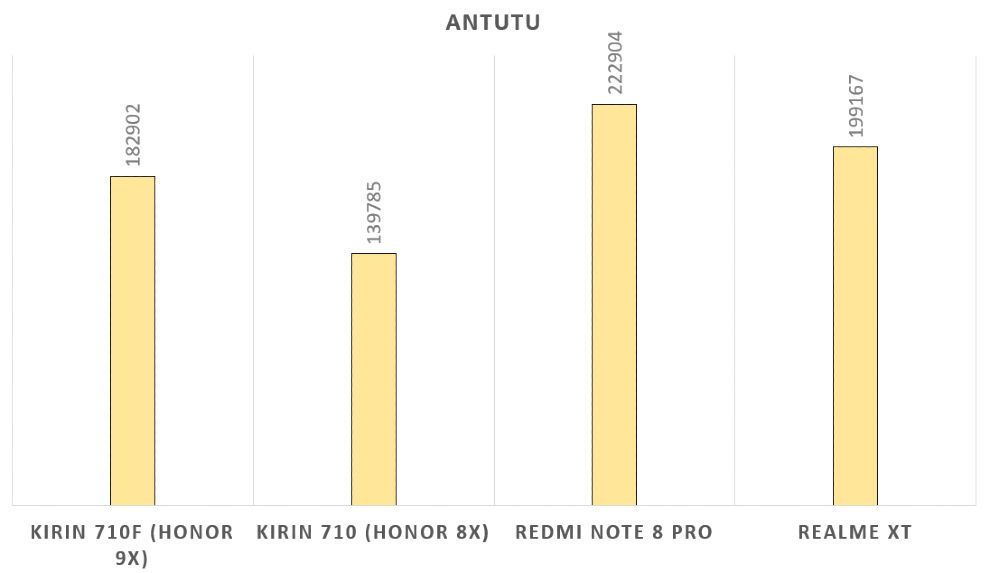 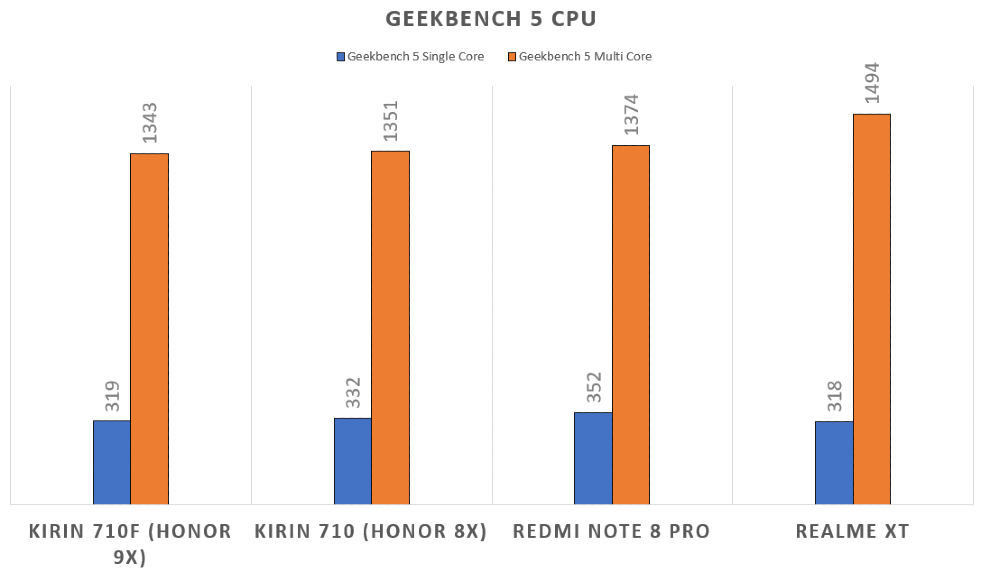 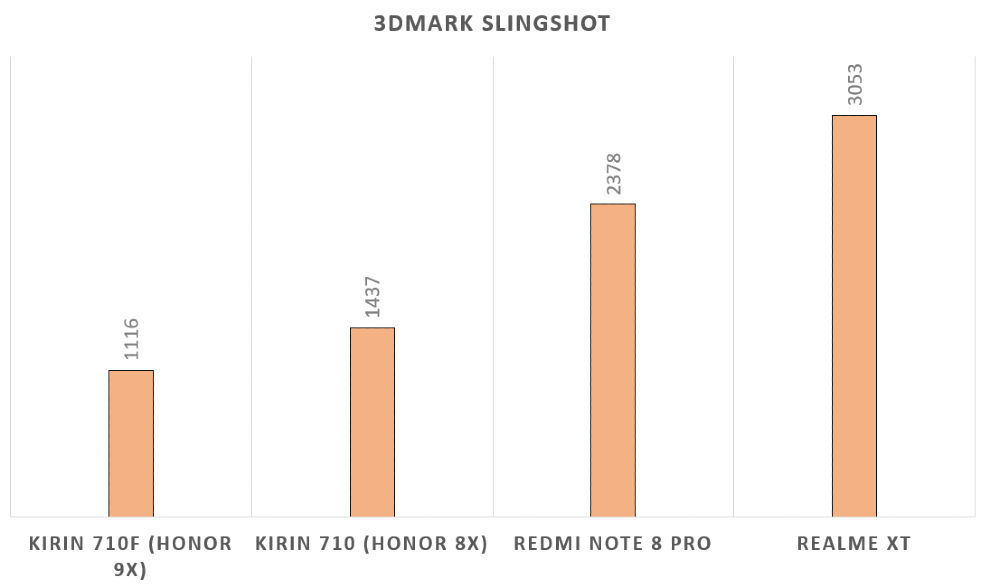 On AnTuTu, the Honor 9X is far higher than the previous Honor 8X (despite sporting the same SoC) and while the Note 8 Pro proves to be no match for it, it’s actually quite close to the Snapdragon 712-powered Realme XT.

Geekbench numbers are even more interesting. The Honor 9X manages to keep up with all the phones in its competition bracket, in both single-core and mult-core performance. That’s quite something from a chipset that’s now more than a year old.

However, 3DMark Slingshot scores, which indicates GPU performance, still lags far behind. It proved to be even lower than the Honor 8X from last year, and we noticed a wide gap between GPUs on the Redmi Note 8 Pro and the Realme XT.  We are presuming this is without GPU Turbo 3.0 turned on.

Now, this is just a synthetic measure of performance for the Honor 9X, and on the three major benchmark apps, the Honor 9X doesn’t lag behind by as much as I thought it would. The wide difference in numbers between the Honor 8X and the Honor 9X could be attributed to the faster RAM and storage modules, along with some more optimisations that Honor must have put in place.

We will continue testing the Honor 9X for more insights. Do stay tuned to Digit.in for the full review.