Humans are dangerous for smartphones! 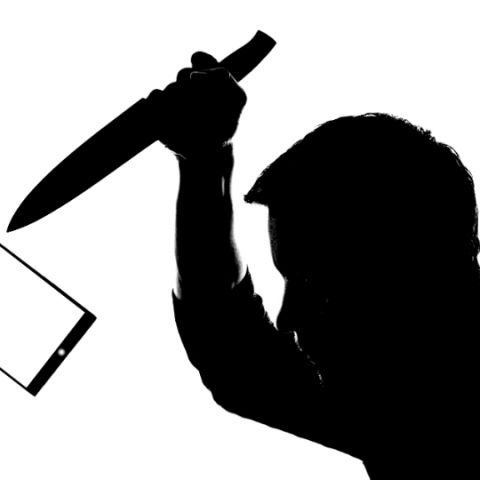 I was on my way to meet a friend. It was a Saturday night, we had plans to party, and I had made it a point that my iPhone 6 was wearing a matching black cover as my dress (Us girls do these kind of things). Sitting shotgun, I was playing some tunes on Apple Music, with my phone comfortably resting on my lap. As we reached my friend's place, the night that was to follow flashed past my eyes, making me a little giddy with excitement. That is when, the inevitable happened. As I opened my car door to step down, my beautiful gold iPhone 6 (in it's lovely darth vader back cover, complete with a tempered glass) fell down from the cozy confines of my lap, onto a graveled road. I lunged to grab 'my precious' and for a moment wished that the 3 second rule would apply here as well. But Alas! to my utter disappointment, the force was not strong with my vader covered iPhone, and the IPS LCD display had shattered beyond repair. That night was definitely done for, and it would not be the only such night in my life.

I am a clumsy person when it comes to handling devices. I, as all of us do, use my smartphone as an extension of myself. We probably spend more time with our devices than our spouses (a constant complaint I have with mine). According to recent studies, we spend anywhere between 2-3 hours on our smartphones every day. Add to that, we spend a king's ransom on buying these devices, we then while away the leftover scraps of money on buying covers and screen guards to protect these devices. But, all this is done to no avail, as even after years of smartphone innovation, the arch nemesis of our phones is a still something as basic as the reason for the famous fallen apple- Gravity.

Remember the old Nokia 1100 or even the IBM communicator or maybe the Motorola StarTAC? I remember them, and I also remember throwing them on walls in fits of childish rage or just plain dropping them on roads while riding around on scooters. Boy were these phones tough! They would just not break, and the worst that would happen to these phones was that the battery and back cover would fall a mile apart, just to be picked up and brought together again.

The same can definitely not be said for the smartphones we use today. Pick up any durability study on smartphones and you will find all the popular smartphones of our day featured high on the list for the most breakable gadgets in the world. Some popular examples from such a list include- iPhone 6, iPhone 6 plus, Nexus 6p, iPhone 5c, Galaxy S4, Moto X...the list goes on. When one sees names like these on such lists, one can't help but wonder- What has changed in the past few years to make smartphones so fragile? The reasons are many.

The first and foremost reason for decreasing durability of smartphones can be attributed to the display and battery. If you pick up an avegarge smartphone today, the two biggest components of any device would be the display and the battery (duh!). As far as displays are concerned, most smartphones today sport Glass, while some (Future Apple phones) sport Sapphire. Sapphire scores a 9 on the hardness spectrum whereas Glass is about a 5.5. Sapphire displays also offer great scratch resistance as compared to glass displays. So, while glass is definitely the loser here, Sapphire is no better, and is almost 5 times stiffer than glass, making it extremely prone to fractures. The final outcome of dropping both, phones with glass and phones with Sapphire, is the same- total annihilation. So with one major component of a smartphone disgraced, let's talk about the other - Battery.

As the smartphone war continues to wage, battery size has become one of the key differentiators in consumer buying behaviour. The problem with improving battery sizes though, is weaker skeletons for phones. While smartphone manufacturers continously increase power under the hood, the overall frame or chasis of the smartphone becomes smaller, thinner and lighter. When it comes to smartphones, probably one of the biggest design mysteries of all times has been to maintain a slim form factor and include a sizeable battery. Unfortunately, both have never gone hand in hand, making our smartphones pretty yet frail.

Another pressing reason contributing to the fragility of our smartphones is the device OEMs themselves. These days, smartphone makers are more focussed on getting the software right and pulling users into an ecosystem (the true smartphone war). Apple wants you to use an iPhone, an Apple TV, a MacBook and an iPad. Similar is the case for Samsung, Microsoft, Google and many others. In all this hullabaloo for your attention, smartphone manufacturers are compromising on build quality of devices. Also, since budget smartphones are the in thing, profit margins for manufacturers have decreased, resulting in a trend where these manufacturers make up the loss by buying cheaper labour, raw materials for building their phones. Yes, dear reader...you are being fooled.

While smartphone durability looks like an irreversable hex upon us mortals, this very ability of our smartphones to break at the slightest use of force has given rise to whole new industry. No, I am not talking about the accessories industry, which ofcourse was also a by-product of the same. I am referring to the gadget insurance industry. So, if you haven't already spent a bomb on your phone, these companies will squeeze out whatever is left and give you a protection against breakage or theft.

I remember simpler times when if my phone broke, I would just get it repaired from a service centre for a few thousand bucks. Now, thanks to proprietary technology, you can't just go to a third party service centre and expect them to replace original parts in your phone. A case in example was when I had broken by iPhone 6's screen for the nth time, I paid Rs. 8,000 for a regular LCD display as the Retina display cannot be sourced in the grey market (atleast not easily). On the other hand, when you go to OEM service centres, be ready to shell out anywhere from Rs. 25,000 to Rs. 30,000 to repair a brand like Apple. This is exactly where smartphone insurance companies come in. A popular smartphone insurance brand in India even has a hashtag campaign called #NoMoFo (No more phone phobia), to get to our deepest, darkest smartphone fears.

Given that we are absolutely terrified of losing our smartphones to a sudden death, one can't help but wonder- Why are there no official durability tests for smartphones? Yes, the tech industry definitely need to take a page or two from the books of the auto industry. Afterall, the revenue for both industries is in billions, and while crash tests for cars is a rule that cannot be flouted, smartphone manufacturers have no such headaches.

Did you know that a version of the iPhone 6, called the 'Falcon SuperNova Pink Diamond iPhone 6', actually costs $95.5 million, which is 10 times more expensive than the World's most expensive production car - the Maybach Excelero (Price- $8 million)? It is actually even more expensive than India's Mars Orbiter Mission or Mangalyaan, which costed approximately $75 million! Apart from the idiotic price difference, you definitely won't break the Excelero or Mangalyaan by dropping them from 5 foot wall.

So yes, smartphones may be killing us all with radiation, insomnia, obsessiveness and what not, but we are equally murderous for these devices. Smartphones are in grave danger from humans and it's time someone or something stepped up to save these devices, that save us so much trouble.