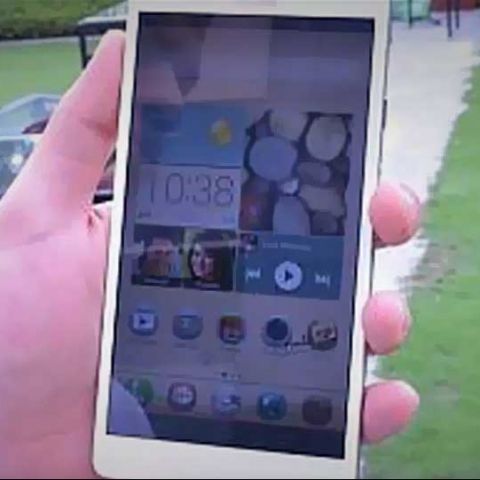 Huawei today announced the launch of the Ascend Mate phablet in India. The device is priced at Rs. 24,900. We spent some time with the phablet at the launch event. Here are our first impressions.

The market today is flooded with a wide array of smartphones and tablets and a third category of devices that blurs the lines between the first two. For convenience sake we call them phablets. Up till today the average size of a phablet has been 5 to 5.5-inches. Recently we have started seeing devices launch with bigger displays. One such example is the Samsung Galaxy Mega 6.3. As the name suggests the device has a 6.3-inch display and boasts of some impressive specifications. You can catch our hands on with the Samsung Galaxy Mega here.

The Galaxy Mega 6.3 is available at the Rs. 30,000 price point to consumers. Today, Huawei has entered the 6-inch phablet war with the launch of the Ascend Mate in India. The Mate has a 6.1-inch display and is priced at Rs. 24,900, which is quite attractive considering the competition. To start with, the Ascend mate runs on Android 4.1 Jelly Bean and has Huawei’s Emotion UI. Just like Sense from HTC or TouchWiz from Samsung, the Emotion UI tries to bring some features to the table that will distinguish it from the plethora of Android smartphones available in the market.

The Ascend Mate doesn’t have an apps or widget listing found on all other Android devices. All the apps are housed on the home screen – very iOS-like. When customizing the home screen with widgets, the bottom half of the display has the widgets and the top half has the home screens making the interface of quite seamless.

Just like we have seen on Samsung and a bunch of other devices, the Ascend Mate too offers users the ability to house floating apps on the Ascend Mate. You can have apps such as the notes, browser and more open on the phablet as separate windows or floating apps to work on giving you the feeling of true multitasking. The UI also gives you the ability to control the number of home screens. You can take a look at all the features that the Emotion UI has to offer in the video below.

Coming to the power under the hood of the Ascend mate, the 6.1-inch IPS display has a 1280x720 pixel resolution giving it a pixel density of 241ppi. The display also comes with Corning Gorilla Glass protection. The rear of the smartphone has the 8MP camera and the front has a 1MP camera. We will comment on the quality of images from the camera when we have put the device through its paces. Apart from DLNA, the Ascend Mate also comes with AirSharing, yes that is the name of the app that lets you share content. A Quad-core 1.5GHz processor and 2GB of RAM power the Ascend Mate.

Considering the size of the smartphone, it is quite slim at 9.9mm and quite light 198grams. The device is quite comfortable to use if you use both your hands, but it isn’t the most comfortable for single hand operations. The device does have some singe hand operation features for the keyboard (basically squeezing the keyboard to one half of the display), but it isn’t the most comfortable for real world usage.

The front of the Ascend Mate has the 6.1-inch display and the front facing camera. Just like the Nexus experience, the back, home and multitasking buttons are a part of the display rather than being housed below the display as capacitive buttons. The right of the device has the power button along with the volume rocker. The rear houses the camera and the LED flash. The bottom has the microUSB port and the left of the phablet has the microSD card slot. The top has the 3.5mm headphones jack and a slot for the SIM card.

Overall the design and build of the phablet is quite good and it does feel big in ones hands. The UI is a refreshing change when compared to the available skins for Android in the market. How it translates in the real world is something that we will comment on once we have the device in for review.

If you are in the market to pick up a phablet you can choose between the Huawei Ascend mate and the Samsung Galaxy Mega 6.3. Take a look at a comparison between the specifications below.