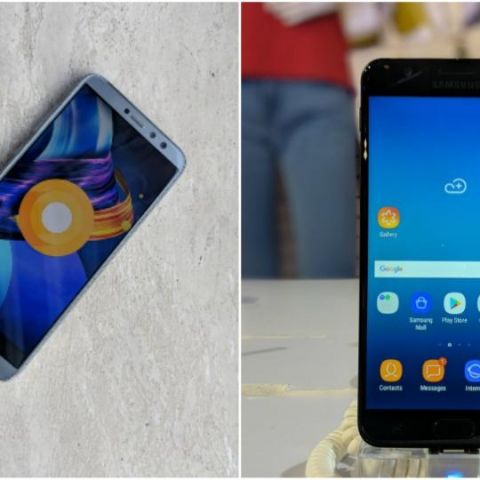 Honor and Samsung both have launched their latest mid-range smartphones targeting consumers who are willing to spend between Rs 11,000 to Rs 15,000. The Honor 9 Lite (first impressions) is a somewhat premium variant of the Honor 9i and it’s not clear yet whether it’s a replacement for the Honor 7X as its launched around the same price. The Galaxy On7 Prime is the successor to the last year’s Galaxy On7 Pro and it competes directly against the Honor smartphone. Even though both the smartphones are priced at a similar price point, they have different hardware and we can surely expect varying features and performance as well. 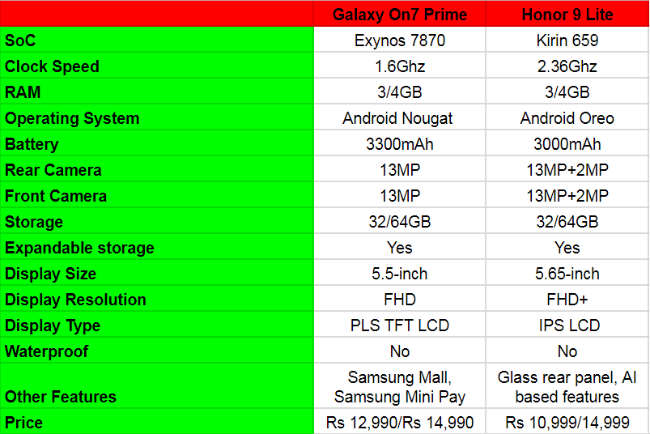 Both Samsung and Honor have equipped the devices with their own processors. The Honor 9 Lite is powered by a HiSilicon Kirin 659 SoC, whereas the Galaxy On7 Prime runs on the Exynos 7870 platform. The Kirin 659 is clocked at 2.3GHz and also comes with low power cores which operate at 1.7GHz. The Exynos 7870 can reach max clock speeds of 1.6GHz, which is considerably lower than the Honor processor. The Honor 9 Lite and the Galaxy On7 Prime are available in 3GB RAM/32GB ROM variants and a 4GB RAM/64GB ROM model.

The Honor 9 Lite is standing ahead of the competition as it runs on Android Oreo out-of-the-box, whereas the Galaxy On7 Prime still runs on the dated Android Nougat. As both the smartphones feature their own UI’s layered atop their respective Android versions, it’s difficult to say which device offers a smoother experience without an in-depth analysis. We will elaborate more on the performance of the handsets in their reviews.

In terms of design, the Honor 9 Lite sports a glass rear which is aesthetically pleasing but is also prone to damages and scratches. It sports a minimalistic design with very few elements but is made with the aim of catching eyeballs. The Galaxy On7 Prime sports a brushed aluminium unibody design but retains the generic “Samsung” design, which feels quite dated.

Starting with the Samsung Galaxy On7 Prime, it is equipped with a 13MP single rear and front-facing camera sensor. Both the cameras come with a f/1.9 aperture lens but only the main camera supports autofocus.

The Honor 9 Lite takes the lead here as it features a quad camera setup. The smartphone comes with 13MP+2MP dual sensors on both the rear and front and is capable of capturing bokeh shots with the front facing camera as well. The rear camera is supplemented with an LED flash and supports PDAF.

The Samsung Galaxy On7 Prime also targets shopping-centric consumers with its AI-based features. It is pre-loaded with the Samsung Mall app, which offers features like Visual Search, All-in-One Shopping and Universal Cart. The Visual Search feature option allows users to select any image from their gallery and search multiple shopping sites for the product. All-in-One Shopping works as an online shopping website aggregator allowing users to shop across multiple online shopping sites using a single interface, while the Universal Cart option allows users to add products from multiple websites to a single cart for review and purchase.

Honor has also touted the AI-based features of its Honor 9 Lite that come into play while capturing images. It's AI makes use of an upgraded "beauty algorithm" which is said to recognise facial structure, features, and enhance images based on gender beauty mode and Portrait mode 2.0. AI is also integrated with EMUI 8.0 and the F2FS file system. Honor says it results in optimized system caching and more effective defragmentation, due to which the device doesn't slow down over time