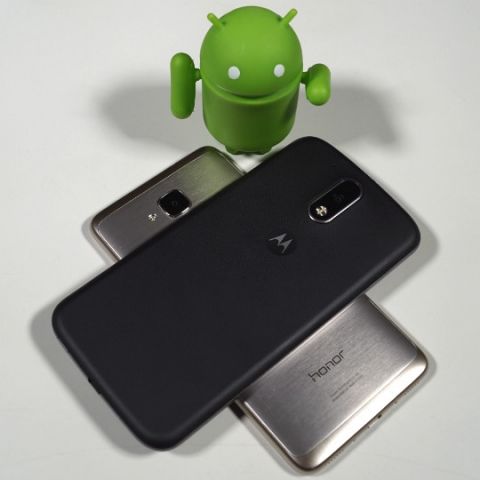 The category of budget smartphones happen to be one of the most popular segment of electronics in India. Today has remained in line with how most of our days go. Huawei launched the Honor 5C earlier today, and the Moto G4 goes on sale as the clock strikes midnight tonight. While the Honor 5C is priced at Rs. 10,999, the Moto G4 is priced at Rs. 12,499. Naturally, this calls for a direct comparison in terms of what the two devices have on offer, and this is what we decided to do. 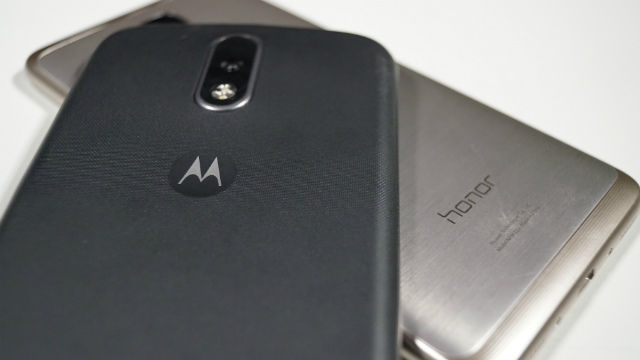 Before further explanation, it is crucial to note that this is not our final judgement on the performance and other aspects of the devices, but only a prelude of what you should expect from the two budget smartphones. We begin our comparison by pitting the specifications of the two devices:

While the Honor 5C is the smaller of the two, and even has the smaller display of the two, the Moto G4 is very marginally lighter. In reality, with the Moto G4 being larger in size, it feels lighter than what it is as the weight is distributed more uniformly. Both the devices house 1080p Full HD display panels, and even same capacity battery packs. While the Honor 5C is powered by the Kirin 650 SoC, the Moto G4 is powered by Qualcomm’s Snapdragon 617. This is the same SoC that powers the HTC One A9, too, but in terms of benchmarks, does not manage to outperform the Kirin 650 on the Honor 5C. Both the devices house 2GB of RAM and 16GB of inbuilt storage, with support for 128GB of expandable storage. While the Moto G4 runs on an updated version of Android Marshmallow (v6.0.1), the Honor 5C runs on Marshmallow’s initial version (v6.0). 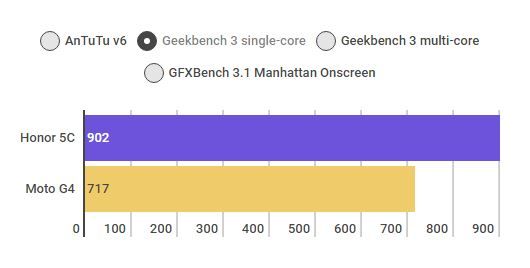 On paper, it would seem that the two devices are very similar. In benchmarks, the benchmark scores tilt in favour of the Honor 5C. The Kirin-powered device outscores the Moto G4 by nearly 20 percent in Geekbench’s core processor performance, 14 percent in AnTuTu’s core and graphics performance, and about six percent in GFXBench’s GPU performance ratings. In the OpenGL 3.1-based GFXBench Manhattan 3.1 benchmark, the Honor 5C render 299.6 frames, while the Moto G4 renders 279.3 frames. The difference in performance metrics is particularly noticeable in Geekbench’s multi-core performance test. While the Honor 5C scores 3,924 points, the Moto G4 scores 3,086 points. Both the processors are octa-core units, with the Kirin 650 housing a peak clock speed of 2GHz and the Snapdragon 617 with peak clock speed of 1.5GHz. 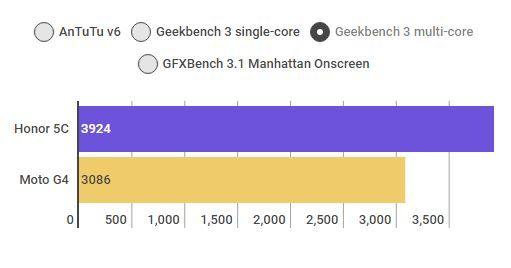 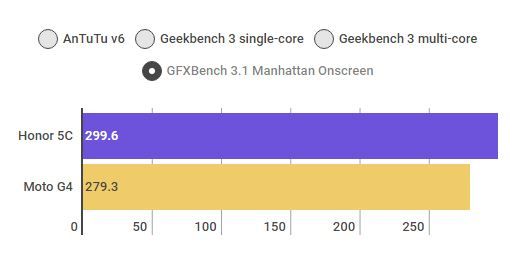 Although we have not put the two devices extensively through the paces, benchmark scores and initial usage points at Honor 5C being the better performer of the two. Additionally, the Moto G4 is priced about Rs. 1,500 higher than the Honor 5C, which gives more reason to see the scales tilt towards the Honor 5C. Initial tests (solely based on synthetic benchmarks and initial performance tests) point at Honor 5C being the better device to buy. Watch this space for in-depth analysis of the two devices.