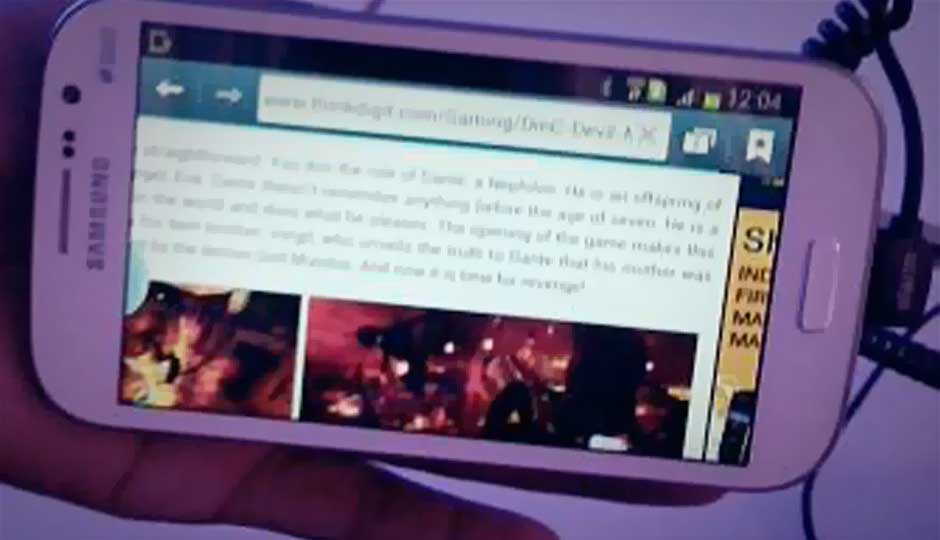 Samsung was the manufacturer that nailed the phablets category with the launch of the Galaxy Note in late 2010. They launched the Note II in 2012, which was a follow up to the original Note and was well received.

Today, at the launch of the Samsung Galaxy Grand Duos, the company’s first mid-range phablet, and we got some hands on time with the device at the event. Here’s what we thought of it:

Let us start with the specifications that the Galaxy Grand I9082 brings to the table. It has a 5-inch WVGA TFT display with a relatively low 480x800 resolution. Under the hood, it has a 1.2GHz dual-core processor and 1GB of RAM. It runs on Android 4.1.2 Jelly Bean straight out of the box and has Samsung TouchWiz UI. The device weighs in at 162 grams. It has 8GB built-in storage expandable up to 64GB via a microSD card. It has an 8MP rear camera with a BSI sensor and the ability to record video in full 1080p HD, apart from a 2MP front facing camera. It has Bluetooth 4.0, 3G and Wi-Fi connectivity, and is powered by a 2100mAh battery.

We are disappointed to see that the resolution of the display is just 480x800 pixels. Yesterday Micromax launched its next generation of phablets, with the A116 Canvas HD, pricing it at under Rs. 15,000. The Canvas HD has a 5-inch display with a 1280x720 pixel resolution. The A116 also has a quad-core processor where as the Grand sticks to a dual-core processor.

The look of the Samsung Galaxy Grand is the same as the Galaxy S III. It has one physical home button and two capacitive buttons (menu and back) on either side. If you are one who has used an Android powered Samsung device, especially the Note II or the S III, you will feel right at home with the user interface. TouchWiz is the same as it is on other Galaxy devices keeping it in tone with the Galaxy family.

The Galaxy Grand is quite a slim phone measuring in at 9.6mm thin. True to Samsung tradition the rear of the device has a plastic finish. It also houses the camera. The top of the phone has the headphones jack.

The Galaxy Grand’s keyboard is the same that we saw on the Note II and it was quite comfortable to type on.

Just like the S III and the Note II, you can play a video in a small screen and continue working on the device. It is nifty and shows the true multitasking capabilities of the device and the OS. The swipe down menu gives you access not only to the notifications but also to some shortcuts as well such as brightness, Wi-Fi, sound, Bluetooth and more.

We browsed a bit of internet on the Galaxy Grand and the web page rendering was fast and smooth. Pinch to zoom also felt smooth as butter. The 8MP camera on the device also clicked some good pictures.

Using the Galaxy Grand’s general interfaces felt smooth and there was very little lag. But we will reserve our final judgment of the device when we get our hands on a unit for review.

Some Samsung apps such as S Voice, Smart Stay (the display won’t go to sleep if it knows that you are reading), All Share, Chat On and more are also present on the Galaxy Grand. Now, at first glance they do seem similar to the ones we have seen on the S III and the Note II and there was no visible difference in the look or performance of the apps but again, we will take a detailed look at it once we have the review units amongst us.

With the Galaxy Grand, Samsung has introduced a new service called My Service. This service aims at giving users access to a plethora of local content. It gives users access to My Movies (a library of more than 2000 movies), My Music (3 lakh songs in collaboration with Hungama), My Education (1,200 text books, 60 video books and 150 assignment papers based on the CBSE board) and My Mobile TV (100 live TV channels). All these services are in addition to the Google Play store that gives access to a plethora of free as well as paid apps.

What do you think? Is the new Samsung Galaxy Grand phablet worth a price of Rs. 21,500? Let us know in the comment section below!